Italian medical personnel check out a "victim" of a chemical spill Thursday at Camp Darby, Italy. Rhino Shake, an annual mass-casualty exercise involving base personnel and Italians from several surrounding communities, effectively shut down the base for half a day. (Kent Harris / S&S)

Italian medical personnel check out a "victim" of a chemical spill Thursday at Camp Darby, Italy. Rhino Shake, an annual mass-casualty exercise involving base personnel and Italians from several surrounding communities, effectively shut down the base for half a day. (Kent Harris / S&S) 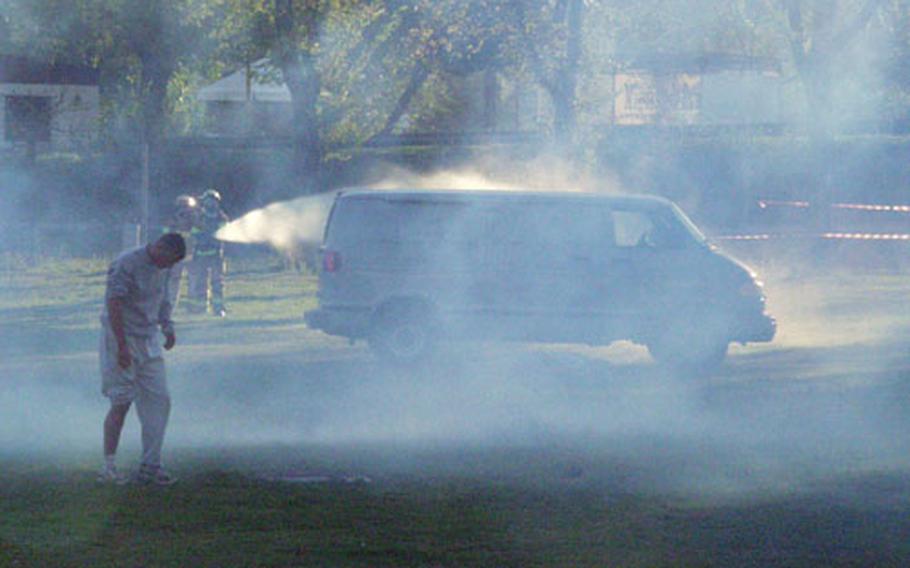 A soldier from the Minnesota National Guard portrays a victim of a chemical spill Thursday at Camp Darby, Italy, while personnel from the base fire department try to spray down the truck responsible for the mock disaster. (Kent Harris / S&S)

The exercise, dubbed &#8220;Rhino Shake,&#8221; was a staged disaster designed to test the reaction and cooperation of the American and Italian medical, security and fire safety personnel.

&#8220;The real key is participating together, so when the real thing happens, everyone knows what to do,&#8221; said Doug Haines, Camp Darby&#8217;s force protection officer.

Haines said organizers expected problems, which is why the exercise was held.

This year&#8217;s scenario involved a van, which was carrying leaking ammonia, crashing through the perimeter fence. Not only was the driver incapacitated, but nearly a dozen others were affected &#8212; some fatally &#8212; as the substance billowed across the base.

The base&#8217;s fire department was the first to respond, with members of its Italian counterpart from Pisa &#8212; the Vigili del Fuoco di Pisa &#8212; arriving shortly afterward in silver space suits.

Teams from both departments hosed down the area, as well as a few of the victims, who in this case were soldiers from the Minnesota National Guard. The guardsmen are deployed to Italy to help with U.S. force protection.

&#8220;We knew we were going to get wet,&#8221; said Pfc. Jason Hastings, making a miraculous recovery soon after being declared dead in the exercise.

Even though they are from the cold climates of Minnesota, the water from the firetrucks combined with chilly morning temperatures still gave the guardsmen visible shivers as they waited for medical personnel to arrive.

After the Italian medical personnel arrived, emergency personnel sorted through the wounded, set up makeshift facilities and treated the victims.

The exercise ended with those involved evaluating how things went.

Giuseppe Evangelista, who coordinates the emergency response effort in Pisa, said through an interpreter that the exercise is valuable for the Italians to check response times and use equipment that they don&#8217;t operate often.

A few of the Italians spoke English, but interpreters were also on hand to assist. Haines, who speaks Italian well, said language is &#8220;always a factor. That&#8217;s probably the hardest part [of the exercise].&#8221;

What makes a Rhino Shake?

Doug Haines, force protection officer at Camp Darby, admits he came up with the name of the now annual mass-casualty exercise at the northern Italy base.

Part of the name comes from the annual mass-casualty exercise in Vicenza, dubbed &#8220;Lion Shake.&#8221; That name was originally conceived because Vicenza&#8217;s mascot is the lion, and the first exercise there involved a simulated earthquake.

But what about the rhino part?

And so the name stuck.

This was the third Rhino Shake exercise. The first involved a simulated airplane crash in the Air Force&#8217;s ammunition storage area.

Last year, there was a hostage situation on the adjacent Leghorn Depot.