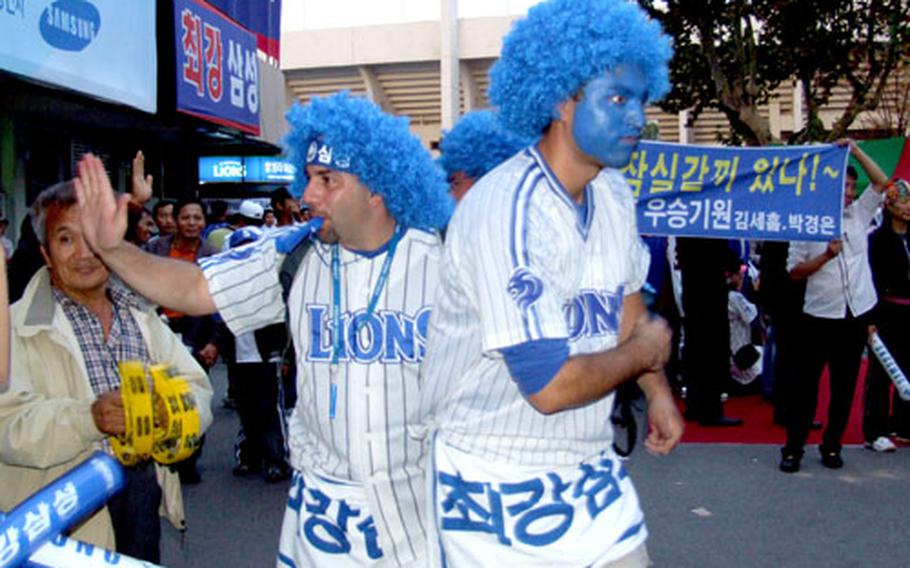 Jeff Mondella, left, and Kenny Lamothe dance last month in support of the Samsung Lions in Daegu, South Korea. Both are civilian contractors working for the U.S. military at Camp Walker. (Courtesy of Jeff Mondella)

PYEONGTAEK, South Korea &#8212; Three Americans working for the U.S. military in South Korea are such ardent fans of a local baseball team that their Korean counterparts see them as a fixture.

For about two years, they&#8217;ve been traveling from city to city to root for the Lions.

This year alone, Mondella has made it to 14 games played variously in Daegu, Daejon, Busan, and as far north from Daegu as Seoul and Incheon.

They&#8217;ll show up in the stands in blue and white Samsung Lions jerseys and ball caps. At times, they&#8217;ll don blue wigs and blue face paint.

The Lions&#8217; management honored them as among its outstanding fans at a February ceremony.