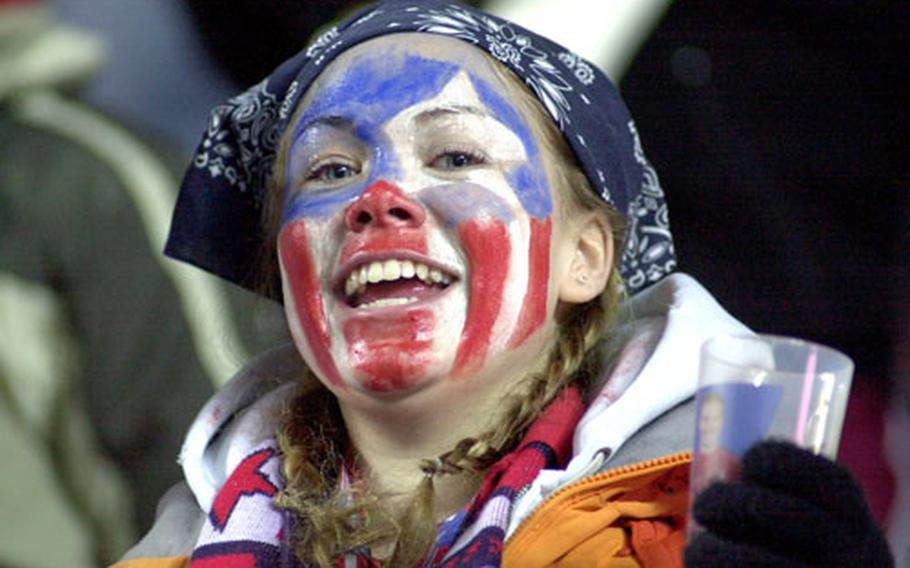 With her face painted red, white and blue, Cortney Mullen cheers on the American national soccer team in a friendly match against Poland in Kaiserslautern, Germany, in March. The U.S. will take on Italy at the stadium Saturday. (Michael Abrams / S&S)

With her face painted red, white and blue, Cortney Mullen cheers on the American national soccer team in a friendly match against Poland in Kaiserslautern, Germany, in March. The U.S. will take on Italy at the stadium Saturday. (Michael Abrams / S&S) Tents and vending stands have been erected to the streets leading to Kaiserslautern’s Fritz Walter Stadium. On Monday the city will host its first World Cup game when Australia takes on Japan at 3 p.m. On June 17, the U.S. meets Italy in Kaiserslautern. (Steve Mraz / S&S)

While the World Cup officially started Friday with Germany&#8217;s 4-2 win over Costa Rica, the granddaddy of all soccer tournaments really gets under way for Americans on Monday for two reasons.

First, the U.S. team plays its first game of the 2006 tournament at 6 p.m. when it faces the Czech Republic in Gelsenkirchen.

Second, Kaiserslautern, Germany, home to about 50,000 Americans, hosts its first game of the tourney at 3 p.m. when Australia meets Japan.

And if Kaiserslautern is reflective of what&#8217;s going on in the other host cities, expect lots of traffic, lots of security and lots of fun in downtown areas on game days.

Actually, since Kaiserslautern is the smallest of the 12 German host cities, you can probably multiply what&#8217;s happening there a few times to get an idea of what World Cup mania is like in Munich, Frankfurt, Nuremberg or Berlin.

During the 2002 World Cup when the co-host nation, South Korea, lost its semifinal game to Germany, Korean police officials estimated 7 million people were on the streets of the country. Each time South Korea played, normal life stopped. People blocked traffic, dragged TV sets outside to watch the action and danced in the streets, covering themselves with the South Korean flag and singing the national anthem.

U.S. military members stationed there were swept up in the excitement.

That scenario could play out in Kaiserslautern, with its large concentration of U.S. troops, and in Stuttgart, another host city that is also home to U.S. servicemembers. In addition, Frankfurt and Nuremberg are within easy reach of large numbers of Americans.

Before wading into the action, plan accordingly.

The potential for traffic problems and difficulty getting students to and from school has resulted in classes being canceled Monday for the 11 Department of Defense Dependents Schools in the Kaiserslautern military community, said Dennis Bohannon, DODDS-Europe spokesman.

But what about soccer fans who want to get to a game or one of the public viewing areas?

Use the park-and-ride system or take the train, said Michael J. Pletsch with the 569th U.S. Forces Police Squadron on the Air Force&#8217;s Vogelweh installation.

However, traffic on the autobahn should be moving, although it is expected to be heavier than normal, Pletsch said.

Security also will be tight. Twenty-one World Cup games have been identified by the German Federal Criminal Agency as high-risk targets for terrorist groups. Three of the U.S. games, including the U.S. versus Italy match in Kaiserslautern on June 17, are on the list.

Other games are expected to draw crowds of hooligans who have traveled to Germany to take part in brawls and confrontations with fans from rival nations. German police are reporting that some confrontations are being organized in advance.

And in some cases, U.S. security specialists say, political extremists have planned demonstrations in host cities on game days, adding to the explosive mix.

Kaiserslautern organizers expect 50,000 spectators in the stadium and 30,000 in the public view areas on game days.

If you do not have a ticket, avoid going near the stadium, Pletsch advised. He said everyone entering the stadium will be searched. And the police presence in downtown Kaiserslautern on game days will be strong.

Officials with U.S. Army Europe and the Air Force reminded all those planning to participate in World Cup festivities to maintain their awareness.