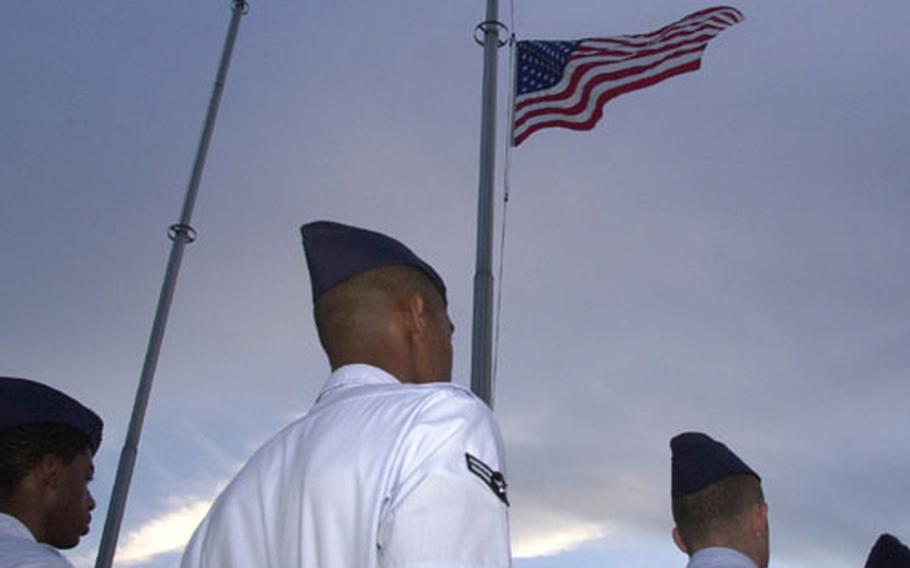 On Sept. 11, 2001, American Flight 77 ripped into the Pentagon 10 feet below his desk. That morning, Bolas was e-mailing his active-duty daughter in Germany. They were discussing the terrorist attacks on the World Trade Center twin towers, when Bolas&#8217; daughter wrote that she was surprised the Pentagon had not been evacuated.

Bolas never saw that e-mail until later: At 9:43 a.m., he was knocked clear from his chair and watched stunned as a wall of fire &#8220;banged&#8221; against his window, the ceiling crumbled and the floor sunk.

Bolas shared his story after a somber ceremony at Camp Zama on Thursday night to remember the more than 3,000 victims who died in the Sept. 11 terrorist attacks, as well as those killed during the ongoing war on terrorism.

It was one of many memorial observances Thursday at U.S. military bases across the Pacific.

They included: Yokota Air Base, a candlelight vigil; Atsugi Naval Air Facility, a service followed by a moment of silence in the chapel&#8217;s Garden of the Good Sheperd; Yokosuka Naval Base, a base-wide moment of silence and a wreath-laying ceremony; and a &#8220;Tribute to Freedom&#8221; memorial service at Yongsan Garrison, South Korea. Memorial ceremonies also were planned at Iwakuni Marine Corps Air Station, Japan, and at Kunsan Air Base and Camp Red Cloud, South Korea.

Zama officials called their event a requiem &#8212; &#8220;a musical expression for the repose of the dead.&#8221; The ceremony was all song and instrument, provided by the U.S. Army Japan Band and the Shunji Greg Sakita Tokyo Choir. The only spoken words came during music breaks, when the sequence of events on Sept. 11, starting with the four hijacked planes on the East Coast, were read aloud.

Some in the audience wiped their eyes or hugged a neighbor when Staff Sgt. Eric Schmidt sang a spirited rendition of Daryl Worley&#8217;s emotional single, &#8220;Have You Forgotten?&#8221; based on the attacks.

Chris Howard, a retired Air Force master sergeant, didn&#8217;t expect to feel such an intensity of emotions two years after the tragedy.

Bolas, who escaped from the Pentagon unscathed, tries to focus on the stories of hope that have emerged two years later.

The U.S. Army Japan inspector general, Bolas recently returned to Washington, where he came upon a newspaper article about a Pentagon survivor on the long road to recovery. In the chaotic hours after the plane crashed into the Pentagon, Bolas helped the man&#8217;s frantic wife locate him at a burn center emergency room.

Rodgers, commander of Zama&#8217;s 78th Aviation Battalion, also walked out of the Pentagon unharmed on Sept. 11. He uses his memories of the event to focus on the personal lessons learned that day: &#8220;I tell the soldiers here that regardless of whether you&#8217;re in Japan or on vacation somewhere else, you need to be vigilant wherever you go. Americans are targets throughout the world.&#8221;

An events coordinator for the NBA as a civilian, Roiy was activated from the Reserves two months after the terrorist attacks. After an involuntary one-year mobilization to Japan, she volunteered to stay another year.

No one from her immediate family was killed in the attacks, but she lost friends, as did her family: Her father, a retired New York City fire lieutenant, went to 19 funerals in two weeks. In the tragedy&#8217;s aftermath, Roiy did what she could by making food for workers at Ground Zero and packing groceries for the victims&#8217; families.

&#8220;When the government called me up and said, &#8216;Put on your uniform, we need you for Operation Enduring Freedom,&#8217; it made me feel like I could come over here and do something significant for my country,&#8221; she said.

As long as the war on terrorism continues, Roiy said, it&#8217;s important to hold memorial observances on the anniversary of the attacks.

To this day, Shivers keeps a photo of the Pentagon on her desk along with an American flag that was given out at the Pentagon memorial service on Oct. 11, 2001. &#8220;For me, it keeps things in perspective of what truly constitutes a bad day,&#8221; she added.

&#8220;While most people understand the necessity, some people still don&#8217;t get it,&#8221; she said. &#8220;They feel personally imposed upon by things like waiting in long lines at the airport; having parking cordoned off so you have to walk farther; having bags searched at various venues; and needing to repeatedly show identification.