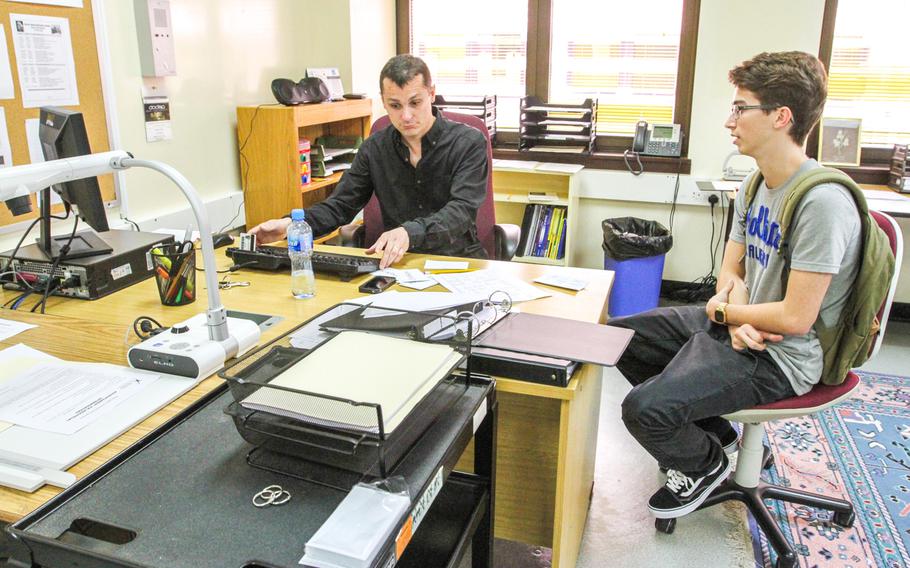 Michael Esposito, an 11th-grader, gets advice about his post-high school options from French teacher Philippe Frerot on the 2nd day of class at the DODDS-operated Bahrain Middle/High School, Aug 25, 2014. (Hendrick Simoes/Stars and Stripes)

MANAMA, Bahrain — U.S. officials here are urging Americans living in the Persian Gulf kingdom to remain vigilant following an anonymous threat posted on a jihadist website calling for attacks against American and other Western teachers at international schools in the Middle East.

A message from the U.S. Embassy to Americans citizens and later posted on Naval Support Activity Bahrain’s official Facebook page, said “extremists groups and individuals continue to circulate information through social media and other messaging avenues to illicit attacks against those targets they deem to be anti-Islam and/or anti-Muslim.”

The intent of the messages appears to be to frighten diplomats and other foreigners to leave Gulf nations.

The embassy’s message comes amid increased force-protection measures and security warnings for U.S. military personnel. The Army sent a memo in September warning against potential threats posed by the Islamic State, its followers and others influenced by radical Islam. Also, the U.S. European Command issued new guidance encouraging commands across Europe to examine their policies on wearing uniforms off base.

In late October, a court in Saudi Arabia sentenced 27 people to prison for planning a series of attacks against U.S. forces in Qatar and Kuwait, according to The Associated Press, citing official media reports.

Bahrain is home to the U.S. 5th Fleet, and has about 8,200 U.S. personnel, including family members, living in the country. Many American children attend the Department of Defense Dependents Schools-operated Bahrain School in Juffair.