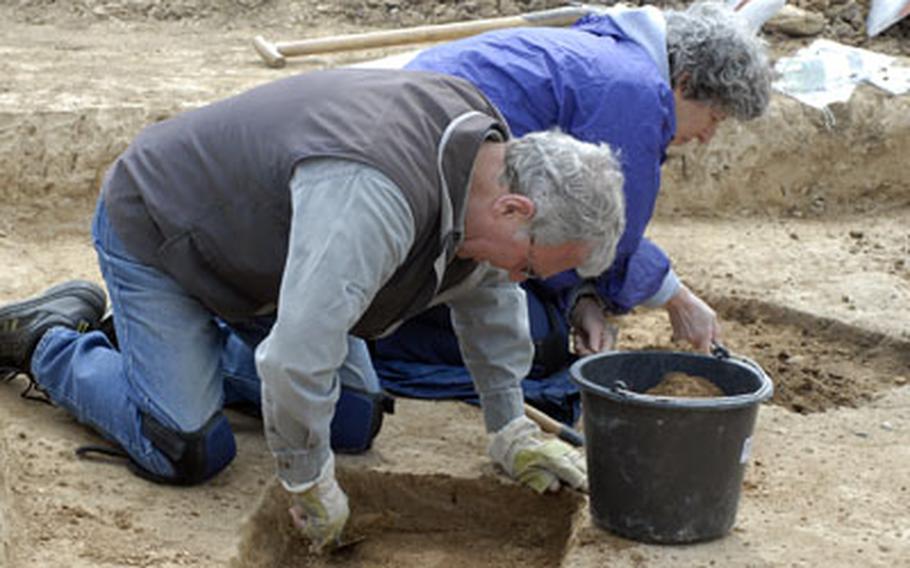 Buy Photo
The husband-and-wife team of Eric Robinson and Sue Zarutskie dig in the dirt searching for Roman settlement artifacts on May 5 at the construction site of a future $133 million Army Corps of Engineers housing complex adjacent to Wiesbaden Army Airfield. (Photos by Mark Patton/Stars and Stripes)

Buy Photo
The husband-and-wife team of Eric Robinson and Sue Zarutskie dig in the dirt searching for Roman settlement artifacts on May 5 at the construction site of a future $133 million Army Corps of Engineers housing complex adjacent to Wiesbaden Army Airfield. (Photos by Mark Patton/Stars and Stripes) 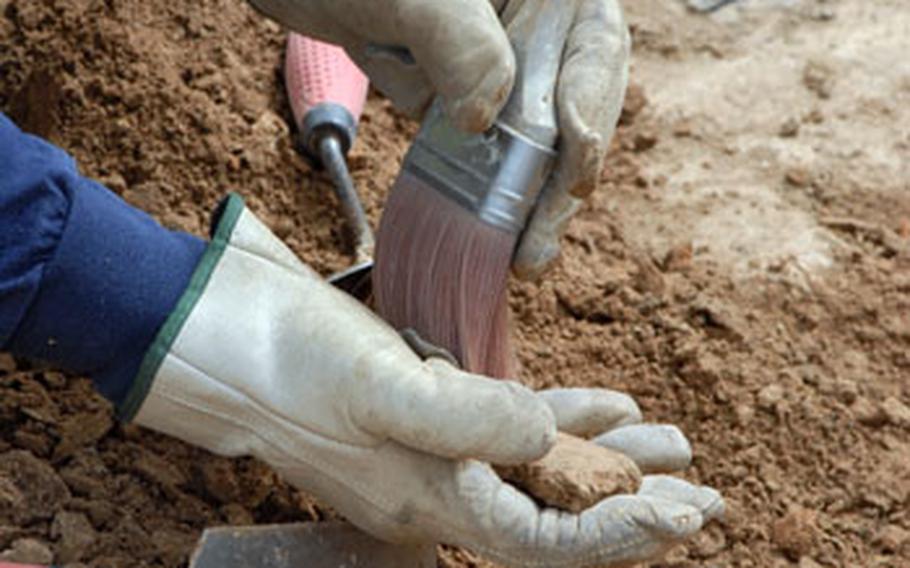 Army contractor Marty Howes brushes dirt off a possible artifact from a Roman settlement May 5. () 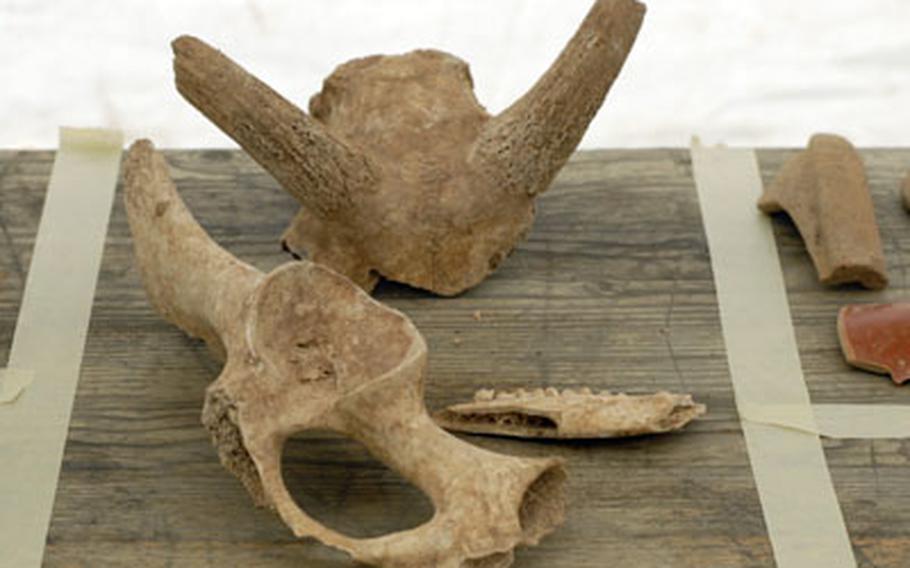 A sheep’s skull and teeth sit beside either bones from a horse or cow at the excavation site near the Wiesbaden Army Airfield. () 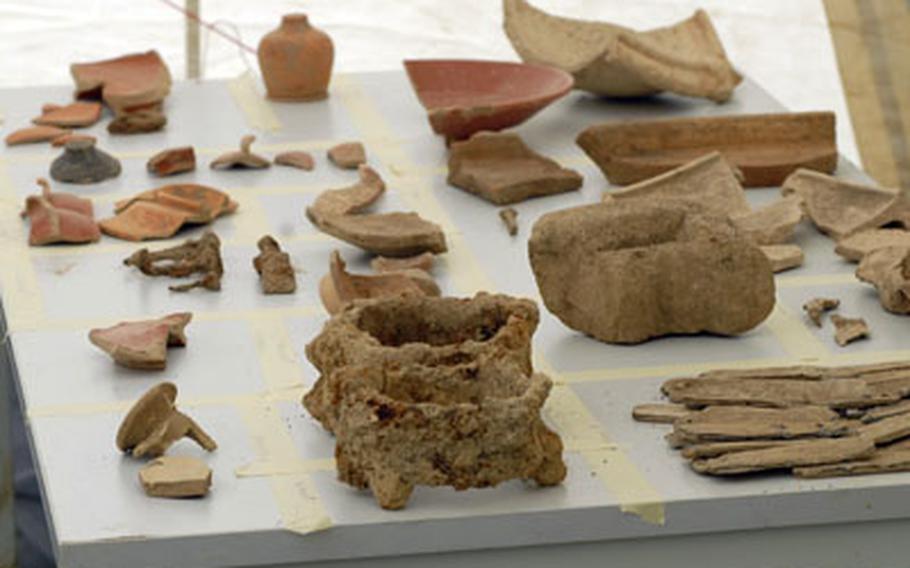 Artifacts from around the first century A.D. sit on display near the excavation site of what German archaeologists say was a Roman farming settlement. () U.S. Army contractor Marty Howes gazes May 5 at his recent discovery of a possible Roman settlement artifact. Howes has been working with German archaeologists since last month and said he has found “lots of interesting pieces of pottery from the Iron and Roman age.” ()

Members of the Hessen archaeology team are inviting Americans to join them through the end of June to finish their excavation and studies of the area before the start of a $133 million Army Corps of Engineers project.

So far, archaeologists have discovered artifacts from a Roman farming settlement dating to the first century, and they have recently found remnants dating back to the Bronze Age.

A geographical survey of the area was required before road construction for the housing area could begin, and archaeologists suspected they would find some artifacts because of the area&#8217;s setting, its proximity to Mainz, once a major Roman settlement, and the results of previous studies. Excavation on the site began last year.

It&#8217;s not easy work, as dirt is dug and painstakingly sifted through by those looking for artifacts.

"Part of it&#8217;s the mystery of what&#8217;s down there," said American Sue Zarutskie, who was taking a break from her regular job at the Amelia Earhart Playhouse in Wiesbaden in hopes of making a discovery. Her husband, Eric Robinson, dug by her side.

Excavation leader Marcus Jae admits to being skeptical when the idea of Americans helping the archaeologists first came up, but he says he has been proved wrong.

"The more people we have, the more we can rescue and excavate before it&#8217;s destroyed by construction teams," Jae said.

About 17 Americans a week volunteer on the site, he said, including two women who traveled from Bamberg and stayed in a local hotel and a retired colonel from Kaiserslautern.

The crew of German archaeologists, which consists of contractors and students from nearby Mainz University, were showing off their latest find Wednesday. A wooden well was discovered in close proximity to the Roman settlement.

"There was still wood preserved in the water, and the wood is important because we might be able to date the well by counting the rings on the wood," Jae said. He said it is possible the well was used as a tannery, which was commonly placed on the outskirts of a village because of its bad smell.

Another recent find was a 2,000-year-old wine cup, which was completely preserved. "There was no damage at all; you can still use it," Jae said.

Marty Howes, a contractor for the Army at the airfield, has been volunteering at the site since last month. Howes works until midnight at the airfield, but wakes up early each morning to go dig in the dirt.

"It&#8217;s nice to be able to work with them, they&#8217;re fighting the clock," said Howes, who has unearthed pieces of pottery from the Iron and Roman ages.

Air Force spouse Mary Freelove went so far as to hurry her resignation as an Army Family Readiness Group support assistant so she could work at the site.

"I&#8217;m the one that drags the kids through the natural history museum kicking and screaming," Freelove said. Although she didn&#8217;t find anything herself, she spent a day cleaning unearthed pieces and said it was "an incredible feeling" to hold something thousands of years old.

Wiesbaden Army officials said they plan to honor the future housing area&#8217;s Roman roots by incorporating a park-like setting with bench seating around the first well discovered by the archaeologists.