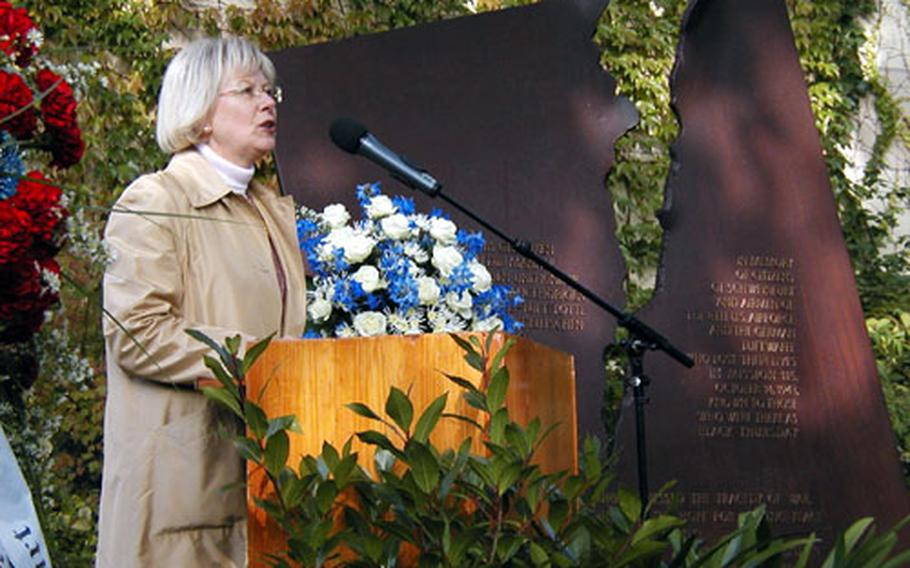 Lord Mayor Gudrun Grieser of Schweinfurt, Germany, stands among memorial wreaths in front of a monument commemorating the soldiers and civilians killed on “Black Thursday,” the epic Oct. 14, 1943, U.S. air raid on the city’s ball-bearing plants. About 200 Germans and Americans — including 14 veterans of the bombing raid by the 8th Air Force of the U.S. Army Air Force, and several German survivors — attended Thursday’s friendship ceremony on the 61st anniversary of the attack. (Keiko Kuraya Liewer / Special to S&S)

Lord Mayor Gudrun Grieser of Schweinfurt, Germany, stands among memorial wreaths in front of a monument commemorating the soldiers and civilians killed on “Black Thursday,” the epic Oct. 14, 1943, U.S. air raid on the city’s ball-bearing plants. About 200 Germans and Americans — including 14 veterans of the bombing raid by the 8th Air Force of the U.S. Army Air Force, and several German survivors — attended Thursday’s friendship ceremony on the 61st anniversary of the attack. (Keiko Kuraya Liewer / Special to S&S) 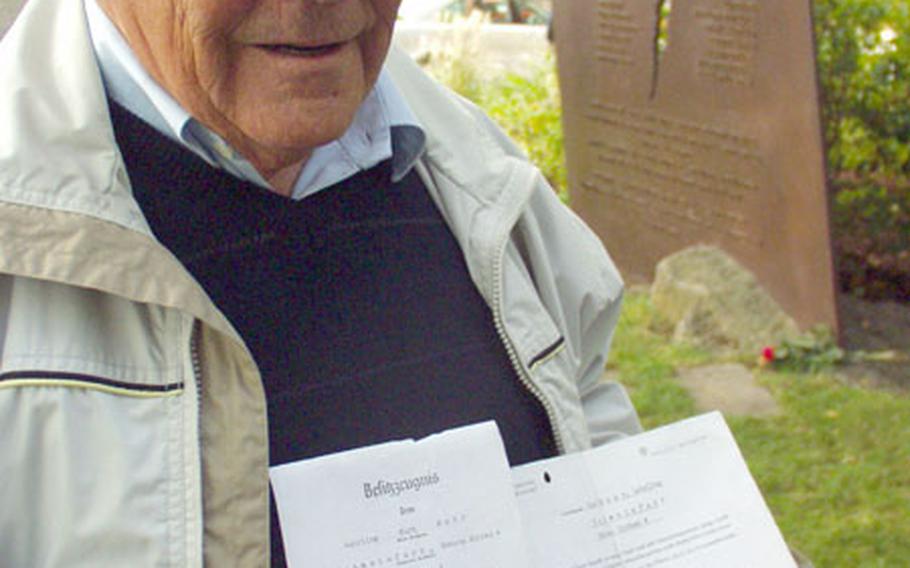 Kurt Mohr of Schweinfurt displays Nazi documents showing that he is a survivor of the Oct. 14, 1943, raid. Mohr, 76, was a teenage worker in one of the ball-bearing plants that day. He said he survived by hiding in an underground storage tank during the half-hour, which turned the plant into an inferno. (Steve Liewer / S&S) 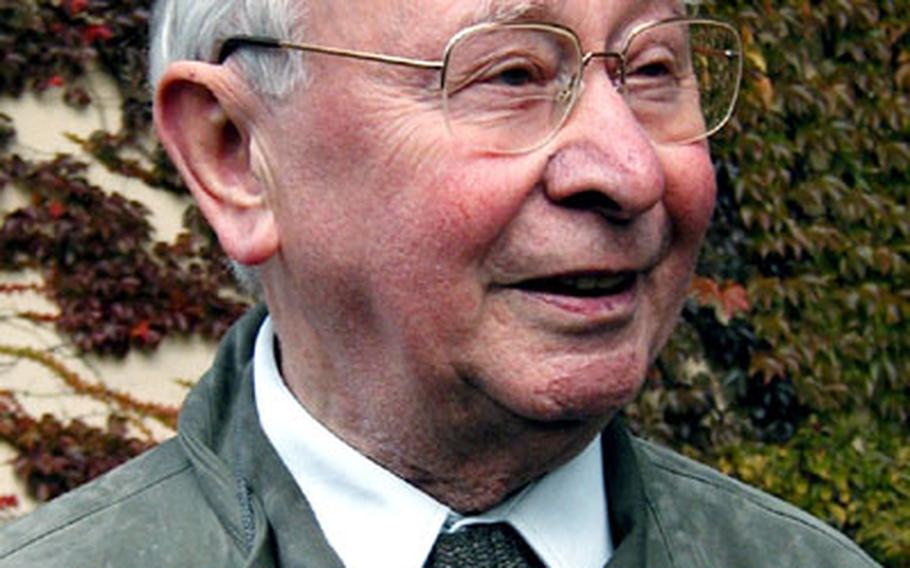 Gerhard Bellosa, then a 15-year-old "flak helper" responsible for firing German anti-aircraft guns, was at home with his mother during the raid of Oct. 14, 1943. (Keiko Kuraya Liewer / Special to S&S) 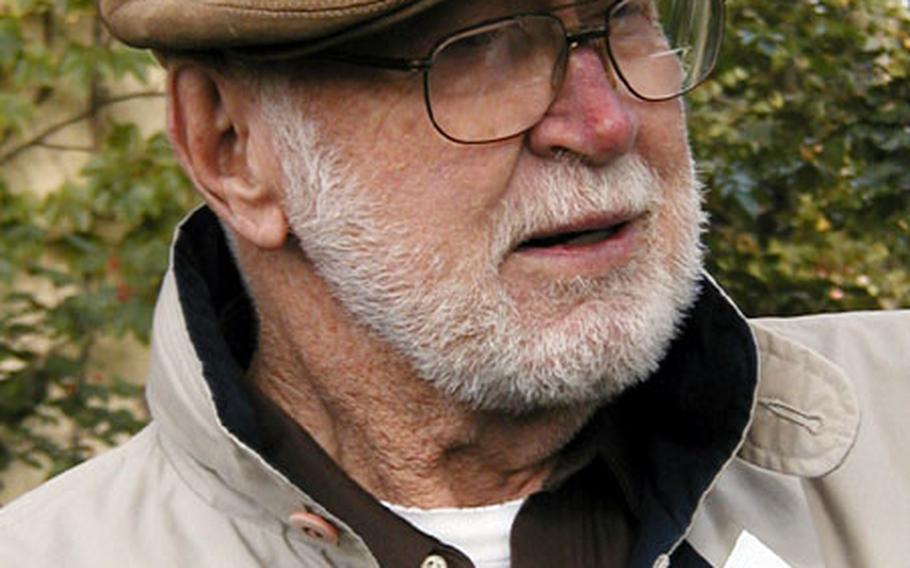 Then-Lt. Col. Arvid Dahl of Gig Harbor, Wash., was the lead pilot of the 379th Bomber Wing during the Oct. 14, 1943 "Black Thursday" raid against Schweinfurt, Germany. He was one of 62 Americans who traveled from the United States last week for German-American ceremonies commemorating the battle, which was devastating to both sides. (Keiko Kuraya Liewer / Special to S&S) 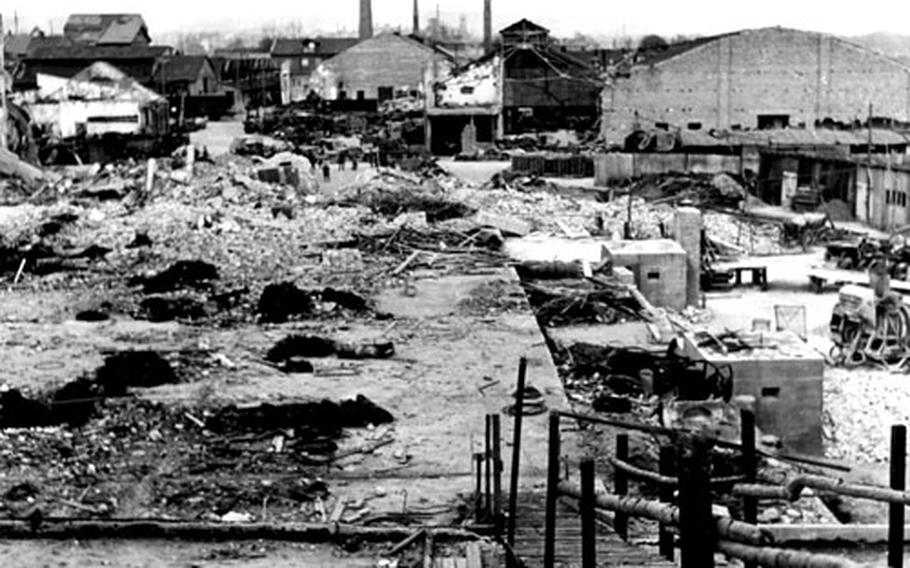 October, 1943: One of the ball-bearing factories hit during bombing raids on Schweinfurt by the U.S. Army Air Force lies in ruin. (S&S file photo)

SCHWEINFURT, Germany &#8212; By all rights, Arvid Dahl and Kurt Mohr should never have met.

One fall afternoon long ago, Dahl &#8212; then a U.S. Army Air Corps officer in the 524th Bomb Squadron of the 379th Bomb Wing &#8212; led his squadron of B-17 Flying Fortress bombers across hundreds of miles of enemy territory and dumped his load of bombs on the ball-bearing factories of Schweinfurt.

Beneath the factory where he worked, the 15-year-old Mohr lay huddled and frightened in a storage tank. At the end of the half-hour raid, during which more than 3,000 bombs were dropped on the industrial city of 50,000 residents, he ran through the burning wreckage of the building.

Unlike many of his co-workers, he got out alive.

They should have been enemies. But last week, 61 years after the day now called &#8220;Black Thursday,&#8221; the two men embraced and cried at a ceremony in Schweinfurt commemorating the friendship of Germany and the United States, and the hundreds of people on both sides who died that day.

&#8220;While this memorial recalls a darker time in history, when men as enemies fought for the cause,&#8221; John Noack, a veteran of the raid, said in his speech, &#8220;it serves as a challenge to find a better way to solve our differences.&#8221;

Noack and Dahl were two of the 62 Americans, including 14 veterans of the raid, who traveled to Schweinfurt last week for a week of commemoration and sightseeing. On Thursday, the anniversary of the raid, they attended a memorial church service and laid a wreath at a monument built jointly by Americans and Germans.

&#8220;The floor was filled with petroleum products. Everything was in flames,&#8221; Mohr said through a translator, tearfully recalling how he escaped that day.

Gerhard Bellosa, then 15, had been conscripted as a &#8220;flak helfer,&#8221; one of about 2,500 German students ordered to man anti-aircraft batteries around Schweinfurt. The city&#8217;s status as the center of German production of frictionless ball bearings, a key component in many military vehicles, put it near the top of the Allied target list.

Two months earlier, Bellosa had been at home with his motherwhen a 500-pound American bomb had leveled their house and destroyed all their possessions. They had survived in a bunker underneath.

The family moved to a new house, and Bellosa was home again on Oct. 14. They hid in the bunker.

After leaving his base that morning in Kimbolton, England, Dahl and the pilots of 290 other B-17s had endured wave after wave of attacks from Luftwaffe fighters. The Luftwaffe fought more fiercely than anything the bomber crews had seen before.

Over Schweinfurt, even flying at 25,000 feet, the bomber crews braved what seemed like a solid wall of flak to drop their bombs. After the first bombing raid in August, the Nazis had beefed up anti-aircraft defenses around the city.

Those crews fortunate enough to have reached the target found themselves chased by fighters for hundreds of miles home, across Germany, Holland and Belgium.

The Germans shot down 60 Flying Fortresses that day, killing or capturing 639 airmen. An additional 121 had been damaged so badly they needed major repairs before they could fly again.

Dahl&#8217;s crew lucked out; it brought its aircraft home with only one bullet hole.

The bombs took a fearful toll in Schweinfurt, killing 276 Germans, mostly civilians. All five ball-bearing factories had been hit, and Allied commanders at first labeled the raid a success. Only after the war did they learn the damage to the machines producing the bearings had been limited, and production quickly bounced back. The Nazis scattered the factories around the country, so there would be no crippling blows in the future.

In the postwar years, U.S. veterans of the raid formed the Second Schweinfurt Memorial Association, which holds regular reunions. On the German side, the city&#8217;s defenders formed the Luftwaffenhelfer Der Schweinfurt Flakbatterien (Air Force Helpers of the Schweinfurt Flak-Batteries).

In 1996, the Americans contacted the Germans about a joint reunion. Together they erected the peace monument, which stands in a little downtown park, next to what was Schweinfurt&#8217;s largest air-raid shelter. Since then, the groups have met on both sides of the Atlantic.