Shelby Scott, co-president of the Neubrucke Elementary School PTA, shops for gifts for the school’s Vounteer Tea during a tent sale at Kaefers, a shop in Sorhen, Germany, known for its heavy discounts on glassware, china and home decor items. (Cheryl Boyd / Special to S&S)

Shelby Scott, co-president of the Neubrucke Elementary School PTA, shops for gifts for the school’s Vounteer Tea during a tent sale at Kaefers, a shop in Sorhen, Germany, known for its heavy discounts on glassware, china and home decor items. (Cheryl Boyd / Special to S&S) 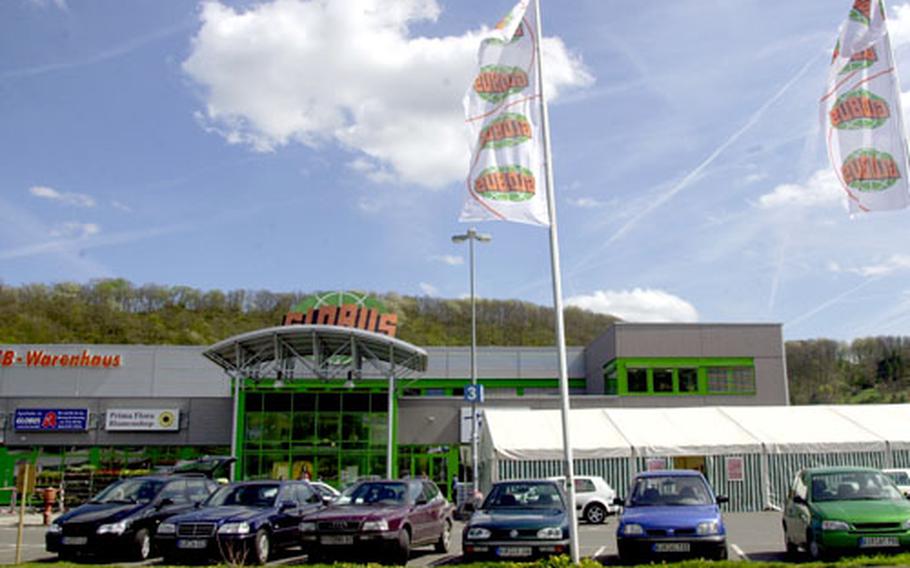 Germany’s retail sector, like that in the States, is dominated by discount chains such as Globus, which operates supermarket/department stores. (Terry Boyd / S&S)

For Britney Polk, a 1st Armored Division spouse living in Baumholder, it&#8217;s all about the thrill of the bargain hunt, enjoying life more for less money by discovering:

Where to get an Italian dinner for four adults, complete with entrees, beer and wine, for 38 euros, or about $50, less than a Pizza Hut at home. (Etna Pizza in Baumholder.)Where to get Waterford crystal stemware for less than 1.95 euro per stem, or $2.55. (Keafers, a crystal, china and home d&#233;cor discounter in Sohren, near Hahn Airport.)Where to get a pair of shorts for her daughter, Bayli, for 3 euros, less than $4. (Kik, in Birkenfeld, carries everything from bedding to clothes. Kik is &#8220;the Dollar General Store of Germany,&#8221; Polk said, referring to the Goodlettsville, Tenn.-based Dollar General Corp., a fixture in many American small towns).For Polk and other savvy shoppers, it&#8217;s about saving money and having fun. Even with a dipping dollar, Europe is still a place to find &#8220;cool things you&#8217;d never see anywhere else, and for insane prices,&#8221; from antiques to luxury items, Polk says.

Whether it&#8217;s Germany, Italy, Turkey or Britain, there&#8217;s a certain type of savvy American shopper who becomes an authority on the best each country has to offer.

For some, it&#8217;s the thrill of the hunt. For others, bargains are medicine for a sick dollar that has lost almost 8 percent of its value against the euro since January.

Still, there are economic trends in Europe working in consumers&#8217; favor, but mostly for European consumers, says George Neblett, an economics professor at the University of Maryland.

Because the European Union links 12 nations and their markets under one currency, &#8220;tariffs and surcharges have dropped like a rock among member states,&#8221; said Neblett, a long-time resident of Germany with a doctorate from the University of W&#252;rzburg. &#8220;After the initial euro shock, the system has begun to function.&#8221;

That system puts a wider variety of, say, French goods in German stores, German goods in Italian stores and so on.

Unfortunately, this is little-noticed by the American military member, who is quickly losing purchasing power due to the weakening dollar.

Shopping around for fun and profitStill, many Americans in Europe do shop on and off the economy because they say they can&#8217;t always find what they need at the post exchange, base exchange, shoppette or commissary.

Soldiers and spouses walking around the Cambrai-Fritsch Kaserne in Darmstadt gave differing accounts of how they pursue cheaper prices on the economy.

Sgt. 1st Class David Turnbow, of the 66th Military Intelligence Group, chooses his battles when it comes to shopping on the economy. Often, saving a bit of cash is a factor.

&#8220;I look at the sales in the German newspapers,&#8221; said Turnbow, a Texas native. He and his wife live off post and order baby supplies from Schlecker, a household goods, health supplies and cosmetics discount chain that provides diapers, formula and all sorts of natal needs, often at prices cheaper than on post.

Liz Bailey, who lives in Baumholder, heads downtown to the local Schlecker store for the weekly specials, especially for washing powder and bath items. Bailey rates cleaning products as better on the economy, especially soap.

German detergents are more concentrated, as well as formulated to work in &#8220;hard&#8221; local water, higher in mineral content than water from most American systems, she said.

Mervin Kemp, an information management civilian employee for V Corps, said he goes to German grocery stores and butchers because the meat and produce are better and cheaper.

Sometimes, Kemp said, he finds better deals on appliances and the like in German stores, and sometimes the deals are better on post. After 13 years in Germany, Kemp said the best thing to do is to shop around, to see if a dollar or a euro will go farther for any given purchase: &#8220;It&#8217;s kind of crap shoot.&#8221;

Trendy American clothing brands are always cheaper at the exchanges, Neblett said. If you go to a German factory outlet expecting American brand bargains comparable to the States, forget about it, he said.

At the outlet near where he lives in Sarasota, Fla., Neblett recalls seeing a Tommy Hilfiger-brand shirt for $18. That same shirt at a German outlet mall near Frankfurt? Try 136 euros, or about $178, Neblett said.

Kemp and other longtime Germany residents are happy to share other money-saving tips.

Tips from the pros can help you find the dealsYou don&#8217;t have to take a value-added tax, or VAT, form each time you shop, said Brandt Gardner, head of Baumholder&#8217;s Rod and Gun Club.

At some stores, you can save a month&#8217;s worth of receipts, take then all in at once and get a voucher for the 16-percent German tax you paid, he said.

With many soldiers deployed, bargain hunting and exploring are also great diversions. Fellow Army Family Readiness Group members and coffee-clubbers often meet on post, then caravan to different locations, Polk said. In early May, they were going to Keafers.

Each shopping trip usually yields not just bargains, but also the encouragement to do it all again, she said.