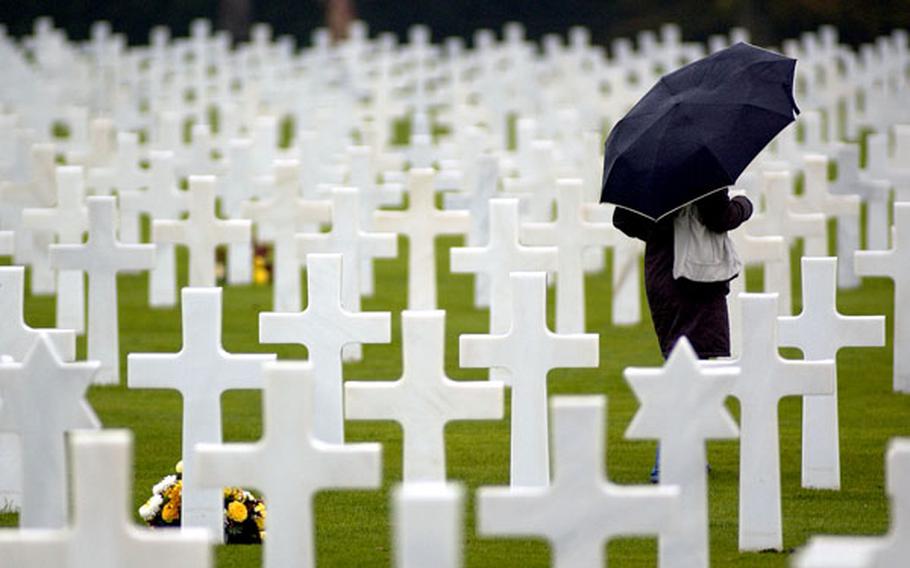 Alicia Teakell, an Army family member from Heidelberg, Germany, takes a moment to walk through the 50-acre Luxembourg American Cemetery before the beginning of a Veterans Day ceremony on Saturday. (Ben Bloker / S&S)

LUXEMBOURG CITY, Luxembourg &#8212; Retired Air Force Col. John Parker has made it a tradition to travel to the Luxembourg American Cemetery every Veterans Day for the past 20 years.

But at 83 years old, this will be the last time.

Parker, a former B-17 Liberator navigator during World War II, has comrades buried at the cemetery, home to the remains of more than 5,000 Americans who died during the war. His age and the ailing health of his wife mean he will no longer make the trip to the cemetery.

World War II veterans are dying at a rate of more than 1,000 a day, according to the Department of Veterans Affairs. And those who are still alive are finding it difficult to make it to such ceremonies, especially those held overseas, due to declining health and old age. The youngest World War II vets are more than 70 years old.

Veterans Day observances similar to the one at Luxembourg were held at American military cemeteries across Europe this weekend. Those who attended the Luxembourg one faced fog, rain and chilly morning temperatures.

Active-duty servicemembers made up the majority of those present to honor past and present military veterans. Nearly 100 airmen came from Spangdahlem Air Base, which is about a one-hour drive away.

The bulk of the airmen were represented in a formation in front of the cemetery&#8217;s tall, columned stone chapel. Most of those who came volunteered, said Capt. Patrick Parsons, a dentist with the 52nd Dental Squadron at Spangdahlem, Germany.

The ceremony included speeches, a reading of President Bush&#8217;s Veterans Day proclamation, and the playing of taps by two buglers from the Luxembourg army and a three-volley salute by an Air Force firing party. A pair of Marines laid a wreath inside the chapel.

Airman 1st Class Jean LaBarre signed up to help drive the airmen from Spangdahlem just so he would have an opportunity to visit the site.

The cemetery, which is three miles outside the city, is the final resting place for 5,076 U.S. troops killed in World War II. Most of the fallen fought in the Battle of the Bulge. Gen. George S. Patton, whose Third Army liberated Luxembourg, is buried there.

The cemetery is a special place for Parker, who flew combat missions from a base in England during the war.

He joined the military the day after Japan attacked Pearl Harbor on Dec. 7, 1941. He was a 19-year-old college student at Kansas State University before he signed up and later went to flight training.