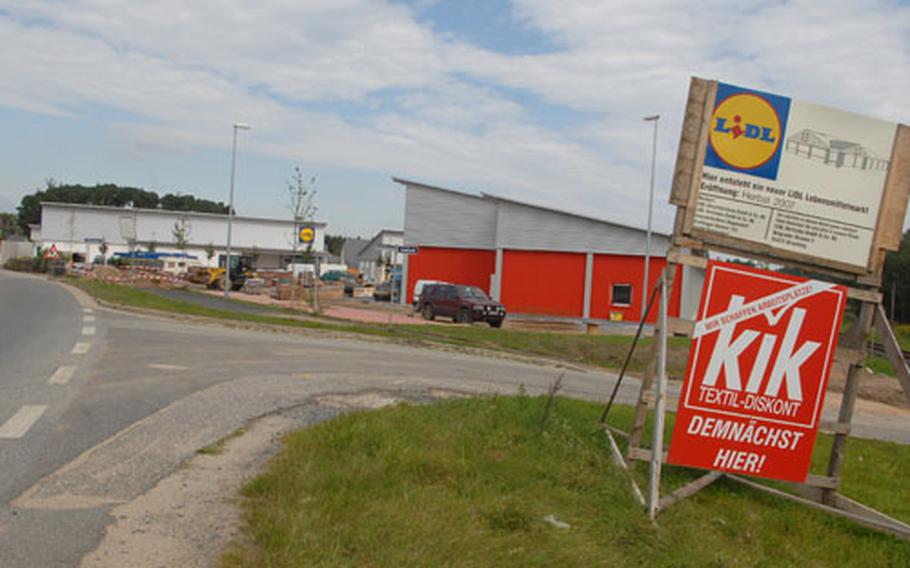 A new off-post shopping area with more than 30,000 square feet of space is scheduled to open in Grafenwöhr in October. Construction cost about $3.3 million. (Seth Robson / S&S)

GRAFENW&#214;HR, Germany &#8212; Local businesses are stepping up efforts to attract Americans to their doors with plans for a new off-post shopping area, creation of housing areas and the redevelopment of streets and public squares outside the entrance to Grafenw&#246;hr Training Area.

Grafenw&#246;hr&#8217;s mayor, Helmuth Wachter, said Thursday that a new off-post shopping center with more than 30,000 square feet of space will open in October. Construction cost an estimated $3.3 million. Wachter said he hopes the facility will attract business from some of the thousands of U.S. soldiers and families the Army plans to move to Grafenw&#246;hr in the next few years.

The off-post mall will include a Lidl supermarket; Bauer bakery; KiK, a low-cost clothing shop; Rossmann drugstore; a drive-through Burger Superstar restaurant; and a 1 Euro shop.

This month, the Army and Air Force Exchange Service is opening a $38 million post exchange/commissary on post at Grafenw&#246;hr.

Still, Tereyna McLeod, a civilian working for the Joint Multinational Training Command at Grafenw&#246;hr, said she expects to shop at the new mall.

In Ochsenhut, a growing suburb of Grafenw&#246;hr, the city and developers recently opened a block of land with 62 sections available for people who want to build houses. Many of the people building in the housing area are U.S. civilians, Wachter said.

The economic activity is creating jobs for Germans in Grafenw&#246;hr, which has an unemployment rate of just 5 percent, less than half the rate recorded in the nearest large town, Weiden, where it is 11.8 percent, he said.

Wachter said construction cannot start at H&#252;tten until the city has approved a zoning plan submitted by the investor and the plan has been released for public input for six months.

Army officials estimate that 1,600 new off-post homes will be needed to cope with the influx of soldiers to the training area.

The city also is planning $4.2 million to redevelop streets close to the training area&#8217;s Gate 1, where there are many bars and restaurants popular with soldiers, he said.

Plans for the area were developed through an architectural competition. The winning design involves a new square in front of the Stadthalle, or city hall &#8212; a facility used for public events &#8212; which also includes a Mexican restaurant popular with Americans, he said.

Several streets around the city hall will become pedestrian areas with limits on vehicle traffic.