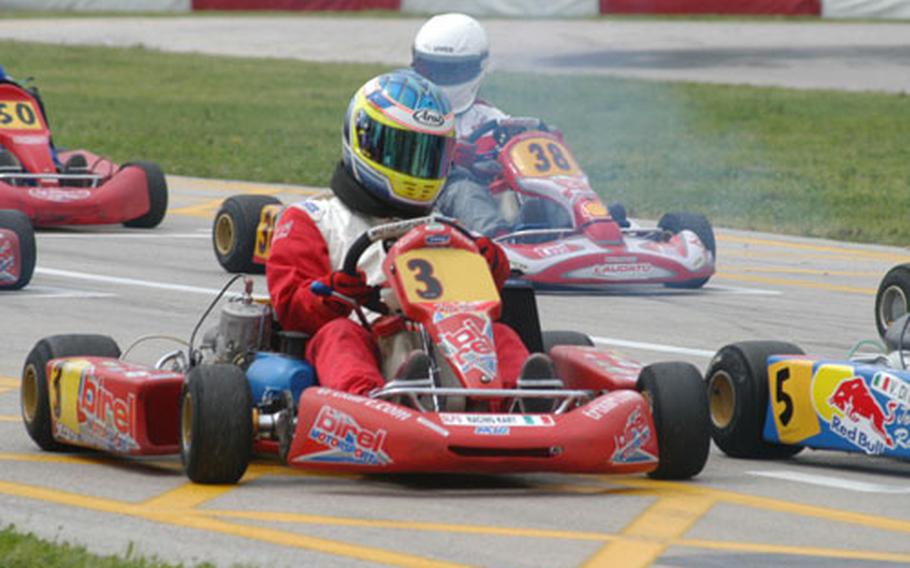 Paul Kloepping (No. 3) waits for his race to begin at a Go Kart track in Casaluce, near Naples, Italy. Kloepping regularly is the only American racer at tracks around Italy when the professionals race. (Kendra Helmer / S&S)

NAPLES, Italy &#8212; At the starting line, ready to slam the pedal to the floor, is the lone foreigner.

Just halfway into the opening lap, his point is illustrated. A driver rams Kloepping&#8217;s kart off the track. He has to push-start it to get back in the race.

Kloepping, 25, has been in about 60 Go Kart races since age 14. His father and brother raced motocross bikes.

Then in 2002, while no longer in the Navy, he moved along with his wife, Kristi, a Navy air operations secretary, to Naples. Kloepping couldn&#8217;t have gotten luckier: the city is a Go Kart mecca. He races twice a month at the more than 10 tracks within an hour&#8217;s drive. Naples hosted last year&#8217;s World Karting Championships.

Kloepping often is the sole American at tracks here. He speaks some Italian, and chatted easily with his mechanics at a Campania regional race recently in Casaluce, near the Naples Gricignano Support Site, where he works as assistant to the Teen Center director.

Before each race, he and his mechanic, Pepe Pagliuco, ensure the kart is good to go. They look at how the rubber is laid out on the track &#8212; whether it&#8217;s going to be slick or tight &#8212; and adjust the wheels accordingly. They fire up the 125 cc motor to make sure everything is running fine.

Kloepping pulls on a flash hood and helmet and sometimes a neck brace, mandatory in the States but not in Italy. Under his red-and-white suit, a vest protects his ribs from the lateral Gs he pulls on the corners. Driving shoes allow him to feel the pedals better while shifting through the six gears.

Competitors huddle around the race director, who goes through the drill: No bumping, and make it a clean start. Races last up to 20 minutes, depending on the laps and track length.

This isn&#8217;t your local Go Kart track, where 5-horsepower karts poke along at 30 mph. Pro 45-horsepower Go Karts top out at 125 mph. Karters have been seriously injured and even killed.

As the race starts, the smell of burnt rubber is in the air. Shortly afterward Kloepping&#8217;s kart gets smacked and he has to restart it so he can finish the race.

Then the fun begins. Despite the rough start, Kloepping is told he qualifies for the final race.

Then he&#8217;s told he&#8217;s disqualified because he tapped another driver&#8217;s kart during the race. He and his mechanic put up a fight, and it appears he will get to race. But the argument drags on.

In one race, he said two men who collided jumped out of the karts, helmets still on, and started boxing.

In the end, Kloepping is disqualified. He isn&#8217;t happy &#8212; despite getting a hug from the apologetic driver who rammed him.

Next month, the Kloeppings move to the States, where Paul will race in the Stars of Karting in July. Top drivers win $20,000-$25,000 to put toward Formula car racing careers, a dream of his.

He hopes to pass on to his daughter the same passion for racing he got from his dad. But while his wife says her husband&#8217;s racing is &#8220;awesome,&#8221; 2-year-old Michaella isn&#8217;t destined for zipping around corners at breakneck speeds.