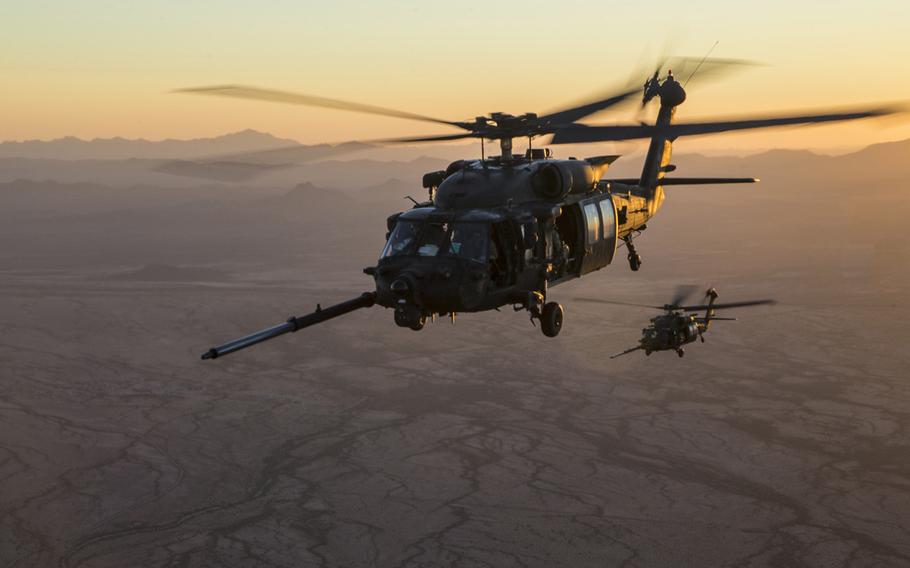 A pair of U.S. Army MH-60M Blackhawks prepare to conduct an aerial refueling exercise over Yuma, Ariz., Oct. 6, 2017. A coalition servicemember was killed and several were wounded after a helicopter crashed in Iraq late Sunday, military officials said. According to Newsweek, it was a MH-60 Black Hawk. (Allison Lotz/U.S. Marine Corps)

An American servicemember was killed and several other troops were injured late Sunday in Iraq when their helicopter crashed after participating in a raid against an Islamic State target, military officials said Monday.

There are no indications that the helicopter was downed by enemy fire, said Army Col. Rob Manning, a Pentagon spokesman. All personnel who were aboard the aircraft were quickly recovered after the crash, and the Operation Inherent Resolve coalition has launched an investigation into the incident, he said.

Three servicemembers were evacuated for additional medical treatment, Manning said. It was not immediately clear whether the injured troops were also American, as Manning declined further comment on the crash before the dead servicemember's name is released after the next-of-kin notification process is completed.

Manning and other Pentagon officials on Monday declined to identify where in Iraq the crash occurred or the location of the mission. U.S. and coalition forces are primarily fighting ISIS in its last strongholds in eastern Syria’s Middle Euphrates River Valley, but they also target remaining ISIS terrorist cells in other parts of Syria and Iraq. The coalition partners with Iraqi security forces for operations in Iraq and with Syrian Democratic Forces to fight ISIS in eastern Syria.

Earlier Monday, Newsweek reported there were 10 troops aboard the aircraft.

Special Operations Command referred inquiries about the crash to Operation Inherent Resolve, the military campaign against ISIS. Officials for the international alliance and at the Pentagon would not confirm details about the nationality, unit or type of helicopter involved in the crash.

The death brings the number of U.S. troops who have died in Iraq and Syria this year to 11 — eight of which were the result of helicopter crashes. It was the second fatal helicopter crash in Iraq this year alone, following the March downing of an Air Force HH-60 Pave Hawk in western Anbar province, when seven servicemembers died after it struck a power line.

A rash of deadly aviation incidents this year, including crashes during training outside of combat zones, has raised concern of a military readiness crisis, which some officials contend has been brought on by years of continuous combat operations, aging equipment and deferred modernization efforts.

Army Col. Sean Ryan, a coalition spokesman, stated on Twitter that the crash “further demonstrates the sacrifices of #Coalition servicemembers & the danger they face every day.”

In recent days, the U.S.-led coalition began its third phase of Operation Round Up, a mission to clear ISIS from the Syrian town of Hajin, which Pentagon officials have said is the terrorist group’s final stronghold.