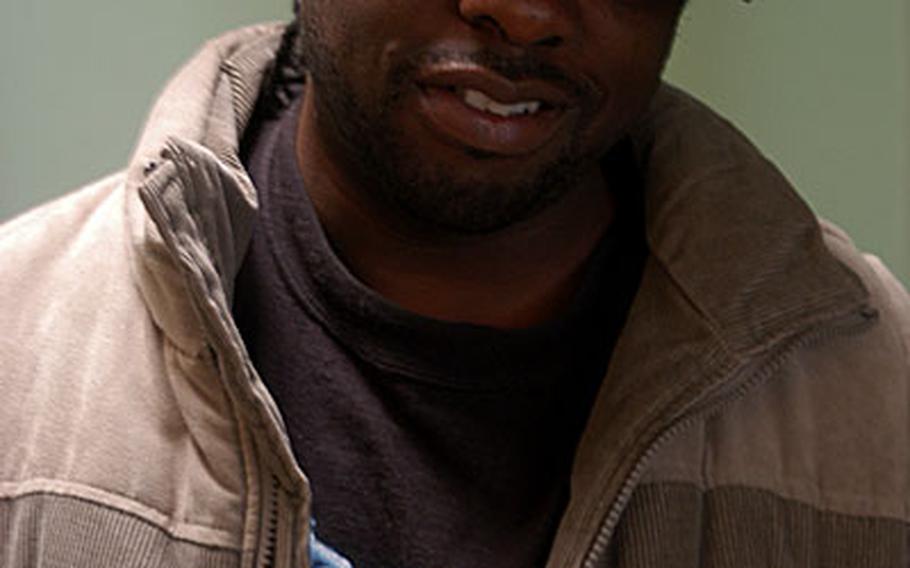 Vince Durrell, aka Vintege, just before his audition for X-Factor and the semifinals for South Coast Idol. (Ben Murray / S&S)

RAF MILDENHALL &#8212; Vince Durrell looks like a lot of the young hopefuls who compete in the &#8220;American Idol&#8221;-style contests that have become the launch pad for so many musical careers.

Well-spoken and well-dressed, he&#8217;s got the youthful optimism that drives singers to put themselves in front of picky audiences and fickle judges in the effort to kick-start a career.

Though he looks 25, at 39 Durrell, aka Vintege, has a bit more experience than some of his competitors, which may be part of the secret to his recent successes in major British musical contests.

Last week Durrell, the younger brother of a retired Air Force member who lives in the Mildenhall area, competed in the semifinal round of the regional, untelevised competition &#8220;Live and Unsigned South Coast Idol&#8221; and the opening round of the show &#8220;The X Factor,&#8221; a British talent competition along the lines of &#8220;American Idol.&#8221;

By Friday, there was good news and bad news. Though he had made it through two rounds of the &#8220;South Coast Idol&#8221; contest, he failed to advance to the final round of eight singers.

On the bright side, however, he got a foot in the door with the juggernaut of televised singing contests in a successful audition for the &#8220;The X Factor.&#8221; On June 4, Durrell will go for a second audition, which, if he passes, will have him taking the shot of a lifetime in front of &#8220;celebrity judges&#8221; Simon Cowell, Sharon Osbourne and other yet-to-be-named judges, he said.

Last week&#8217;s performances certainly weren&#8217;t the first for Vintege, who moved to England from Los Angeles in November.

Vintege also does a lot of karaoke singing and has hosted karaoke nights at the Galaxy Club on RAF Mildenhall.

But contests don&#8217;t pay the bills, and to keep cash coming in, Durrell works at a car wash near Mildenhall while he pursues his musical interests.