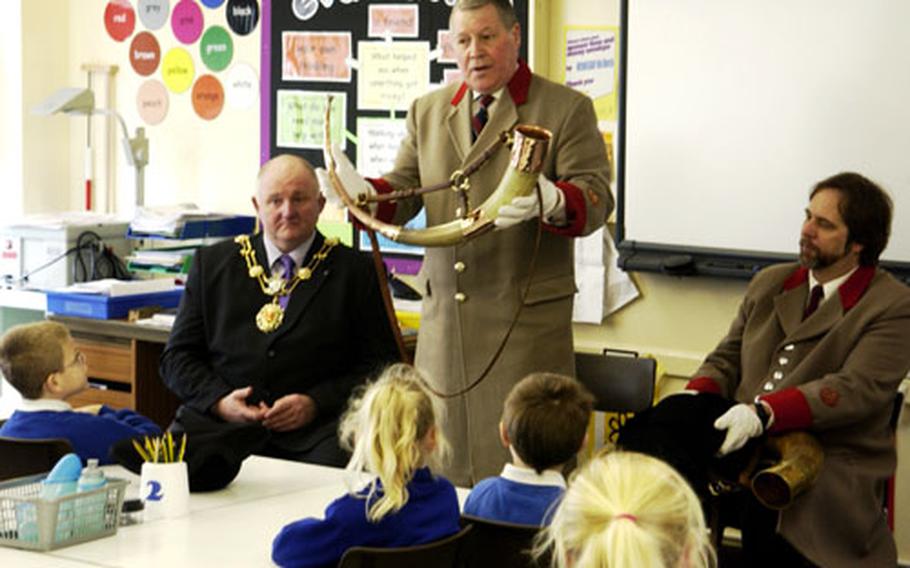 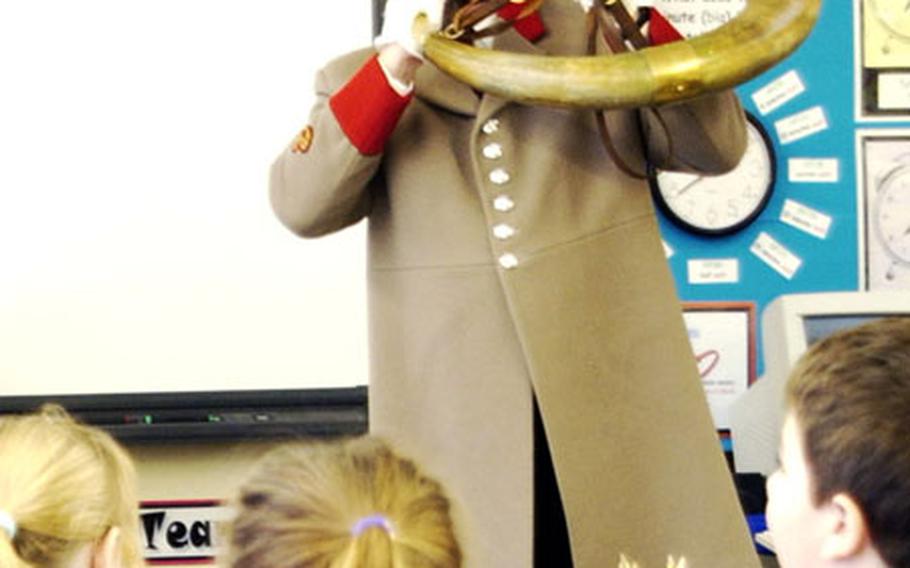 Eugene &#8220;Geno&#8221; Boarman sometimes gets curious looks when he describes the 1,100-year-old English tradition he regularly upholds in the city of Ripon, near RAF Menwith Hill.

As he stands in a heavy tan overcoat and a tri-cornered hat, a long, spiraled horn hanging from his shoulder, his description of how the town came to have a ceremonial horn blower is delivered in, of all things, a Kentucky accent.

As the deputy horn blower of Ripon (pronounced Rip-on), it&#8217;s Boarman&#8217;s task to be on call to perform the ritual of alerting the town that the ceremonial night watchman is on duty with four single-note blasts on his instrument.

It&#8217;s a custom that has taken place nightly without fail since the year 886, when Viking raiders were a threat to local villagers, according to principal horn blower George Pickles.

Back then, Pickles said, a guard patrolled the city with instructions to blow a warning on the horn if Nordic marauders appeared on the outskirts of town. The practice expanded into a paid position called the &#8220;wakeman,&#8221; who began blowing the call to signify that he was on duty each night.

The tradition continued to evolve for centuries, until just two years ago when a longtime horn blower retired and no one seemed willing to step forward to take on the job. After two months of temporary fill-ins, the local council put an ad in the paper, and Pickles and Boarman stepped forward.

Boarman, a civilian collection officer at Menwith Hill with a history of community involvement, wanted to give something back to the town, he said, though he knew very little about the tradition.

Also, neither man had ever played a horn before the summer of 2004.

Learning wasn&#8217;t easy &#8212; the Ripon horns are huge, heavy instruments made of real animal horn that are tricky to master. Boarman&#8217;s, for instance, is crafted from the sloping horn of an African ox. It was commissioned by the town in 1886.

Once the men were proficient on the horns, they began swapping turns on the ceremony. Each night, one man must walk to the market square at 9, recite the history of the tradition to any spectators, then blow the horn four times, once from each side of the market.

To be an integral part of a long British tradition is an unusual position for an American, but then again, many parts of the Ripon horn-blowing tradition are slightly peculiar.

For instance, a second part of the ritual requires the horn blower to seek out the mayor and sound three more blasts on the horn in his presence &#8212; no matter where he is at the time. If the mayor is at home, in a pub &#8212; even at church &#8212; the horn blower is obligated to march up to him, announce that he is on duty, and fire away. Once they blow the horn in the town square and seek out the mayor, their duty is done for the evening.

In addition, Pickles and Boarman are required to be present at the annual inauguration of the new mayor, a process in which the winning candidate &#8220;has to hide in the town hall&#8221; and &#8220;pretend he doesn&#8217;t want the job,&#8221; Pickles said. He is later &#8220;found&#8221; and theatrically dragged to his own induction ceremony feigning resistance, he said.

The rituals might sound eccentric, but their longevity makes them important to the character of Ripon, and they draw thousands of tourists each year, Pickles said. Having an American as one of the horn blowers has become part of the draw, he added. Occasionally, Pickles said, his pride is superficially stung when a spectator comes up to him while he is on duty and asks, &#8220;Where&#8217;s the Yank?&#8221;