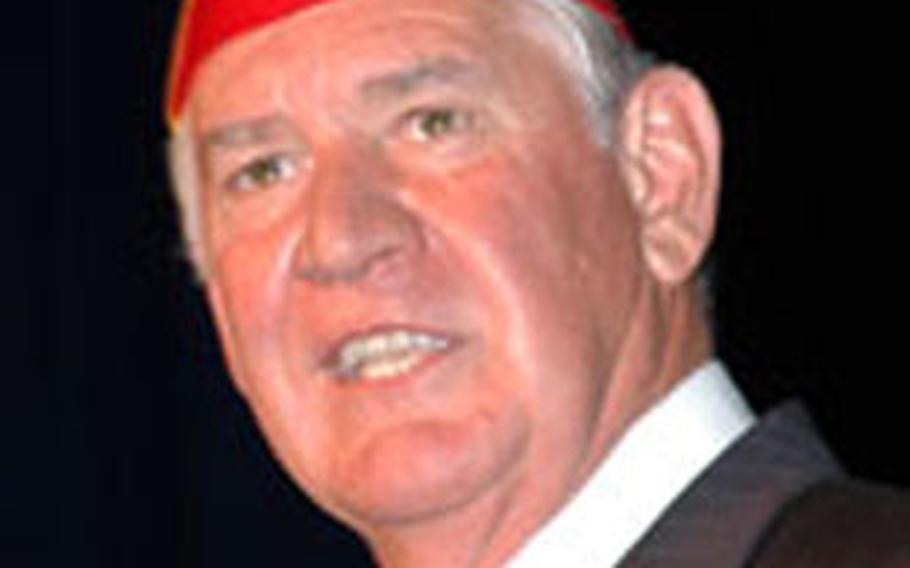 Commander Thomas Bock spoke with veterans at Okinawa&#8217;s American Legion Post 28 last week as part of a tour of military communities in Asia.

Afterward, he talked about several issues the legion is lobbying for before Congress, ranging from more funding for VA hospitals to a constitutional amendment against flag desecration.

The budget for the Department of Veterans Affairs is subject to a tough annual appropriations battle, Bock said. The Legion is pushing for &#8220;assured funding&#8221; to prop up annual budget levels, Bock said.

He cited a Maine hospital that he said had to divert funds from its construction budget to fund health-care costs as an example of the need for assured funding.

Meanwhile, the VA is increasing the health-care burden on veterans, he said. The department recently said it planned to raise prescription drug prices by $1 each month until prices double.

That difficult choice could be made easier if the administration would allow VA hospitals to accept Medicare coverage, he said, adding that the VA&#8217;s budget would increase because of the Medicare income, and veterans could fully use their retirement benefits through the VA.

Along with the health-care battles, The American Legion is doing battle against several issues promoted by the American Civil Liberties Union.

Bock says that an assault on &#8220;American values&#8221; began in 1989 when the Supreme Court invalidated flag desecration laws in most states by declaring it protected speech.

&#8220;For us, (the flag) is much more than a piece of cloth,&#8221; said Carol Van Kirk, president of the American Legion Auxiliary, a group open to female family members of servicemembers that provides help for member families with servicemembers deployed overseas. &#8220;It represents freedom all over the world.&#8221;

Both the American Legion and the auxiliary are lobbying for a constitutional amendment to allow states to pass laws against flag desecration. They also are fighting legislative and court battles to keep the Pledge of Allegiance and its &#8220;under God&#8221; wording in schools, and are opposing a movement to remove &#8220;in God we trust&#8221; from U.S. currency.