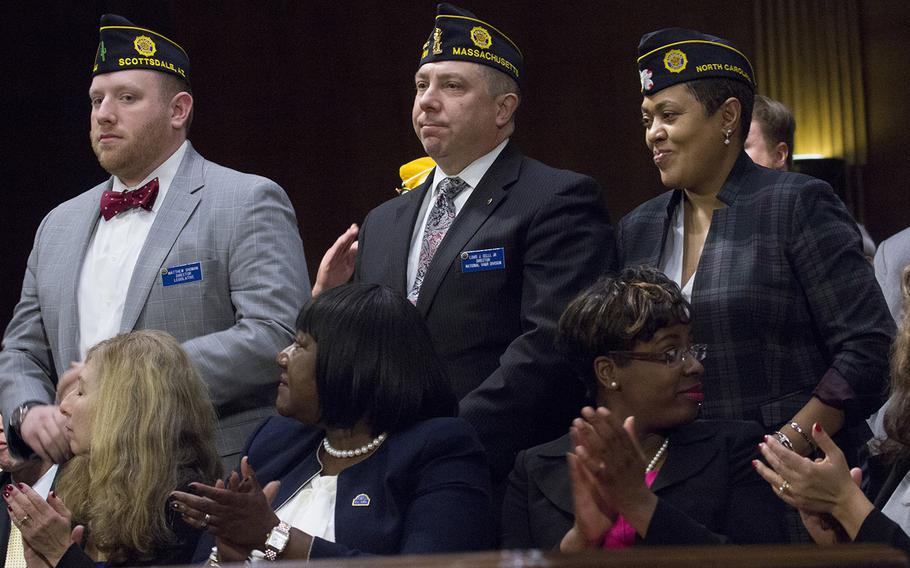 WASHINGTON — The American Legion is trying to arrange a meeting with President Donald Trump to discuss the importance of veterans service organizations, the group’s executive director said Wednesday.

“It’s important that the president meets with us, and we’re working right now to set up a meeting,” American Legion Director Verna Jones said during an event at the National Press Club in Washington, D.C. “We want to… make sure that he understands the value of [veterans service organizations], what we bring to this veteran space and what veterans need.”

The six groups attempted to obtain an in-person discussion with Trump in December before he selected a new Department of Veterans Affairs secretary, but they never had a meeting. Leaders of major veterans groups were not present when Trump held a listening session about the VA earlier this month with health care executives.

Charles Schmidt, national commander of the American Legion, said Wednesday that the group was “optimistic” that Trump would make veterans issues a priority.

“I think the president, when he was a candidate, showed some compassion toward veterans,” Schmidt said. “With a new administration, when a torch of that magnitude is passed, there is always a mix of optimism and concern.”

Though the American Legion hasn’t gained a meeting with Trump, Schmidt said he will sit down with new VA Secretary David Shulkin on Thursday. The Senate unanimously confirmed Shulkin as VA secretary on Feb. 13.

The topic that Schmidt wants to hear most about from Shulkin is the Veterans Choice Program, which was created in 2014 and allows veterans to receive care in the private sector if they cannot get an appointment at a VA facility or live too far from one.

Shulkin has said he wants to allow veterans to have a choice but alter how the program works. Some veterans have criticized the program for being complex and confusing.

Shulkin has also backed off claims that the VA would privatize.

“We want him to reassure us that privatization is not on his radar,” Schmidt said. “If you start going way far over into the private sector, what does that do to the rest of the VA and those veterans who are still in the system? The VA knows just how to take care of veterans.”

At the National Press Club on Wednesday, Schmidt also described other priorities for the American Legion, including a push for Congress to streamline how veterans appeal their claims for disability and pension compensation. The House passed a measure last year to modernize the process, but it was never taken up by the Senate.

The group is also in support of measures to hold accountable poor-performing VA executives and extend health coverage for more veterans exposed to Agent Orange.

Schmidt also voiced the group’s support of marijuana as a treatment for veteran-related conditions such as traumatic brain injury and post-traumatic stress disorder. Last year, the American Legion called on Congress to remove marijuana from the list of Schedule I controlled substances, which are designated as having no medical use.

The American Legion is also pushing for an amendment to the Constitution to prohibit desecration of the American flag. The Supreme Court has ruled desecration of a flag is symbolic speech and protected under the First Amendment.

Schmidt will testify about his organization’s priorities before the House and Senate veterans’ affairs committees next week, along with leaders of other major veterans groups.