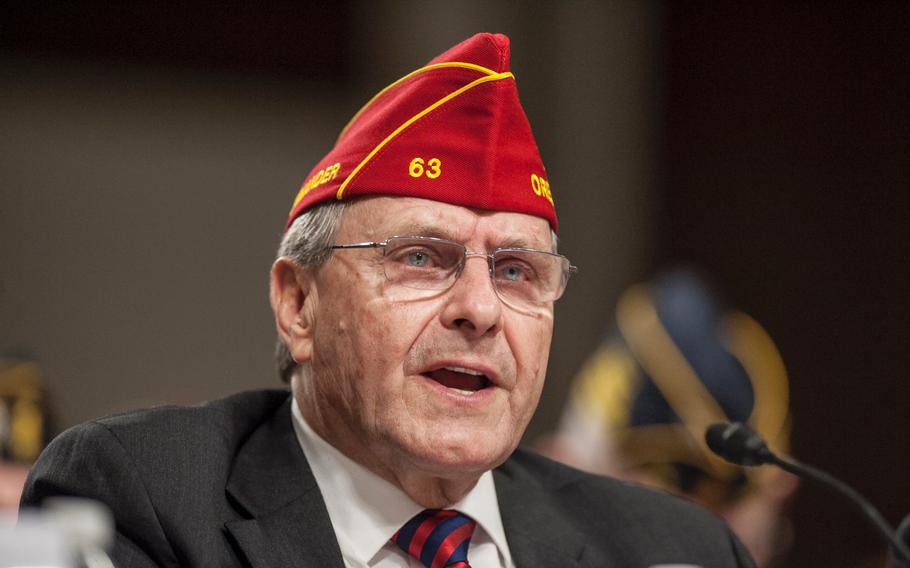 Buy Photo
American Legion National Commander Charles Schmidt addresses members of Congress on Capitol Hill on March 1, 2017. Speaking of provisions in the recent 2018 budget proposal that pertains to VA health services, Schmidt on Friday, May 26, said “it is a ‘stealth’ privatization attempt, which the American Legion fully opposes.” (Carlos Bongioanni/Stars and Stripes)

The country’s largest veterans service organization said Friday that it was “extremely disappointed” with President Donald Trump’s budget proposal for the Department of Veterans Affairs, which includes cuts to benefits for some of the country’s most disabled veterans.

Trump proposed trimming $3.2 billion in fiscal 2018 from one benefit program and saving another $20 million by reinstating a practice of rounding down veterans’ annual cost-of-living adjustments. The savings from both would be used to expand VA services into the private sector through a new version of the Veterans Choice Program, according to budget documents.

But some members of the American Legion said the proposal was a “cannibalization” of VA services and an attempt at “stealth privatization” of the department. The legion, along with other major veterans organizations, had previously warned against sending too many veterans into private-sector health care, at the risk of eroding VA resources.

“It is a ‘stealth’ privatization attempt, which the American Legion fully opposes,” American Legion National Commander Charles Schmidt said in a statement. “Choice should not be advanced to the detriment of cost-of-living increases for veterans.”

VA Secretary David Shulkin promised at his confirmation hearing in February that “the [VA] will not be privatized under my watch.”

He’s reiterated that position to lawmakers and veterans many times since, and he did so again Wednesday while discussing the budget before the House Committee on Veterans’ Affairs.

Shulkin’s stance on privatization prompted many veterans to rally behind him during his appointment process and the Senate voted unanimously to confirm him.

On Wednesday, Shulkin defended the budget proposal, stating the Choice program needs funding to meet demand. When it was created as a temporary measure in 2014, the program was injected with $10 billion. About $1 billion remains and Trump signed a bill last month to extend the program. Shulkin said he is working on an improved version of the Choice program that will be unveiled in the next couple of weeks.

The proposed increase to the Choice program would come at a cost to the VA’s Individual Unemployability benefit.

Veterans eligible now for the Individual Unemployability benefit have a 60 to 100 percent disability rating through the VA and are unable to secure a job because of their disability. It allows them to receive the highest compensation rate. For 2017, the monthly rate for a veteran living alone is $2,915.

The Trump budget proposes to remove veterans from the benefit once he or she reaches the minimum age for Social Security, if they’re eligible for Social Security payments. Veterans who have already reached that age and receive Social Security would be removed immediately and have their payments decreased. For a 60 percent disabled veteran living alone, their monthly payments could be reduced to $1,062.

Veterans of Foreign Wars, Vietnam Veterans of America and AMVETS criticized the idea earlier this week. On Thursday, AMVETS drafted a letter that the group is encouraging people to sign and send to their congressmen. It describes the proposal as “cruel.”

“We won’t be sitting back, watching to see if Congress entertains this terrible idea,” said Joe Chenelly, the group’s executive director.

The American Legion on Friday also asked veterans, their families and supporters to call their elected officials.

Shulkin defended the proposal Wednesday. He said it would make the program “more responsible” and pressed the need to find savings.

The total proposed budget for the VA exceeds $186 billion, a nearly 6 percent increase from fiscal 2017. If approved, it would be another in a succession of increases for the agency, which had a total budget of $90 billion in 2009.