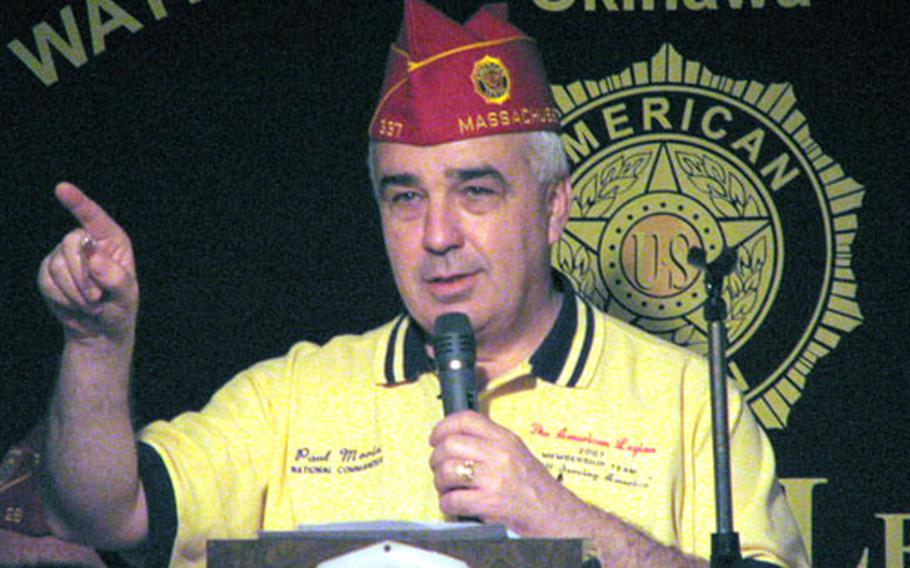 The American Legion has the clout to make it happen, said Morin, who has met with President Bush and Pentagon officials since his election to the post in August.

&#8220;Those are the kinds of doors this organization opens,&#8221; Morin told the 40 people attending the meeting. &#8220;In those talks, we touched on some of the issues for the Veterans Administration that we have been fighting for.&#8221;

Chief among the issues is making sure the government adequately funds the VA, he said.

&#8220;Veterans are being denied access to VA facilities for want of adequate funding,&#8221; he said.

In testimony before the Senate&#8217;s Veterans Affairs Committee, Morin said care is based on a &#8220;priority&#8221; basis, with some low-priority veterans being denied treatment.

&#8220;While every veteran of Operation Enduring Freedom and Operation Iraqi Freedom is guaranteed two years of VA health care at no cost, after those two years each new veteran will be assigned a priority group,&#8221; he told the committee. &#8220;There must be a more effective means of saving money than by locking veterans out of the very health-care system created for their unique needs.&#8221;

Morin said Wednesday the Legion is pushing for a $2 billion budget for the VA.

And he said the current Montgomery GI Bill needs to be improved.

He said the American Legion was instrumental in passing the original GI Bill in 1944. More than 7.8 million veterans took advantage of the educational benefits following World War II.

But the Montgomery GI Bill is vastly different, he said. For example, new recruits must set aside $1,200 of their first year&#8217;s pay to guarantee eligibility, and the maximum amount they receive for full-time college attendance has not kept up with the increasing cost of education, Morin said.

The American Legion contends the Montgomery GI Bill needs to be changed so the entitlement amount is indexed to the average cost of education &#8212; including tuition, fees, textbooks and other supplies &#8212; at a public college, university or trade school.

And it should be adjusted annually, he said.

Following his talk, Morin swore in four new members of Post 28. On Thursday, he was scheduled to have a turkey dinner with servicemembers on Kadena Air Base.