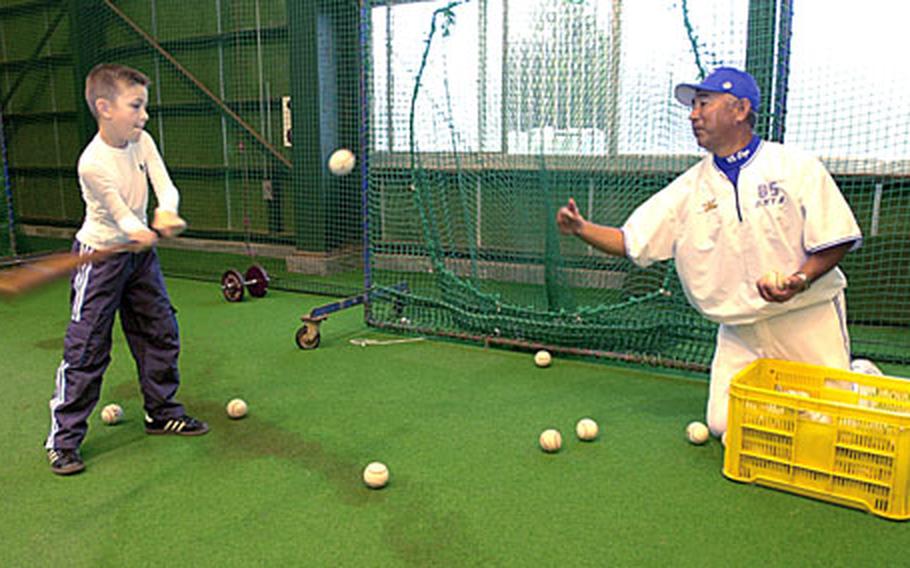 Samuel Kieffer, 8, swings at a toss Saturday from Akihiko Oya, manager for the Japanese baseball team the Yokohama Bay Stars, at Seaside Park in Ginowan City, Okinawa. Samuel said he missed the first few tosses because “I just wasn’t ready to hit.” About a dozen American kids got to meet the manager, coaches and players during one of the team’s practice sessions. (Cindy Fisher / S&S)

GINOWAN CITY, Okinawa &#8212; About a dozen American kids went out to the ballgame on Saturday &#8212; Japanese style.

The children and teens met and played a little catch with the players, coaches and manager of the Yokohama Bay Stars, a professional Japanese baseball team, at the Seaside Park in Ginowan City.

The team, here for its fall camp, signed baseballs and T-shirts and got in a little practice time with the kids.

Larry Mercier, 7, whose favorite part of the game is hitting and running the bases, got some one-on-one batting time with the team&#8217;s manager, Akihiko Oya.

Darneisha Bartie, 16, a catcher for the Dragons, the Kubasaki High School softball team, agreed it was a very good experience.

The Bay Stars are scheduled to leave Okinawa soon but will return around February for spring training, when the team plans to have another &#8220;practice session&#8221; with American and Okinawan children.

For more about the Yokohama Bay Stars schedule, visit http://www.baystars.co.jp/