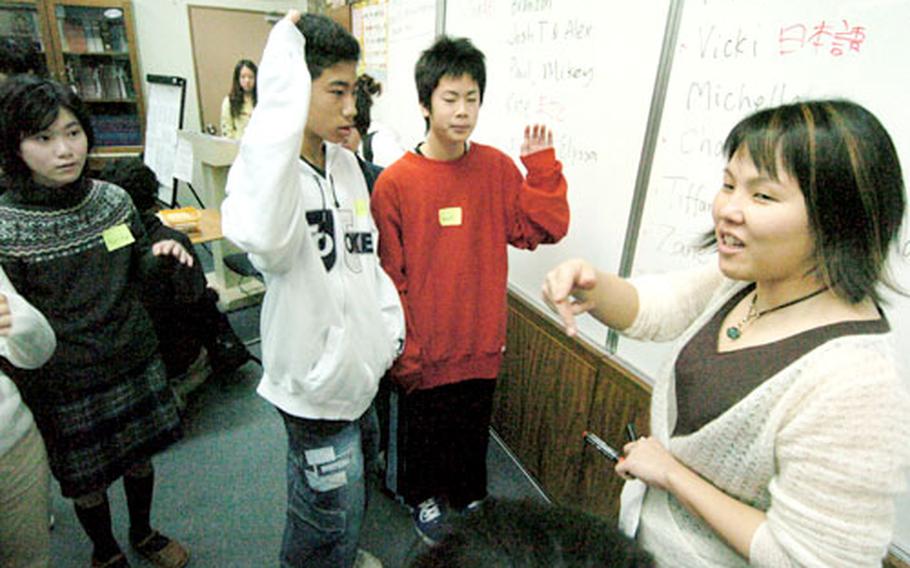 Buy Photo
Japanese language teacher Akiko Miura works with Japanese students to choose what class they would like to attend with the students at Zama American High School. The annual event lets Japanese students experience the differences in the two school systems. (Jim Schulz/Stars and Stripes)

CAMP ZAMA, Japan &#8212; They were bashful and talked about the things teens love, mostly sports and music. Whatever language they spoke, some things were the same.

The students began with a short introductory period and then joined the Americans for lunch in either the school cafeteria or the food court. They ended by joining the American students for a class.

&#8220;We try to get a cross-cultural experience,&#8221; said Akiko Miura, host-nation teacher at Zama, who organized the event with friend and Aletheia Shonan teacher Ayumi Usui. The Japanese school&#8217;s students had visited Yokosuka Naval Base in the past, but that program was canceled after the Sept. 11, 2001, terror attacks.

Aletheia Shonan student Akio Mutaguchi, 15, said he was nervous when he had to introduce himself to the group at the beginning of the day. &#8220;I couldn&#8217;t speak very well,&#8221; he said in Japanese.

To prepare for the visit, the Japanese students learned about the history of the U.S. bases in Japan.

&#8220;We told the students that they are going to visit America in Japan,&#8221; said Aletheia Shonan teacher Naoko Shiori.

Students on both sides said they learned a lot about their counterparts.

Yukako Ueda, 15, had never met Americans her age. She was surprised to see American students driving when they took her around the base.

He visited a home economics class and tried ice cream.

The Zama students also gave their visitors goodies such as chocolate-chip cookies and popsicles.

The exchange, he said, offers a chance to learn about Japanese students and &#8220;to make a few more friends.&#8221;