American-Japanese couple juggles marriage with service to their respective nations 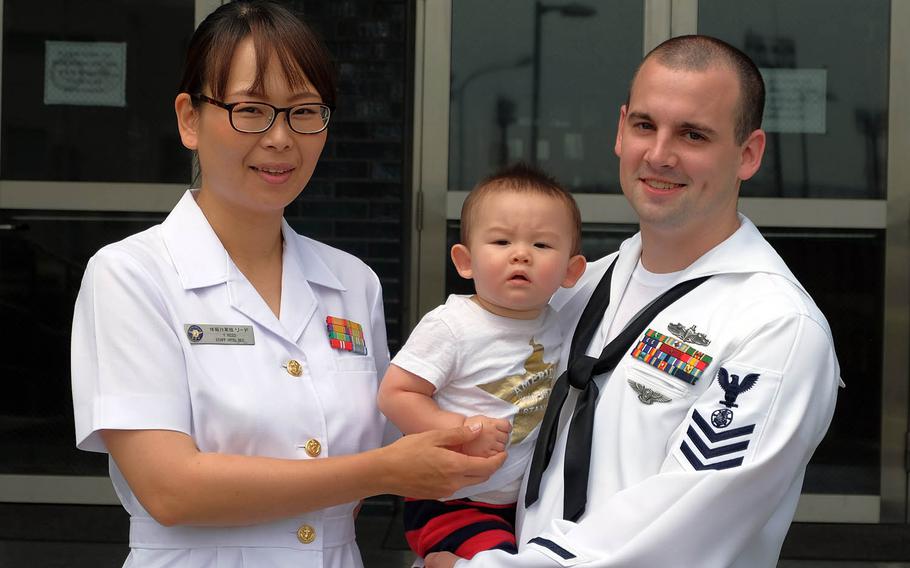 Brandon and Yuriko Reed pose with their 9-month-old son, Lucas, last month at Yokosuka Naval Base, Japan. Brandon is a Navy religious program specialist, while Yuriko is an intelligence specialist serving in the Japan Maritime Self-Defense Force. (Tyler Hlavac/Stars and Stripes)

YOKOSUKA NAVAL BASE, Japan — While it’s not unusual to see American servicemembers with Japanese spouses in Japan, couples like Brandon and Yuriko Reed are a lot less common.

The Reeds, who wed in 2012 and have two children, met while both were stationed at Marine Corps Air Station Iwakuni. It was Brandon’s first duty station and Yuriko’s second, after a stint as a trumpet player at a Japanese base near Hiroshima.

The couple met through mutual friends after Yuriko sought an American who could help her practice English.

“Everyone wants this crazy story,” Brandon said. “But that’s really all there is. Nothing spectacular.”

Through careful coordination with their respective services, the Reeds managed to secure orders for both to be stationed at Yokosuka. Brandon said he and Yuriko are lucky that his job allows him to be stationed at any major Navy or Marine Corps base. Because the JMSDF has no permanent installations outside of Japan, Yuriko is generally limited to just a handful of U.S. and Japanese bases in Japan. The Reeds say the two sea services have a lot in common and share similar structures, despite the Japanese constitution forbidding the JMSDF from operating as a full-fledged navy. Both services have similar ranking systems and ship-life cultures, although Brandon said the food is quite different on Japanese vessels.

“I’ve been to the Japanese galley and I was blown away,” he said. “I go from eating meatloaf to pasta, and they have curry, udon — yeah, their food is better.”

The Reeds say they’ve also observed some key cultural differences between the allies’ naval forces. While both keep some degree of social separation between the ranks, Yuriko says those rules tend to be less strict in the JMSDF, owing perhaps to the fact that Japanese culture is quite communal compared to American individualism.

“In the Navy, you can’t hang out with the officers, but in the Self-Defense Force, we go out drinking and hold welcome and farewell parties out of the workplace or even go fishing during their personal time,” she said. “They are your bosses, but they are also like colleagues.”

While the two maritime forces conduct similar training, Yuriko says the Navy differs because of its frequent deployments to conflict areas.

“We are just a self-defense force,” she said. “We defend ourselves or protect other militaries. The fighting spirit is different since [the U.S. Navy] could be sent to a warzone any time.”

Despite their cultural differences, the Reeds say sharing a military background helps their relationship.

“She understands — because she did go on a ship — that I have duty or I’m busy at work,” Brandon said. “She understands and that’s really cool. Some guys, their wife gets mad because they didn’t email or call. I’ll say sorry the email is down and she knows the ship’s internet is bad sometimes.”

Yuriko said she empathizes with her husband’s situation.

“There are times when I can’t contact him once they leave. I understand that,” she said. “Even I don’t hear from him, I don’t get frustrated. I understand the military system.”

The Reeds said they plan to stay in their respective services — and in Japan — as long as possible, and will deal with any major career changes as they come along.

“I want to stay in and retire,” Brandon said. “We’re going to see where I can get stationed first and then she is going to see if they’ll let her go there. I love it here. I’ll stay here 20 years if they let me. I love Japan.”