American in British unit fits in with air rescuers 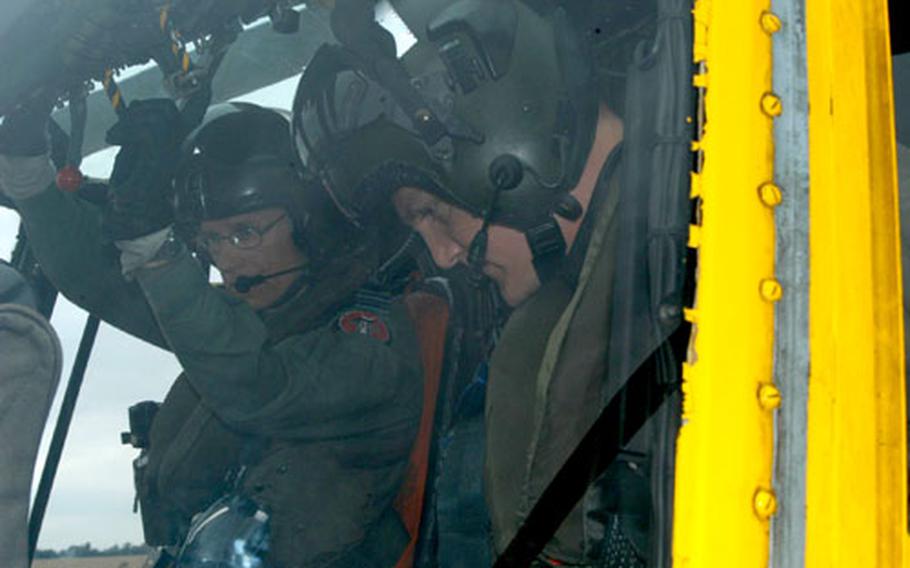 RAF WATTISHAM &#8212; A thick night&#8217;s fog shrouded a car accident scene in visionless distress. The victims looked to him for aid.

&#8220;We recovered the most-injured person and took them to the hospital for treatment.&#8221;

Not bad for an American at work overseas.

Weinert is a U.S. Coast Guard officer on an exchange program with the Royal Air Force in the United Kingdom. He serves as a helicopter pilot at this Suffolk RAF installation as part of the B Flight, 22nd Squadron search and rescue team.

The 31-year-old spent nine months training to fly the Sea King helicopter with the RAF before reporting to RAF Wattisham in November 2005.

Since then, the San Diego native has been absorbed into the crew, cooking up feasts and cheese sandwiches alike alongside search and rescue teammates during shifts that can stretch 36 hours.

He trains constantly with the crew and has participated in several life-saving missions, including pulling a man suffering from a heart attack from a ferry in the sea at night in rough weather.

&#8220;It is always most rewarding to know that you have made the difference in the positive outcome of someone&#8217;s predicament,&#8221; he said.

But it&#8217;s not all ducking power lines and navigating gale force winds for Weinert.

He and his wife live in a charming nearby typical Suffolk village and have taken well to English life.

&#8220;I love the sense of humor and the banter,&#8221; he said. &#8220;The stereotype for me was that the Yanks were crazy and the Brits were prim and proper. Having lived here the first few months, you realize it is the Brits that know how to have a good time and the Yanks that are more reserved.&#8221;

Weinert still has another 1&#189; years left to serve in the U.K. before he redeploys home to pursue his next goal of becoming an instructor pilot. But when he returns, he&#8217;ll be a more experienced pilot and a more knowledgeable officer thanks to his time with the RAF.

&#8220;The thing we as Americans need to appreciate is that the Brits often do more with less,&#8221; he said. &#8220;So even if the helicopter we fly is not the most modern one in the world, the professionalism and the competence of the personnel that fly it and maintains it is absolutely remarkable.&#8221;