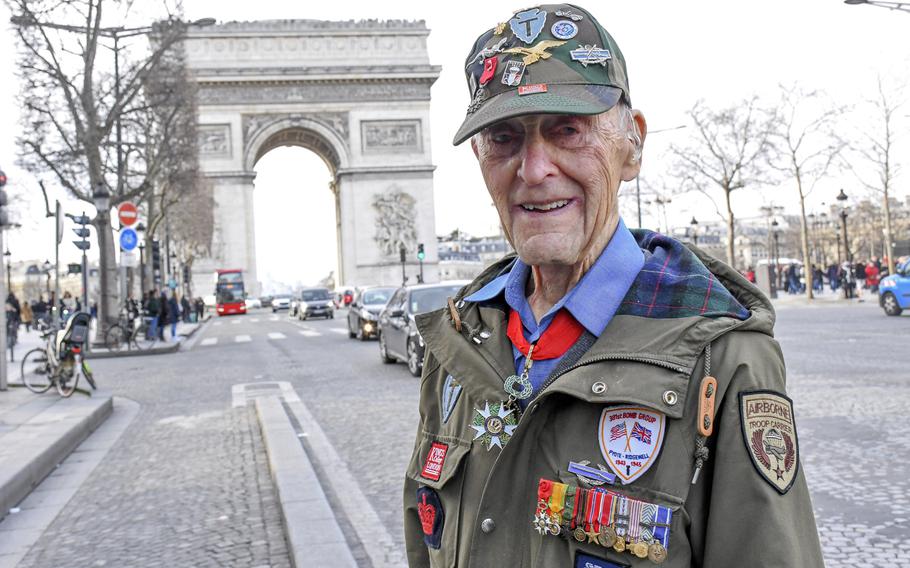 Buy Photo
Stephen J. Weiss stands near the Arc de Triomphe on Feb. 14, 2020, in Paris, where he took part in a ceremony to honor veterans of the Office of Strategic Services, a precursor to the CIA that helped liberate France during World War II. Weiss, 94, died last week in his London apartment. (Chad Garland/Stars and Stripes)

Buy Photo
Stephen J. Weiss stands near the Arc de Triomphe on Feb. 14, 2020, in Paris, where he took part in a ceremony to honor veterans of the Office of Strategic Services, a precursor to the CIA that helped liberate France during World War II. Weiss, 94, died last week in his London apartment. (Chad Garland/Stars and Stripes) 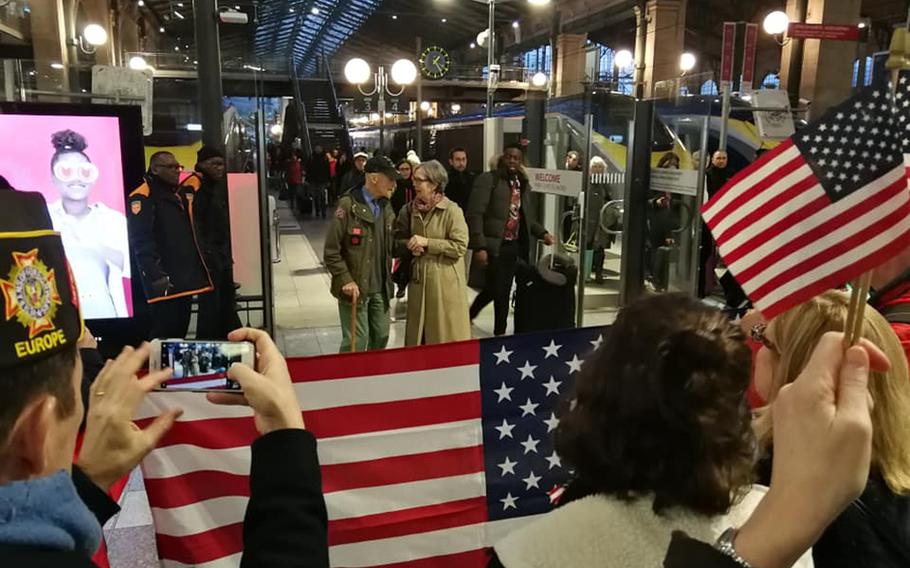 Stephen Weiss, a U.S. World War II veteran who worked with the Office of Strategic Services behind enemy lines in France in 1944, is greeted by American well-wishers at Paris Gare du Nord train station on Thursday, Feb. 13, 2020. Weiss, 94, died last week in his London apartment after returning from Paris. (Cyril Pefaure)

Stephen J. Weiss, a World War II soldier who was honored by France for his service behind enemy lines, has died. He was 94.

Earlier this month, Weiss traveled to Paris for a ceremony at the Arc de Triomphe honoring the veterans of the Office of Strategic Services, a precursor to the CIA, with which he briefly served during the war.

A commander in France’s distinguished Legion of Honor who received two Croix de Guerre, the French Resistance Medal and a U.S. Bronze Star, Weiss died last week in his London apartment after returning from the trip, his family said Monday in an email to friends.

It was “a final trip that is both iconic and poetic knowing the history of his relationship with France,” the family said in the email, which was titled “We’ll meet again,” something Weiss was fond of saying.

A lead infantry scout during the war, he began a late-in-life career as an academic, researching and lecturing on war and psychological trauma. He spoke frankly of his own struggles to overcome what is now known as post-traumatic stress disorder.

He credited treatment for “a major turnaround” in his life and wrote of his wartime experiences in a 2011 autobiography re-released last year under the title “The Invisible Scars of War.” His was also one of three stories detailed in the 2013 book “The Deserters” by Charles Glass.

Weiss saw brutal fighting in Italy with the 36th Infantry Division, then landed in southern France in August 1944 as part of an operation that originally had been planned to coincide with the D-Day landings in Normandy.

After being separated from his unit, he and other soldiers assisted the French Resistance in a campaign to disrupt German operations before being recruited to join a team of OSS commandos.

He volunteered to stay but eventually was forced to return to his infantry unit after a couple of months.

While behind German lines, he’d been reported missing in action. Two telegrams sent to notify his family must have confirmed his father’s worst fears after the younger Weiss had “blackmailed” him into signing paperwork to let him enlist at 17, he said.

“He didn’t deserve that,” Weiss said, recalling that his father, a World War I veteran who had been gassed and wounded in combat, had tried to warn his son about the death and psychological trauma of combat.

After finding one of the MIA telegrams recently, he reflected on his wartime experience in an email that his family quoted in the death announcement.

“I’m startled as to how close I came to death, to my own demise and oblivion,” Weiss wrote. “My sergeant lies dead in a foreign field for the 75 years I’ve survived, haphazardly thinking things over. His life and others like him remain heartbreakingly young forever. Cheated out of what I gained.”

After the war, he worked in music and television in Hollywood, and married accomplished ballet dancer and instructor Rosemary Valaire, with whom he had three children before their 1982 divorce. Valaire died in 1999.

Weiss earned a master’s degree in clinical psychology in the 1970s and for many years ran a therapy practice before returning to school in the 1990s to pursue a second master’s degree from King’s College London, then a doctorate, when he was in his 60s. The university named him a fellow last year.

A memorial service will be planned, the family said.

His most recent trip to France came at the invitation of Meredith Wheeler, an American living in Lautrec who has written about the instrumental role of OSS operations during WWII.

She and other American expatriates waving U.S. flags greeted a surprised Weiss at Paris Gare du Nord train station on Feb. 13 in what she described later as a “flash mob of gratitude and goodwill.”

Though he walked with a cane, he appeared to be in good health during the visit, if a little tired by the end. Upon his return to London, Weiss emailed Wheeler with his regards.

“Easy journey back and putting things in order, while recuperating, just taking it easy,” he wrote. “Look forward meeting up in France, possibly this summer.”