American ‘Halmonie’ reunited with Koreans she saved as kids 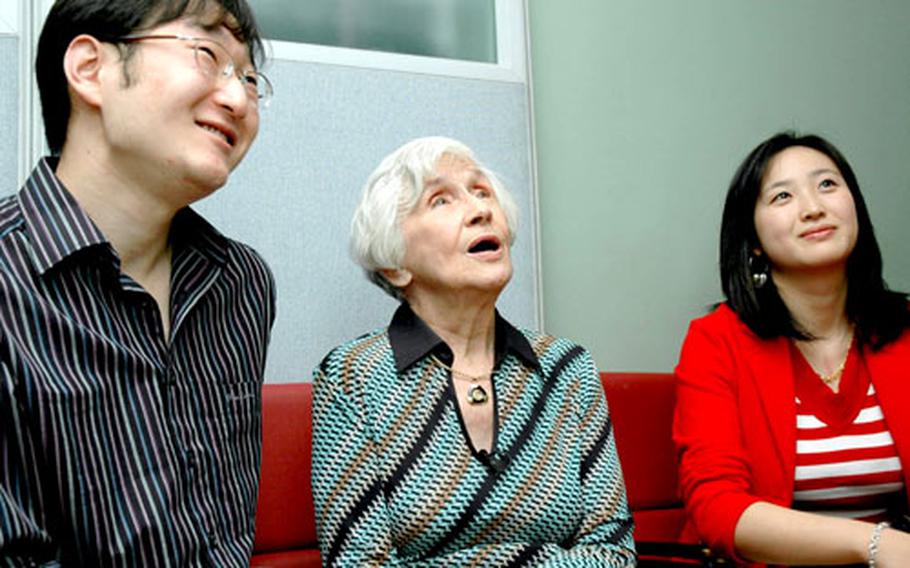 Harriet Hodges, 89, talks with some of the South Korean children — now grown with children of their own — for whom she helped get life-saviing heart surgery in the States. (Teri Weaver / S&S)

It started in the early 1970s when Hodges learned the daughter of the chef at the former golf course on Yongsan Garrison couldn&#8217;t get proper treatment here for a heart problem.

By the time she left South Korea in the mid-1990s, Hodges had convinced major air carriers to give up seats, local nurses to serve as translators and escorts, and American cardiologists to book operating rooms for free &#8212; all for South Korean children who had little access to specialized health care here.

Last week, Hodges returned to Seoul for a visit, including reunions with the families of the children she helped. Many of them now have families and children of their own. On Oct. 22, Korean families from Busan, Daegu, Incheon, Seoul and other cities gathered to honor her.

She also received an award this week from Gen. B.B. Bell, commander of U.S. Forces Korea, for her contributions during the past three decades.

Hodges, 89, now of Jacksonville, Fla., has two sons, two grandchildren and a great-grandchild of her own. Her husband, retired Army Col. Carroll Hodges, died two years ago.

He worked in South Korea from the 1970s through the mid-&#8217;90s, first with the American-Korean Foundation in Seoul and then as an international relations advisor for U.S. Forces Korea, according to the Army&#8217;s Installation Management Agency office in South Korea.

During that time, Harriet Hodges began helping South Korean children who couldn&#8217;t afford local health care and whose heart ailments went beyond the technical skills then available locally, she said.

After her success with the chef&#8217;s daughter, mothers began showing up at her house with their children. She&#8217;d get their exams and tests done at the on-base hospital, confirm free operations with doctors in the States and get them aboard Korean Air or Asiana Air carriers.

Eventually, she called her effort the International Human Assistance Program and received help from local Rotarians, the American-Korean Foundation and Ronald McDonald houses in America as well as dozens of doctors in South Korea, on Yongsan and in the States.

On Saturday, Hodges met a small group of the children &#8212; now adults &#8212; at Eulji General Hospital in Seoul. The hospital still holds a heart clinic once a month to check its former patients for any recurring problems, said Dr. Imm Chin-woo, Eulji heart institute director.

Two decades ago, South Korea had no national health-care system and heart medicine was limited, he said.