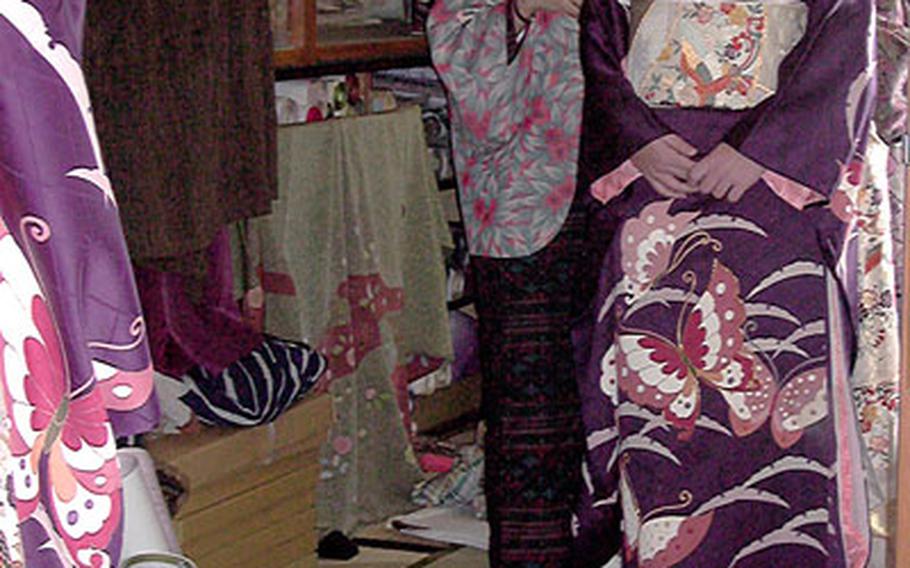 Kate Jaffer,right, checks to see how her kimono looks as a fitter makes final adujstments just before the Sasebo Coming of Age Ceremony Jan. 8. Jaffer, daughter of a Navy lieutenant commander now stationed in Okinawa, attended a Japanese junior high school in Sasebo for two yearsand was invited back to atend the ceremony. (Courtesy of the Jaffer family)

KADENA AIR BASE, Okinawa &#8212; A lot of military kids come to Japan and play it safe. They don&#8217;t wander from the American bases where English is spoken and fast food is readily available.

Not Kate, Rafia and Bo Jaffer, the children of Lt. Cmdr. Danny Jaffer and his wife, Renee. They dived in headfirst. They say that although staying afloat was at times challenging, the experience has affected all their lives.

In Kate&#8217;s case, it significantly altered her course.

A young teen who didn&#8217;t speak Japanese when her family came to Sasebo Naval Base seven years ago, she is now 20 and planning to graduate from a Japanese university. She didn&#8217;t know even basic Japanese customs in March 2000, but she has acclimated so well she was invited to take part Jan. 8 in a quintessential Japanese event: Seijinshiki, the formal coming-of-age ceremony for 20-year-olds.

An adventure beginsBefore moving to Sasebo, the parents had talked to then 13-year-old Kate, 11-year-old Rafia and 9-year-old Bo about learning a new language and exploring customs different from their own, said Danny Jaffer, now with Tactical Air Control Squadron 12, part of Fleet Activities Okinawa.

But when the family arrived at Sasebo in March 2000, the children attended Department of Defense Dependents Schools for the remainder of that school year.

Base life was not what the kids had expected.

She remembers seeing Japanese kids walking every day to a nearby public school.

So did her siblings.

Though they spoke no Japanese, Kate, Rafia and Bo asked their mother and father if they could attend local public schools.

Danny Jaffer said he initially was concerned how it would affect his kids&#8217; schooling. Then he decided that &#8220;if when they got back to American schools and they were a year behind, then it would still be worth it to us,&#8221; he said.

The parents agreed this was a once-in-a-lifetime opportunity for their children. But, they decided, the kids could do it only if they agreed to complete a full year. They stayed two.

&#8216;It was kind of scary&#8217;Before the Jaffer children could attend the local schools, Sasebo city officials had to grant them permission.

Danny remembers that the officials &#8220;thought we were crazy&#8221; because no one in the family spoke Japanese. He said the base officials seemed concerned the kids didn&#8217;t know what they were getting into.

Not knowing anyone and not speaking their language was tough, said Bo, now 16.

But as the weeks progressed, the kids found that although the language was different, many subjects were the same. Math is math, Bo said.

Bo and Rafia were in elementary school and had each other to lean on. Kate, in the eighth grade at Koukai Junior High School, was by herself &#8212; which her father said concerned him.

Besides the language barrier, the Jaffer children soon found other differences between Japanese and American schools. For example, students were responsible for school cleanliness.

Kate remembers her surprise the first time her classmates started dragging desks to the back of the classroom to start cleaning the room.

Kate, a self-admitted tomboy, also said she wasn&#8217;t used to having to wear a uniform with a skirt.

Another difference: Schools had no air-conditioning or heating.

By the end of their second school year, none of the children were fluent in Japanese. But they knew enough to get by.

The road to fluencyFive years ago, the family moved to Okinawa and the Jaffer children returned to the DODDS school system. None had to repeat a grade.

But Kate also wanted to understand Japanese friends better. So she took Japanese throughout high school.

Her mother, Renee, said that by Kate&#8217;s senior year, she was the only student in the Japanese 5 class who didn&#8217;t have a native speaker at home.

In fact, Kate became so fluent she decided to attend Meio University in Nago, where she again is one of the few non-Japanese students. She is in her sophomore year, studying management and information finances.

But the friends she made in Sasebo never forgot the American girl who joined them for a brief time.

And they asked her to join them at the Seijinshiki celebration in Sasebo. Seijinshiki, celebrated the second Monday of January, is a national holiday at which municipal governments acknowledge 20-year-olds as adults. Many of the youths dress in formal outfits or traditional kimonos.

The ceremony and seeing old friends was great, Kate said.

The Jaffer family doesn&#8217;t know where they&#8217;re going next, but they are due to rotate in September.

Kate, however, plans to remain behind and graduate from Meio. For other Americans coming to Japan, she has some simple advice if they too want to make their mark: