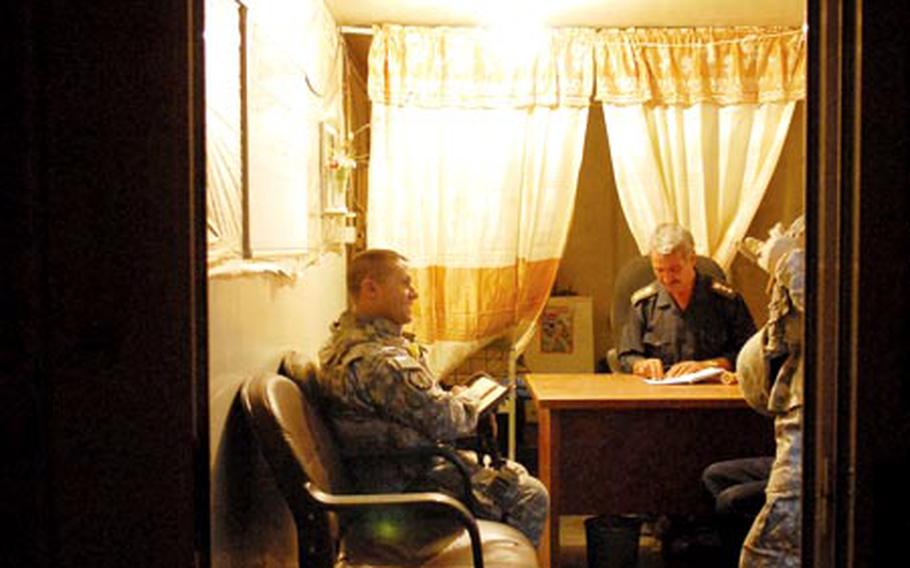 Staff Sgt. Eugene Fosmire, a squad leader in the 116th Military Police Company (left), jokes with an Iraqi Police chief while checking in on his Afghani, Iraq, station late Sunday night. The “station” is a collection of premade housing units similar to an American trailer park. (James Warden / S&S)

TAL AFAR, Iraq &#8212; Ken Wickelgren tried to soften any perceived criticism from the very first words out of his mouth.

We&#8217;re all here to learn, he told Iraqi police chiefs attending his class Monday at Forward Operating Base Sykes. I respect your experience. I&#8217;m going to learn from you, too.

"I want you to understand, by no means do I know everything," the civilian Iraqi police adviser concluded.

However, feelings were hurt as soon as Wickelgren opened with a video of a car bomb scene. The video was supposed to launch a general discussion about how to respond to a serious emergency. But Brig. Gen. Fawaz Mahmood, the Iraqi police district chief for the Tal Afar area, took it personally and began vigorously defending himself from an attack Wickelgren never made.

It was close to half an hour before Wickelgren got to his first PowerPoint slide.

In many soldiers&#8217; minds, Iraqi police sit near the bottom of the Iraqi security forces hierarchy &#8211;&#8212; just a step above members of the "Sons of Iraq," who fill in the ranks of the police in those areas that have the security volunteers. The very nature of the force creates high hurdles for the few American advisers struggling to train Iraqi police scattered across an area in northern Iraq that is the size of New Jersey.

Iraqi police are the most local of official government forces. They are drawn from the surrounding community. Many of those around Tal Afar come from mud hovels in the surrounding dirt-poor villages.

Illiteracy among the rank-and-file Iraqi police here is high, said 1st Lt. Erin Trejo, a platoon leader with the 116th Military Police Company and a police transition team adviser. Until a Tal Afar branch of the Mosul police academy was established, many police couldn&#8217;t make the trip to Mosul for fear that they&#8217;d be blown up on the way.

The car bomb video is peppered with the sound of policemen firing their guns in the air to clear the crowd. Wickelgren played an audio recording of Iraqi police at another emergency that sounded like pitched battle.

The shooting is hardly an uncommon reaction. In May, for example, American and Iraqi soldiers rushed for cover in Mosul when shooting began after a car bomb exploded during a bomb squad search &#8212; only to learn that the shooting was just Iraqi police.

The police shoot even when they&#8217;re not afraid. Mahmood told Wickelgren he planned to charge some policemen for the bullets they shot while celebrating an Iraqi soccer team victory and jail the one who used a PKC machine gun during the revelry.

The advisers started videotaping emergency scenes, in part, to head off denials about what had happened, Trejo said. That resistance forces the advisers to pick their battles before even developing a class on a problem they&#8217;ve noticed.

If they decide it is worthwhile, the advisers must pare the instruction to its most basic elements, especially for the less educated low-level police. The language barrier adds to the difficulty. In addition to the usual difficulties of translating between Arabic and English, many of the police come from the area&#8217;s Turkoman population, whose native tongue is a Turkish dialect.

After the advisers have invested all that time, the Iraqi government may suddenly decide to shift the leaders. Most of Tal Afar&#8217;s chiefs arrived here only recently because the previous chiefs were rotated out en masse.

The Tal Afar area now has just a fraction of the chiefs it once had. The empty slots are rapidly being filled. But with just over a month left in their own tour, the American soldiers have been forced to start building rapport with a whole new group of Iraqis.

Still, the new chiefs are, by and large, more experienced and better trained than those they replaced. Most of them come from bigger cities with bigger problems than the relatively stable Tal Afar area.

Back on Sykes, Wickelgren persisted through his presentation, steering the chiefs back on topic when they strayed from it, sometimes with hard words.

Toward the end, though, Mahmood had an idea of his own. Why don&#8217;t the Iraqi police gather civilians for a car bomb drill to show residents how they could help the police in an emergency? Wickelgren seized on Mahmood&#8217;s idea. It was inspired and, most importantly, the chief&#8217;s own.

Trejo was optimistic about Mahmood&#8217;s plan. He&#8217;s an experienced chief who shows promise. Still, she&#8217;s been doing this a long time and can&#8217;t help noting that previous chiefs have failed to deliver on similar ideas.