'America stands with you,' Bush tells troops during visit to Wiesbaden 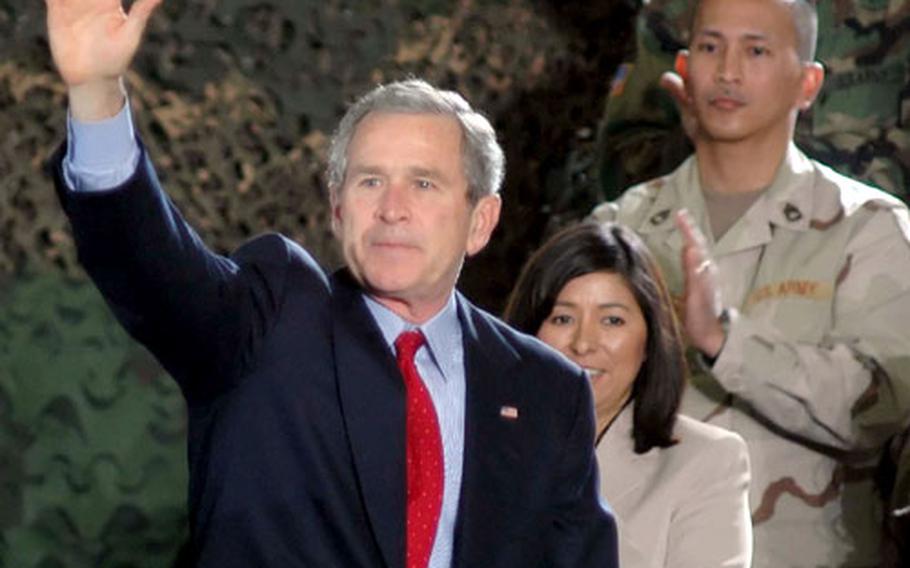 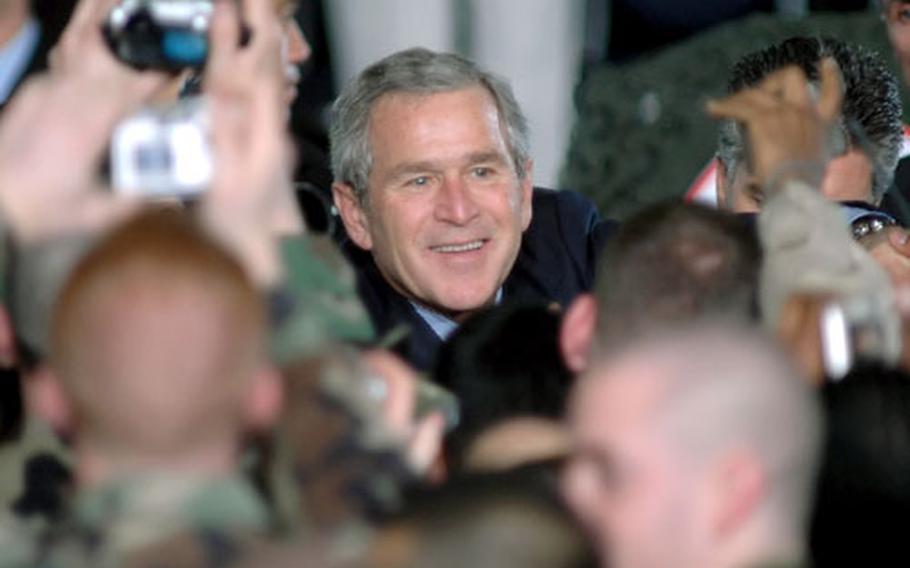 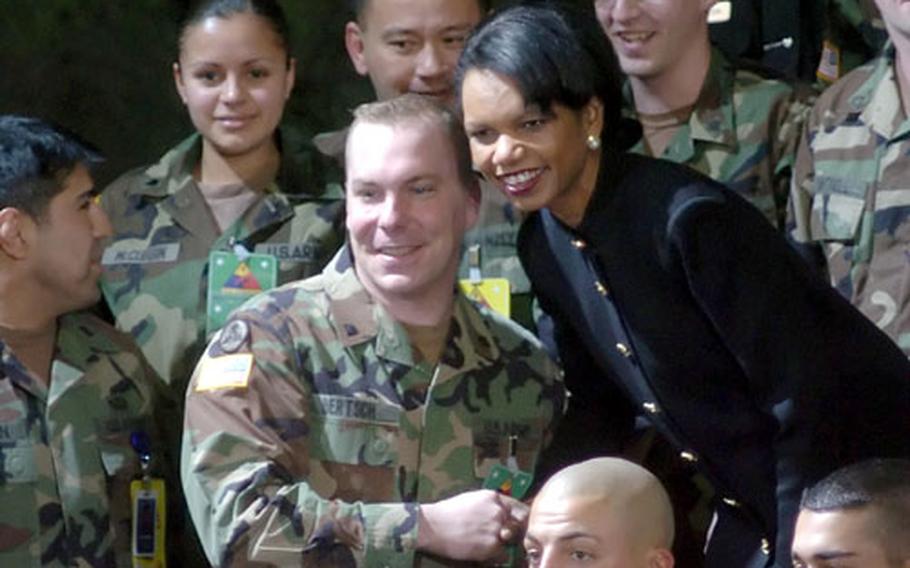 Secretary of State Condoleezza Rice poses for a photo with troops. Bush and Rice stopped in Wiesbaden as part of their European trip, during which the president is hoping to solidify ties with Western leaders, some of which were weakened by the U.S. invasion of Iraq. (Raymond T. Conway / S&S) 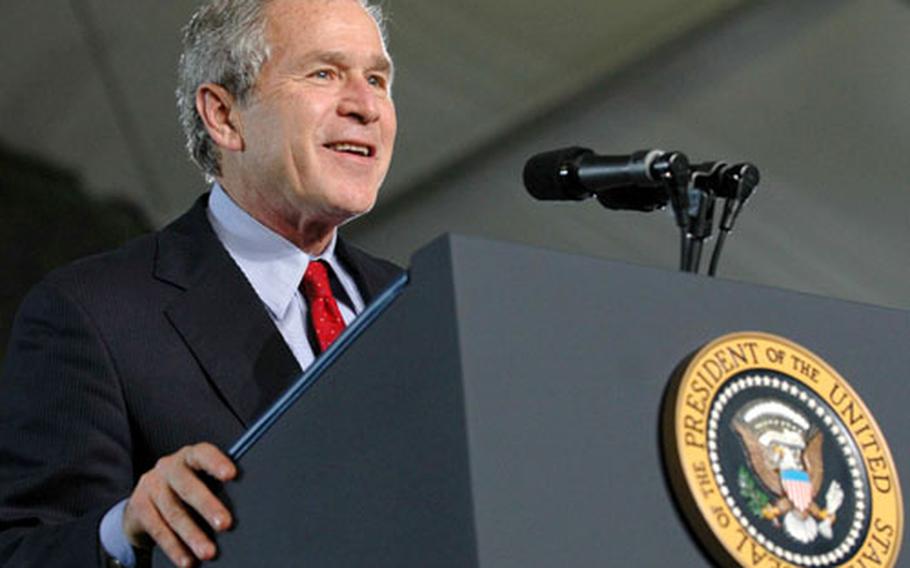 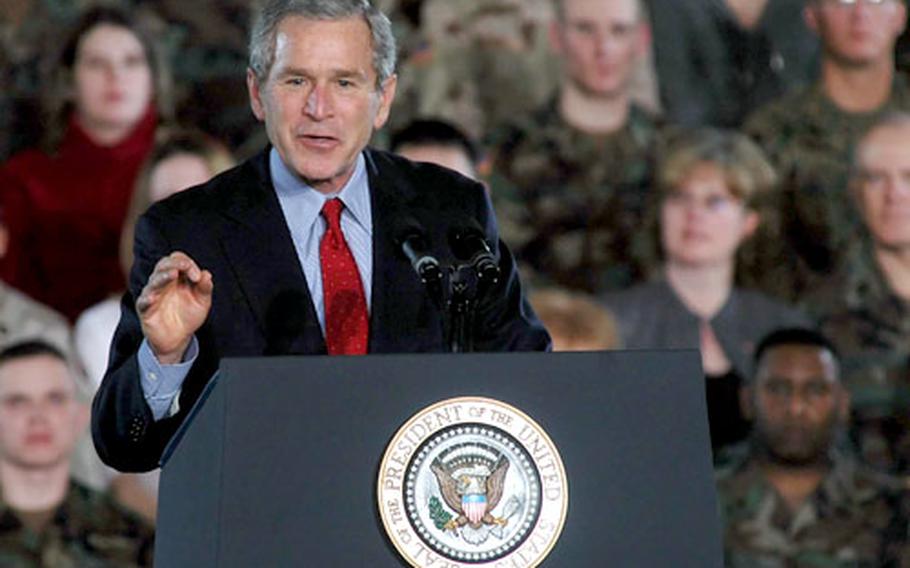 (Click here for the text of President Bush&#39;s address to servicemembers at Wiesbaden.)

WIESBADEN, Germany &#8212; President Bush praised thousands of troops and their families during a Wednesday afternoon pit stop at the Wiesbaden Army Airfield during his three-country European tour.

Before heading off to the Slovak Republic, the president and other White House officials stopped to thank war-weary troops and give them a bit of entertainment for a job well done.

&#8220;Laura and I were in the neighborhood, thought we&#8217;d drop by and say hello &#8212; howdy,&#8221; said the military&#8217;s commander in chief to cheering troops and family members. Bush had spent most of the day meeting with German Chancellor Gerhard Schroeder in Mainz.

Bush said he wanted to give the troops a taste of home after their yearlong deployment to Iraq.

&#8220;Today I bring you a message from back home: The American people are grateful to you. Your communities are proud of you. And as you defend the cause of freedom, America stands with you.&#8221;

The crowd, made up mostly of 1st Armored Division soldiers but including select 1st Infantry Division soldiers, as well as troops from all services, were all key players in helping America fight the war on terror, Bush said.

&#8220;The 3,000 soldiers, sailors, airmen and Marines and their family members here today represent the more than 100,000 men and women of the United States European Command forward deployed and active in the global war on terrorism both in Iraq and Afghanistan. They&#8217;re also great Americans and willful ambassadors for the United States who work hard every day to enhance our relationship with our European allies,&#8221; said Maj. Gen. Martin E. Dempsey, 1st AD commander, just before the president spoke.

Though this was the second time Bush visited 1st AD troops, reminding soldiers that he was the &#8220;guy serving turkey&#8221; at 2003&#8217;s surprise visit to Baghdad on Thanksgiving Day, he made it clear that the services made up one team.

Petty Officer 1st Class Zsolt Vecsernyes, an ordnanceman who was stationed on the USS Kitty Hawk off of Iraq and Afghanistan, said the president hit the nail on the head.

Bush noted how each unit made up an important piece of the overall mission in Iraq and Afghanistan and how that&#8217;s changing the world.

&#8220;The sacrifices you have made will change the world for decades to come. By fighting terrorists in places like Baghdad and Karbala and Tikrit, you are making sure we do not face those enemies at home. By helping captive peoples gain their freedom, you have made a critical contribution to the history of liberty. And that means the world will be more peaceful, and our children and grandchildren will be more secure,&#8221; Bush said, as the crowd burst into applause.

The president&#8217;s passionate speech served to inspire some soldiers.

&#8220;He kind of gave me motivation to go back downrange again,&#8221; said Spc. Chen Sheng, a combat engineer with the 16th Engineers out of Giessen, Germany.

Ending his 30-minute speech with the same gratitude White House Chief of Staff Andrew Card and Secretary of State Condoleezza Rice began their speeches with, the presidential party left the troops as the sounds of the 1st AD band kicked up.