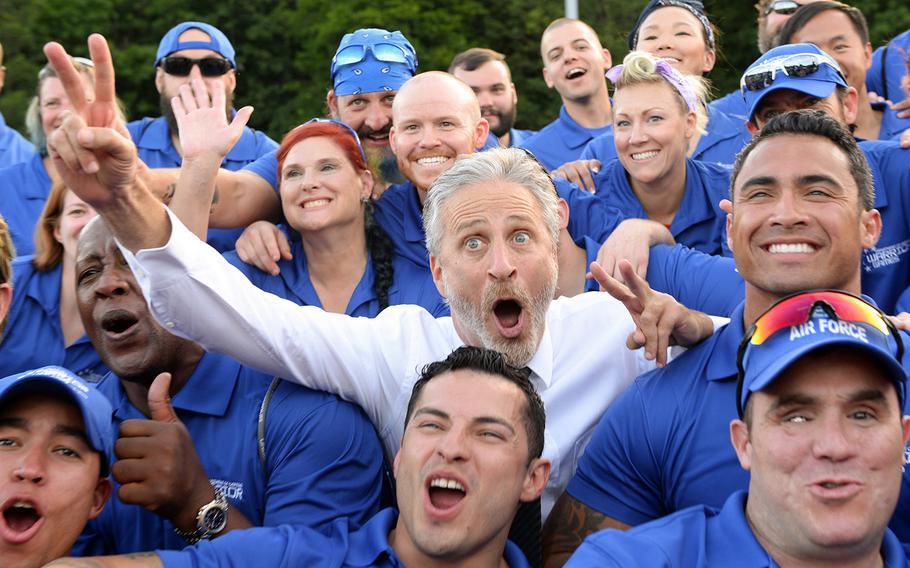 WEST POINT, N.Y. — Not long after the United States invaded Iraq in 2003, Jon Stewart felt the need to better understand the American warriors who had been asked to shoulder the burden of the war.

That quest led him to patients’ rooms at the Walter Reed medical centers, rehabilitation centers and military installations across the nation.

“I was very vocal about my disapproval of the way (the Iraq War) had been handled, and I realized pretty short into that that I didn’t really know — I knew what I was talking about in a pundit way, but I didn’t know anybody who was affected by it, who was in it,” Stewart said Wednesday at the U.S. Military Academy at West Point, N.Y., where he emceed the opening ceremonies of the 2016 Warrior Games. “I needed to educate myself. That’s when I began going to places where I could meet people and talk to them — those who have been wounded.”

More than a decade later, the comedian and activist counts those servicemembers and troops among his greatest inspirations.

“There’s almost nothing in this world that gives me more support than witnessing the tenacity and the resilience and the perseverance of our wounded warriors in their endeavors,” Stewart said. “They’re the ones that make me feel like, ‘Oh, right. We’re going to be OK’.”

The longtime host of The Daily Show, who has championed the causes of veterans and 9/11 first responders since leaving the show last year, learned about the Defense Department’s Warrior Games through a friend. He volunteered his services Wednesday to help kick off the competitions, a gesture organizers described as “a big deal.”

“Jon Stewart is a huge advocate for the military and a strong supporter of our wounded warriors,” said Army Col. Thomas Sutton, one of the event’s lead organizers. “… More than anything else, at the end of the day, I think his involvement and support means a lot to these athletes.”

But Stewart insisted that is a mischaracterization. He is the one who will be bettered by spending time with the about 250 active-duty servicemembers and veterans competing in eight adaptive sports at the historic academy on New York’s Hudson River through June 21.

That is why he felt it was so important to bring his 11-year-old son Nate along with him Wednesday. Stewart wanted to show his son “by example, what is possible,” especially in the wake of the terrorist attack Sunday morning inside a gay nightclub in Orlando that left 49 dead and more than 50 others injured.

Stewart’s participation in the event came as no surprise to many of the wounded warrior participants and attendants.

Medal of Honor recipient retired Army Capt. Florent Groberg said he first met Stewart several years ago while he was in Walter Reed recovering from blast wounds he suffered after tackling a suicide bomber in Afghanistan.

Stewart “is a really good man,” said Groberg, who is attending the games as a spectator and honorary coach for the Army track team. “He spent a lot of time in my room just talking and listening. Awesome.”

The Warrior Games, Stewart said, perfectly embody the spirit of America’s wounded and ill servicemembers, who persevere even after facing the most traumatic of experiences.