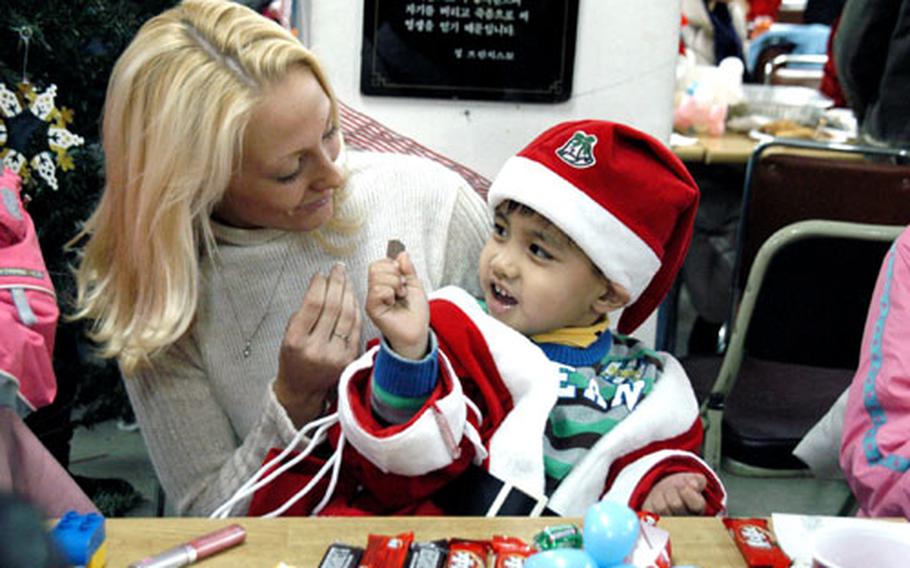 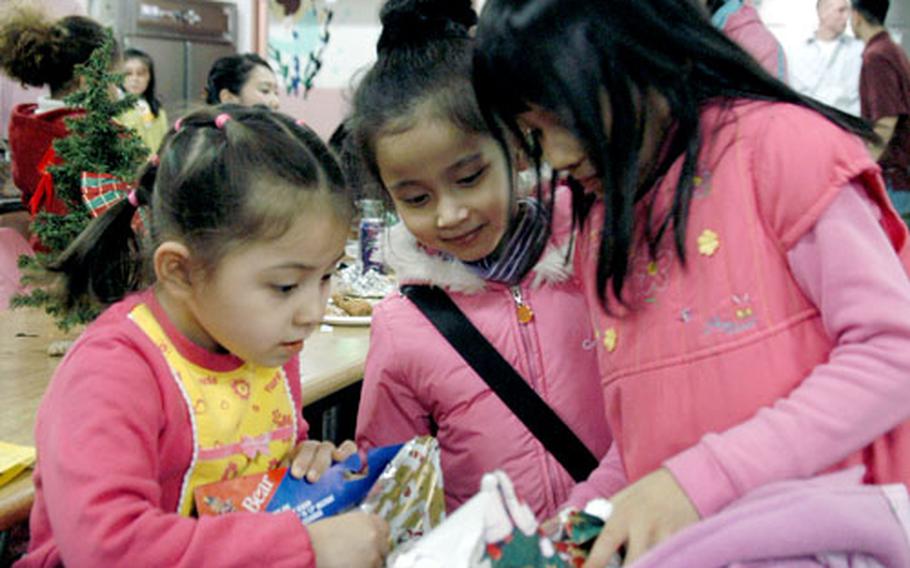 SEOUL &#8212; Park Kuk-wha felt good on Saturday, despite being tired from studying for a recent final exam at school.

The 15-year-old was upbeat because he got to see some old friends at an annual Christmas party given by Pearl S. Buck International Korea and U.S. soldiers from the 524th Military Intelligence Battalion.

&#8220;I like attending this kind of event because I can meet many friends I haven&#8217;t seen for a while and catch up with one another,&#8221; Park said Saturday afternoon in a room at Itaewon Methodist Church crowded with soldiers singing Christmas songs, children clamoring for presents and a Santa Claus struggling to keep his whiskers on.

Like the 49 other children and teens at the party, Park has parents of different races. All of the children&#8217;s mothers are Korean, but their fathers are either from America or another southeast Asian country.

That mixed lineage &#8212; combined with the mothers&#8217; often limited job skills and little if no contact with their fathers &#8212; makes it hard to grow up in South Korea, where blood lines and common heritage are treasured.

A-rum&#8217;s father was a U.S. soldier stationed at Yongsan. But six years later, Ahn is sure the man has no idea he has a daughter and attempts to find him to get child support have failed. Now A-rum gets teased by other South Korean children because her skin is darker than theirs.

The Pearl S. Buck group tries to combat that prejudice and poverty with money, rice and job training for these children and mothers, according to Yi Kyoung-kyune, who runs the group in South Korea.

Yi had reason to celebrate Saturday as well. Last year, his charity was struggling to provide monthly stipends to the families, who depend on a few extra dollars each month to pay the utility bill or the child&#8217;s school costs. Donations had dwindled to about $3,000 a month, which spread thin across the 150 or so children Yi was trying to help.

So Yi set out this time last year to renew his relationships with chaplains and soldiers with U.S. Forces Korea. Soldiers from the 524th have been helping for three years with rice drives and holiday parties, but Yi began soliciting extra help from church congregations and private donations.

The plan worked. The American Chamber of Commerce in Korea recently sponsored job training for eight mothers, who now have full-time jobs as hair stylists and masseuses. At random times during the year, soldiers or contractors with USFK came forward to donate money and clothes to the children. And on one Sunday during a church service on Yongsan Garrison, a special collection was held for the Pearl S. Buck children.

That money went to 45 children throughout South Korea to pay for school costs, and now monthly contributions are averaging $7,000, more than twice as much as last year, he said.

In October, Spc. Ricky Wallace, 25, of Calvert, Md., began asking fellow soldiers at the 524th to buy Christmas presents for the children. By Saturday, more than 100 presents were waiting, each with a child&#8217;s name attached. Another group called USAROK &#8212; which combines the acronyms for America and the Republic of Korea &#8212; brought $1,300 worth of presents for the older children like Park.

Two sisters, Na Eun-young, 10, and Na Eun-byul, 7, came to the party alone and a little frightened. Their mom had to work, and their dad had long ago returned to his home in Bangladesh. A social worker was their escort.

The girls began to feel better as soon as they discovered the soldiers were serving their favorite food: pizza.

The excitement didn&#8217;t end there. Both of them later received a doll and a set of coloring pencils.