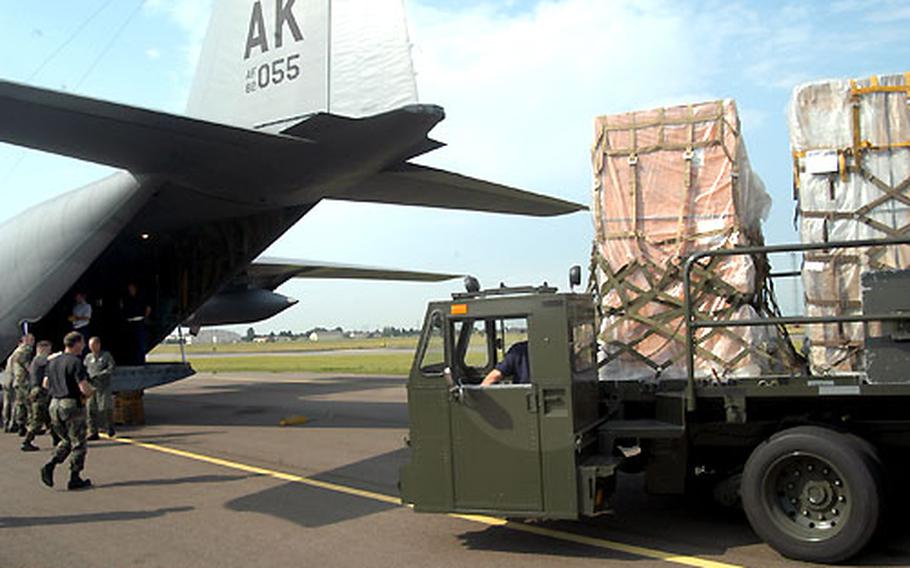 Members of the 727th Air Mobility Squadron at RAF Mildenhall, England, unload a C-130 from the Alaska Air National Guard. Like all cargo handlers during Operation Iraqi Freedom, the unit saw a great increase in its workload. (Ron Jensen / S&S)

Members of the 727th Air Mobility Squadron at RAF Mildenhall, England, unload a C-130 from the Alaska Air National Guard. Like all cargo handlers during Operation Iraqi Freedom, the unit saw a great increase in its workload. (Ron Jensen / S&S) 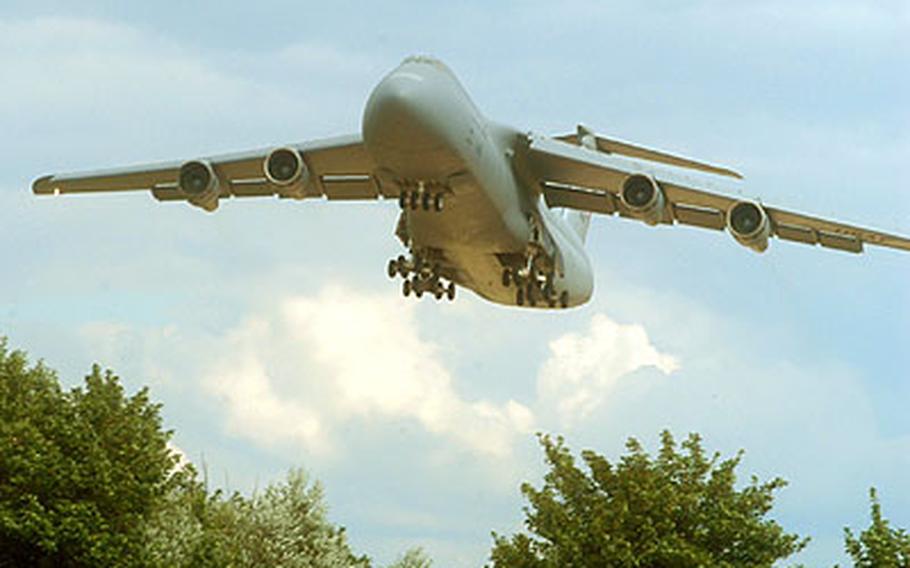 A C-5 Galaxy dwarfs a car while taking off from RAF Mildenhall, England. (Ron Jensen / S&S)

War is a hungry beast.

Bullets and bandages, radios and razor wire &#8212; war swallows it all in big, big gulps and bellows for more.

Since Operation Iraqi Freedom kicked off, 437th Aerial Port Squadron at Charleston Air Force Base, S.C., has been pushing out 600 tons of cargo a day. More than once, the squadron handled 800 tons of cargo destined for the war effort, more than 10 times the normal daily workload. The airmen were unloading semi-trucks in 20 minutes, a fraction of the time allotted to meet requirements.

Col. C.J. Evans, director of global channel operations for Air Mobility Command at Scott Air Force Base, Ill., summed it up: &#8220;Nothing happens until it moves.&#8221;

Meanwhile, the command&#8217;s people and aircraft were supporting ongoing operations in Afghanistan and the Balkans and other points on the globe. That&#8217;s in addition to the regular support of a military that even in the quietest of times is spread throughout several hemispheres.

And the task is made harder by a shortage of aircraft. The Air Mobility Command has made no secret of its need for more airplanes.

Evans was part of a group that developed the Mobility Requirements Study-2005, a detailed look at future requirements of the command and what it needs to meet them. Previous studies had uncovered a shortage of airlift capability to meet the need. This one, Evans said, was no different.

Evans said the past few years have seen a confluence of factors that have led to this situation.

The C-141 StarLifter, an aircraft that was working hard during the Vietnam War, has been slowly becoming extinct. A few years ago, 207 of them were flying. Today, there are only 59 available to Air Mobility Command as the Air Force sends them to the airplane retirement home.

Plus, the giant C-5 Galaxy has proven problematic after more than two decades of crisscrossing the heavens, spending more time in the repair shop than your father&#8217;s Rambler. It has not been able to reach the 75 percent mission capability rate expected.

The workhorse has become the C-17 Globemaster, which is the replacement aircraft for the C-141. But that aircraft is in short supply.

Evans said the study showed a need for 222 Globemasters, but the current fleet is far short of that.

Some of those are not available for airlift, needed instead for the training of pilots, for example. Evans said only about 80 or so are in use for the current airlift mission facing Air Mobility Command.

There is funding in the approved budget to increase the fleet to 180, which will help. But the number of 222 is now considered the bottom-line need.

To keep up with the pace, Air Mobility Command relies heavily on its Civil Reserve Air Fleet, a consortium of civil aircraft from U.S. airlines that carries people and stuff anywhere but into a war zone. They don&#8217;t land at Baghdad, for example, but do land in Kuwait.

As of January, Reserve air fleet included 927 aircraft from 33 companies. Those aircraft carried the bulk of troops into the theater of operations and nearly half the cargo.

But it is still key for the Globemasters and StarLifters to do their work. And for that to happen, they have to keep flying.

Knowing that flying hours would increase, maintainers were put in places where airplanes would land and perhaps need repairs. Spare parts were also in places where they might be needed.

The conditions were rough for everyone, including maintainers who prefer to do their work in dust-free hangars away from the wind, the rain and the searing sun.

There was a tightrope to walk for Inumerable and all maintainers. The tempo was high, but cutting maintenance is not an option. Aircraft still were given their regular maintenance.

Capt. Keith Scheirmann, C-5 weapons systems manager for Air Mobility Command, said, &#8220;As maintainers, we have to give the operators a safe airplane to fly.&#8221;

But in some cases, mission requirements prompted some tough decision-making.

For example, a C-5 has two auxiliary power units. Normally, Inumerable said, the plane doesn&#8217;t fly unless both are working. But for this operation, it was decided to let the big birds fly with only one back-up power unit operational.

&#8220;Our whole thing was to increase the aircraft availability to the warfighter,&#8221; he said.

It worked. The mission capability rate for all of Air Mobility Command&#8217;s aircraft increased during the war, even the troublesome C-5.

The pace hasn&#8217;t slowed much despite the end of the major combat operations. Air Mobility Command is still flying people in and out of the theater, carrying cargo to the 150,000 or so troops in Iraq and to the thousands and thousands of troops elsewhere around the globe.

No one knows that better than Lt. Col. Zyna Captain, commander of the 436th Aerial Port Squadron at Dover Air Force Base, Del. For the 13 months she has been in command, her crews have worked 60-hour weeks for 12 of them.

The largest aerial port in the Air Mobility Command shoved thousands of tons of materiel into the beast&#8217;s belly during the war, just as it did before the war and just as it continues to do today.