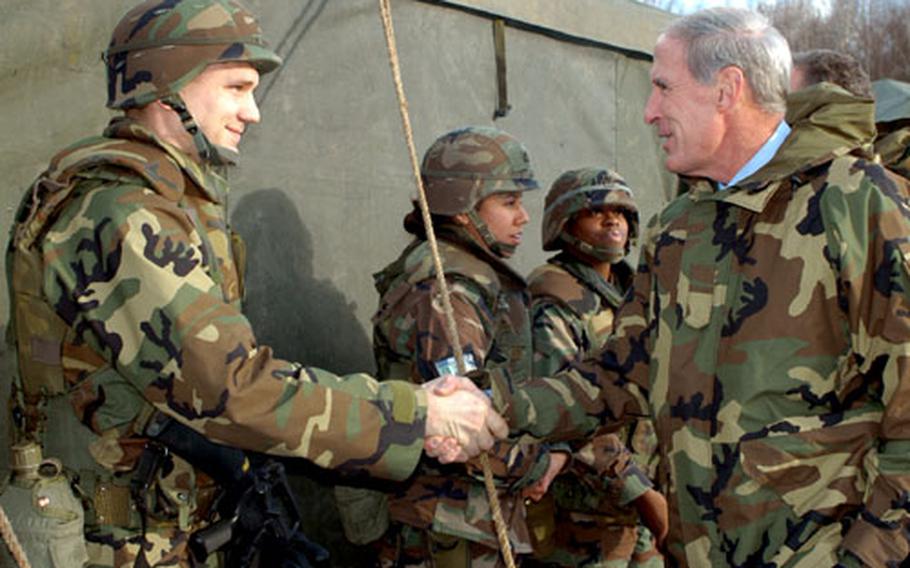 &#8220;The purpose was to be with 1st ID soldiers, give them our best support and to tell them we are proud of them,&#8221; Coats said. &#8220;The soldiers indicated that they are ready and trained for the challenging tasks ahead.&#8221;

After the visit, Coats talked with Stars and Stripes about German-American relations and transformation.

As transformation talks continue, Coats said, the more than 50-year relationship between Americans and Germans has not become a casualty.

&#8220;We are talking with each other very confidently,&#8221; said Coats, who has met with members of the German government, from federal to local-mayor level. &#8220;We want to maintain the long-standing good relationship [with Germany]. There has been excellent cooperation.&#8221;

Although he could give no timeline for how long the transformation, which could include opening U.S. military bases in eastern European countries, would take, Coats said the process is moving forward.

Coats, who represented Indiana in the House of Representatives from 1981-1988, in the Senate from 1989-1999 and served on the Senate Armed Services Committee, said the United States would not pull out of Germany entirely.

However, bases will likely close in Germany and open elsewhere, and Coats said the needs of those directly involved must be considered.

&#8220;We must accommodate our soldiers and families and our German hosts [to make the transformation] convenient for everyone.&#8221;