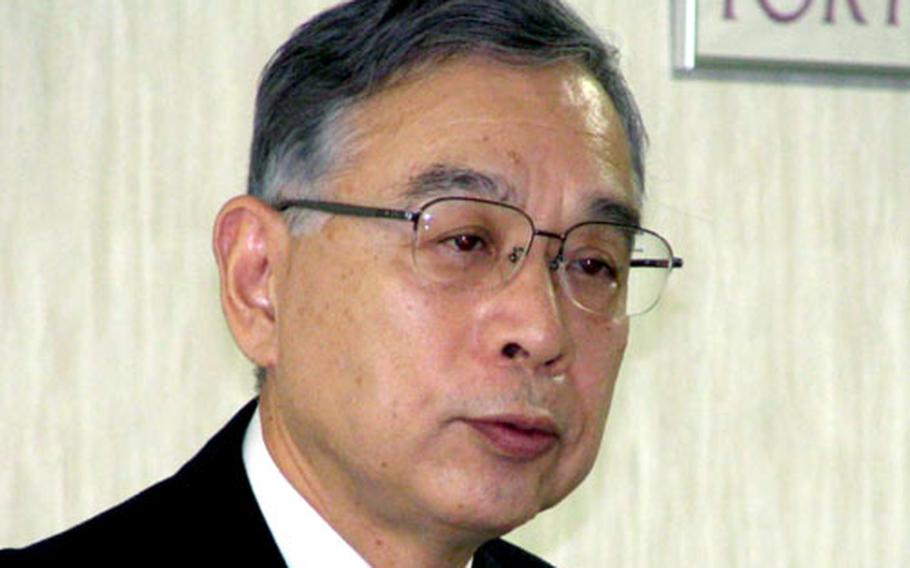 Yuji Miyamoto, the Ministry of Foreign Affairs’ ambassador in charge of Okinawan affairs, Wednesday held his last press conference on Okinawa. He has been named Japan’s ambassador to China. (David Allen / S&S)

NAHA, Okinawa &#8212; Tokyo&#8217;s special ambassador to Okinawa says he is confident Okinawa officials ultimately will accept a plan to move Marine air operations to Camp Schwab as part of a broader realignment of U.S. forces in Japan.

But some tough bargaining may remain before the plan is accepted, Yuji Miyamoto, Japan&#8217;s ambassador in charge of Okinawan affairs, said during a news conference Wednesday.

It was Miyamoto&#8217;s last meeting with the press in the Ministry of Foreign Affairs&#8217; Okinawa office. He has been named Tokyo&#8217;s ambassador to China.

Miyamoto held the Okinawa post for 15 months, for much of that time finding himself in the hot seat as a liaison among Tokyo and Okinawa officials and the U.S. military.

Just before he arrived, a Marine helicopter crashed on the grounds of Okinawa International University, spurring protests over the safety of having Marine Corps Air Station Futenma in the middle of an urban area.

MCAS Futenma remained a contentious topic throughout his tenure. In October, the United States and Japan agreed to a troop realignment outline that would move Marine air operations to a new airfield to be built on Camp Schwab &#8212; a plan that local officials have protested intensely.

&#8220;What&#8217;s important for us is to see the realignment from the aspect of Japan&#8217;s security,&#8221; Miyamoto said. &#8220;At the same time, it is also important to settle this in a form that is acceptable to local communities. Currently, extensive talks are underway by all the people involved.&#8221;

A final realignment report is expected by the end of March.

&#8220;I strongly feel that the present gap between Tokyo and Okinawa will soon be filled through all of our tireless efforts, even though it at times seem too large to fill,&#8221; he said.

Miyamoto said he was pleased to have been able to work closely with the U.S. military. &#8220;Each branch has very respectable leaders,&#8221; he said.

&#8220;What I enjoyed most,&#8221; he added later, &#8220;was candid and straightforward personality most servicemembers have. I was able to talk with them in a very candid manner, both officially and personally, and I was able to spend some enjoyable moments with them.&#8221;

His comments were especially favorable about the annual Special Olympics at Kadena Air Base and opening up part of the base for the annual Okinawa Marathon.

&#8220;What impressed me were activities of American volunteers,&#8221; he said. &#8220;Besides these major events, there are countless volunteering activities in which the people in the military communities offer their time and effort &#8212; all to maintain good relations with local communities.&#8221;

Miyamoto is to be succeeded in the Okinawa diplomatic post by Toshinori Shigeie, 61, whose last post was as Japan&#8217;s ambassador to the Republic of South Africa. Shigeie, who has held several envoy and counselor positions within the United States, is the former director of the North American Affairs Bureau&#8217;s U.S.-Japan Security Treaty Division.