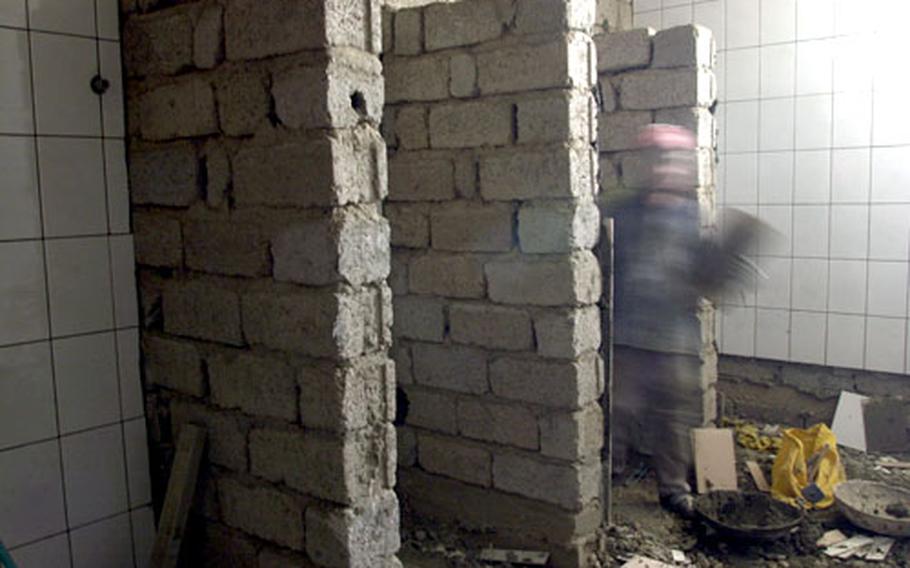 An Iraqi laborer builds a set of showers to be used in a new Iraqi Special Forces barracks near Baghdad. Officials from the Iraq Reconstruction Program say their work is being overshadowed. (Joseph Giordono / S&S)

An Iraqi laborer builds a set of showers to be used in a new Iraqi Special Forces barracks near Baghdad. Officials from the Iraq Reconstruction Program say their work is being overshadowed. (Joseph Giordono / S&S) 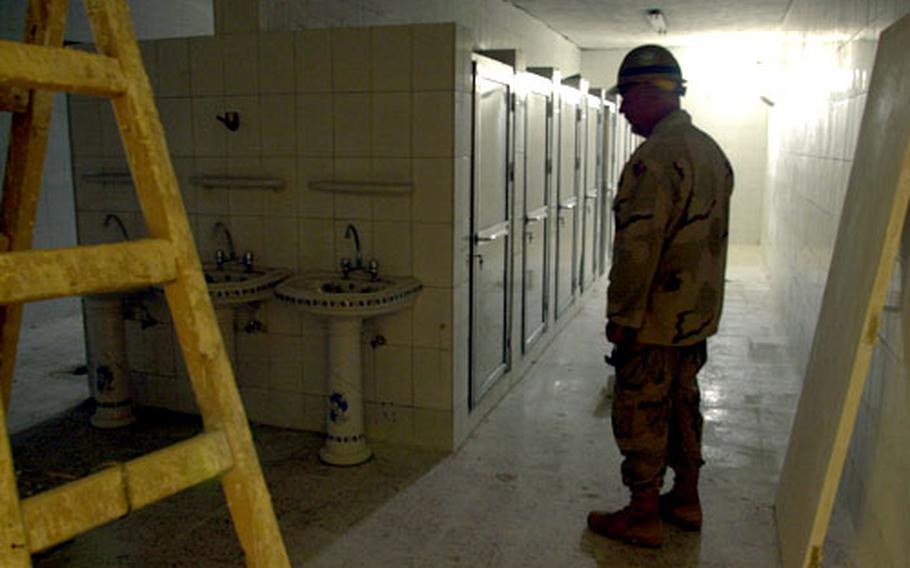 An Army Corps of Engineers supervisor checks out the work done by Iraqi contractors on what will become an Iraqi Special Forces barracks near Baghdad. (Joseph Giordono / S&S) Laborers have been working on this Iraqi Special Forces barracks for several months. Projects focusing on security and utilities are among the priorities for the Iraq Reconstruction Program. (Joseph Giordono / S&S)

Editor&#8217;s note: This is the first in an occasional series on reconstruction in Iraq.

BAGHDAD &#8212; Amid the uncertainty and bloodshed of post-invasion Iraq, an amalgam of U.S. agencies ranging from the Army Corps of Engineers to the State Department is quietly working to rebuild the country&#8217;s infrastructure.

Officials from the Iraq Reconstruction Program, with its $18 billion budget and 2,600 projects ranging from schoolhouses and police stations to electrical power substations, say their work is being overshadowed by news on the fragile security situation and continuing U.S. military deaths.

Progress, they say, is tangible and widespread.

Are they right? As is so often the case in Iraq, yes and no.

In areas where the security situation allows them to build, huge numbers of construction projects have helped return a sense of normalcy. Water and power service have been restored. Schoolkids who sat in ankle-deep mud in classrooms now have new buildings and books. Oil production is approaching pre-war levels.

A total of $7 billion of the $18 billion budget is devoted to security of project sites and workers. Insurgents threaten or kill workers who take jobs paid by American money. And projects in the places where they could do the most good are sometimes dropped because of security concerns.

&#8220;We want people on the fence to pick up a shovel or a hammer instead of an AK-47 or a grenade,&#8221; said Col. Frank Kosich, deputy commander of the Army Corps of Engineers&#8217; Gulf Region District. The district is divided into smaller commands which focus on the north, south and central regions of Iraq.

It is the last category that gets the most focus.

&#8220;We are executing the program with a mind toward the needs of the Iraqi people. With regard to that, electricity is the most important. Clean water is important,&#8221; Kosich said.

Every week, the reconstruction teams issue an update on how much electricity is generated, how much demand there is on the system, and where the shortfalls lie. Power is still intermittent even in Baghdad, as residents swelter through a third summer with limited power.

Officials attribute that to a run-down infrastructure, insurgent attacks on electrical facilities and a lack of qualified engineers to run the sprawling system. But they also say the shortfall in power supplied belies a sign of progress: So many more people are buying air conditioners and other electrical appliances, officials say, that the demand on the system is greater than before. So, as generating capacity is improved, demand continues to grow too fast.

The Iraqi planning minister, Barham Salih, has applauded reconstruction efforts but recently told a donors conference that Iraqis could lose hope unless they see progress soon.

Iraqis seem divided on the issue, and that difference of opinion is evident even within the reconstruction project offices, which try to employ as many Iraqis as possible.

Jabbar Najar was a soldier in the Iran-Iraq war, then later essentially exiled to Libya. He returned to Iraq after the fall of Saddam and now works for the reconstruction program.

Sitting right across from Jabbar, 29-year-old Mohammed Al Aubaedy disagrees. He lived in the Bronx through his school years, and says certain U.S. policies have slowed reconstruction. One policy he fervently opposed was removing qualified technicians with ties to the Baath party. He doesn&#8217;t see why he and others should have to wait for power or water.

Al Aubaedy is fond of telling a joke he says illustrates both the patience and odd hopefulness of Iraqis.

A man goes to a construction site seeking work, the joke goes. The foreman tells him there are no jobs. The man takes this in, then asks when jobs might be available.

The man takes this in, starts to walk away, then stops.

For the reconstruction teams, there is a constant balancing act between security and getting the job done. Some Iraqi contractors don&#8217;t want it known they are taking U.S. money for projects. At the same time, there is an effort to show that the United States is contributing more than soldiers to Iraq.

&#8220;But we&#8217;re executing this in the midst of a fight. Obviously, it costs a lot more money for security and moving equipment and materials. But we are meeting our customers&#8217; expectations.&#8221;

Iraq Reconstruction Program, by the numbers