‘Alzheimer’s is a veterans’ disease:’ New group tries to improve support for vets with dementia 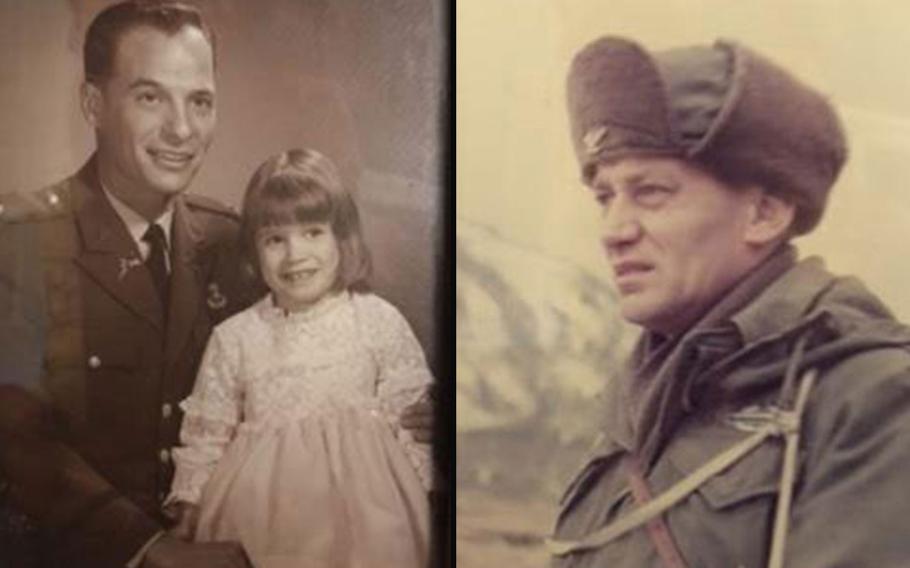 Lt. Col. Bernard Landau, pictured at left with his daughter Shawn Taylor, is now 87 and suffering from Alzheimer's disease. On the right, John Gavin, Taylor's grandfather and Landau's father-in-law, died of Alzheimer's disease in 1987. He was an Army colonel and a West Point graduate. Taylor created the advocacy group VeteransAgainstAlzheimer's to shed light on the greater risk among veterans to develop the disease. (Photos courtesy of Shawn Taylor)

WASHINGTON — Shawn Taylor knows the strain that Alzheimer’s can put on a family.

Her grandmother developed Alzheimer’s in the early 1980s. Then, her grandfather was diagnosed with the disease. Then her mother and father.

At age 21, as an only child and grandchild, the deadly form of dementia forced Taylor to become a caregiver for the next 35 years.

“I understand the intense caregiver needs,” she said. “And as I watch my mother slip away -- unable to recognize me, unable to take care of her most basic needs – I realized I needed to do more.”

It was part of Taylor’s motivation to help create VeteransAgainstAlzheimer’s, which officially launched Tuesday. The group is partnering with the Department of Veterans Affairs and Veterans of Foreign Wars to increase funding for Alzheimer’s research, boost support for caregivers and enroll more veterans who are affected by dementia into the VA.

Her decision to focus her attention on veterans -- a group disproportionately at risk for dementia – was personal, too. Taylor’s grandfather, John Gavin, was an Army colonel and West Point graduate, and her father, Bernard Landau, is a retired lieutenant colonel and Vietnam War veteran.

“We’re learning far too often veterans are disproportionately affected by this disease and are at a greater risk for Alzheimer’s because of their war-related brain impairments,” Vradenburg said. “Alzheimer’s is a veterans’ disease.”

Veterans are at higher risk for Alzheimer’s for several reasons, explained David Cifu, a researcher and traumatic brain injury specialist at the VA. There’s a higher prevalence of mental health disorders in the veterans community, he said, which creates more likelihood of developing dementia. According to a study in the Journal of the American Geriatrics Society, the risk of Alzheimer’s doubles for veterans with post-traumatic stress disorder.

Traumatic brain injury also increases the risk of dementia, and of developing it earlier in life, according to a 2014 study published by the American Academy of Neurology. Older veterans with TBI are 60 percent more likely to develop dementia than other veterans, according to the study.

“Now more than ever, we need to redouble our efforts,” Cifu said.

One study published by the National Institute of Health estimates 420,000 veterans will have developed Alzheimer’s between 2010 and 2020.

The VFW got involved in order to improve the numbers, said Ryan Gallucci, a director with the VFW. Some veterans and families don’t realize they qualify for VA benefits, such as caregiver support, Gallucci said.

Others are barred from those services because of VA regulations. For instance, some caregiver benefits are available only to family members of veterans wounded post-9/11. There’s legislation in Congress, H.R. 1472 and S. 591, that would expand the services to all veterans.

Karen Garner, who was a caregiver to her husband, Senior Master Sgt. Jim Garner, said she didn’t qualify for VA assistance because of income restrictions. She said her husband, who died of Alzheimer’s last year at age 52, was confused and hurt that the VA wouldn’t provide help.

“With the low enrollment numbers in VA… we have to do better than this,” Gallucci said. “This is where we can help make a difference.”

Increasing funding for Alzheimer’s research is also key, said Cifu. In 2016, the VA conducted 157 research projects on Alzheimer’s disease across 44 locations, at a cost of $30 million.

“This sounds like a lot, and it is, but we need to do even more,” he said.

Cifu is part of a consortium of specialists at the VA and Defense Department starting a new study to find connections between brain injury and dementia, he said. The group is looking to get as many veterans and servicemembers involved as possible.

At age 56, Taylor is still a primary caregiver. Her mother is in the late stages of Alzheimer’s, and her father was just diagnosed with the disease last fall.

Taylor is hoping improvements in research and support could help Vietnam War-era veterans such as her father -- who’s now 87 and living in a nursing home -- as well as the potential surge of Iraq and Afghanistan veterans who could develop the disease in the next 20 to 30 years.

“What we want to do is start the conversation,” Taylor said. “Nobody wants to talk about it, but we have to talk about it. It’s happening, and what’s ahead of us is going to be devastating.”