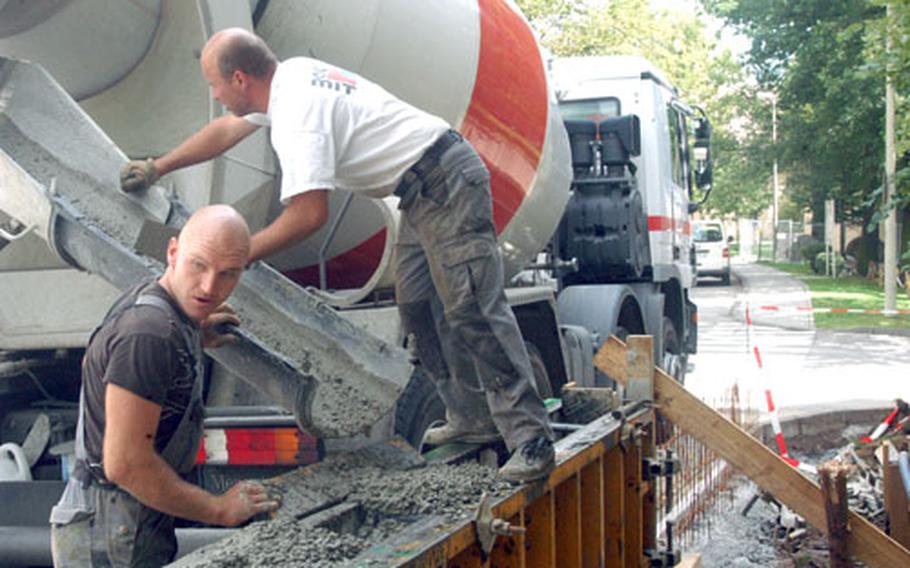 Christian Lipp, left, and Rudolph Ritter of B.I.G Bauunternehmen GmbH, pour a concrete wall Thursday outside a building at Kelley Barracks in Stuttgart, Germany. The building will be one of many used by the U.S. Africa Command. (Charlie Coon / S&S)

Maj. Gen. Herbert L. Altshuler will become the command&#8217;s director of plans and programs. He is currently special assistant to the commander at U.S. Army Special Operations Command at Fort Bragg, N.C.

The Defense Department also confirmed that Africa Command, known as AFRICOM, will have its own special-operations component when it named Col. Patrick M. Higgins &#8212; who has been nominated for his first star &#8212; to become commander of U.S. Special Operations Command Africa.

The command, which is currently being assembled by a Stuttgart-based AFRICOM Transition Team, is scheduled to stand up on Oct. 1. The plan is for the command to gradually assume control of U.S. military activities on the African continent over the next year while operating under the U.S. European Command.

AFRICOM is scheduled to oversee the military-to-military training that has been taking place for years between U.S. forces and those from African nations.

It is also shaping itself to work with the State Department, the U.S. Agency for International Development and humanitarian groups. One of AFRICOM&#8217;s advertised goals is to use its military assets to address issues such as HIV/AIDS, economic development and regional cooperation on the continent.

In October 2008, the command is scheduled to become self-standing. Army Gen. William E. Ward has been nominated to become AFRICOM&#8217;s first commander. His nomination is expected to be voted on in September by the Senate. Ward is currently the European Command&#8217;s deputy commander.

Those components would act as coordinators between those services and AFRICOM. No standing combat forces of soldiers and Marines are planned to be assigned to the command. Soldiers and Marines have conducted much military training on the continent.

Navy and Air Force components for AFRICOM were still being discussed, Catto said.

For now, the command is expected to employ about 800 people over the next year, Catto said.

Among Altshuler&#8217;s responsibilities as head of plans and programs will be seeing that the command works effectively with other government agencies as well as humanitarian groups, said Vince Crawley, an AFRICOM spokesman.

Higgins and his command would be responsible for coordinating the work of Green Berets, Navy SEALs and other special-operations troops.