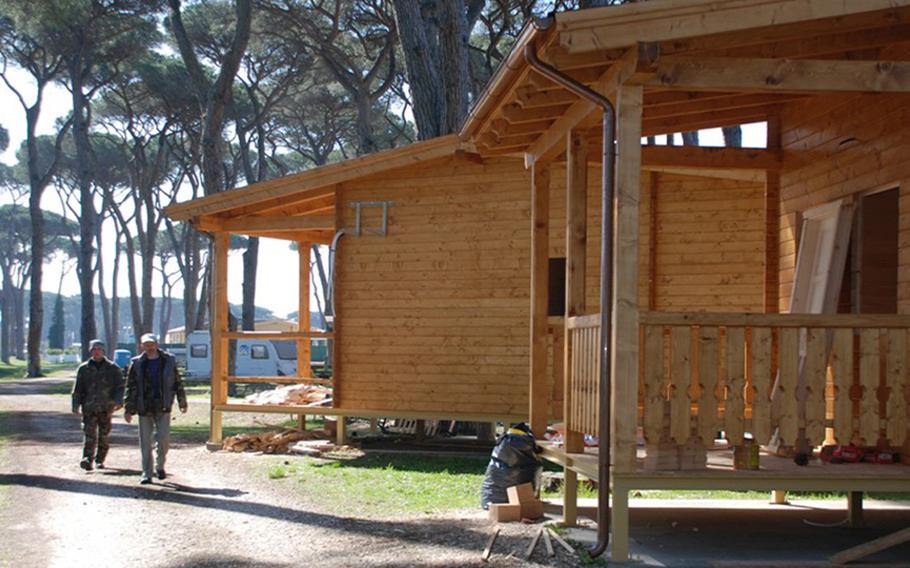 These log cabins at Camp Darby in Italy were built in 2008 and designed for a family of five to sleep comfortably. The campground and lodging are among the facilities that will be closing as part of the European Infrastructure Consolidation. (U.S. Army)

KAISERSLAUTERN, Germany — The Pentagon’s consolidation announcement Thursday bore no real surprises for U.S. Army Europe, which has argued — persuasively, it would seem — that it’s already been right-sized.

Years of prior cuts and reshufflings have left the Army with about 28,000 soldiers stationed in Europe concentrated in seven major garrisons. At its Cold War height, the service had some 213,000 soldiers assigned to more than 850 garrisons, according to U.S. European Command.

Rather than using a cleaver, this round instead trimmed away some of the rough edges, taking some buildings and outlying properties away from garrisons. These will, the Army says, “improve operations, eliminate excess infrastructure and reduce costs.”

In Baumholder, for example, the Army will close its water works and switch to the municipal water supply — a move the local mayor has advocated. Part of a small base in Kaiserslautern will close and the services it offers will move closer to where more soldiers work.

While those are some of the smaller moves in the announcement, they were big enough for the Pentagon to count them among the 15 sites returning to their host nations as the result of the lengthy and long-anticipated consolidation plan.

“None of these changes would happen if we weren’t able to maintain readiness to complete the mission,” Lt. Gen. Ben Hodges, U.S. Army Europe’s commander, said in an email. “I wouldn’t say there were any surprises, given how long this study has been going on and the multitude of options that were discussed.”

Among the largest installations on the chopping block are Ansbach garrison’s Barton Barracks, a small base somewhat removed from the community it supports, and Wiesbaden garrison’s Mainz-Kastel Station, where operations have already wound down significantly.

While short on surprises, the announcement did start to clear up some questions about other bases that are losing tenants from earlier rounds of cuts.

The sprawling U.S. Army hospital at Landstuhl, for instance, is expected to empty out in 2022, when its replacement at nearby Rhine Ordnance Barracks is complete. The U.S. Army Corps of Engineers will fill at least part of the old hospital, relocating its Europe headquarters there from the Amelia Earhart hotel in Wiesbaden in 2023, a garrison official said Friday.

An airfield near the hospital, vacated last year when its helicopter unit relocated to Bavaria, will be the new home of the Defense Information Systems Agency, which will move to the hilltop base from Stuttgart in 2019.

The announcement also brought the closure of Husterhöh Kaserne in Pirmasens. The base is a fragment left over from previous years’ cuts. The only sizeable unit left at the base is the U.S. Army Medical Materiel Center-Europe, which will relocate to the Kaiserslautern Army Depot, itself a recent victim of civilian job cuts.

Overall, the announcement will lead to the loss of 152 active-duty positions across Europe over the next eight years or so. In its last major round of cuts in 2012, the Army slashed two whole combat brigades from the Continent.

One under-the-radar move in the announcement is the closure of a popular vacation destination on Italy’s west coast. The “partial closure” of Camp Darby means the demise of the Sea Pines Recreational Facilities, operated by Army Morale, Welfare and Recreation.

According to the Army, most of the moves won’t happen for years.

“As I’ve said before and echoing Gen. (Philip) Breedlove,” the top U.S. general in Europe, “I think the Army is the right size for the current mission in Europe,” Hodges said. “Between the assigned forces and those rotating through as part of the European Rotational Forces, we have the right people at the right time to complete today’s missions.”