Alpine village in Italy where F-16 crashed returns to normal 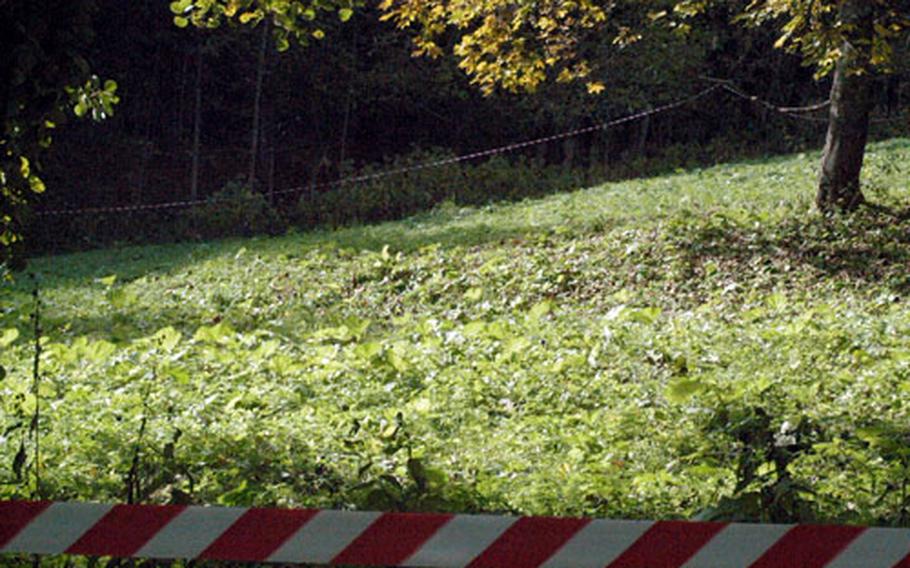 The only noticeable difference in this Italian alpine meadow is the red and white tape that still keeps people away from the site where an F-16 from Aviano Air Base crashed on Sept. 18. Other than that, life has pretty much returned to normal, according to a local resident. (Kent Harris / S&S)

SORAMAE DI ZOLTO ALTO, Italy &#8212; Two weeks after an Air Force jet plummeted to the ground near this tiny Alpine village, life is pretty much back to the way it was before.

Soramae said he didn&#8217;t see the crash, which took place in the early evening hours: He was inside his home watching television. He said he heard what he thought was thunder, but didn&#8217;t think much about it because a heavy storm was hitting the area that day.

During the next few days, about 50 American personnel in uniform &#8212; and about the same number of media &#8212; showed up, he said. Two tents set up by the Americans and a few portable toilets in the field near the crash site still remain.

Other than that, it&#8217;s been pretty quiet, Soramae said.

Two Carabinieri officers &#8212; who declined to talk to the media &#8212; are on hand to make sure no one crosses the red-and-white ribbon that stretches between trees.

The crash site can&#8217;t be seen from the small, one-lane road that serves as the only access to the village from the rest of the world. The village, boasting an elevation just more than 4,000 feet above sea level, consists of fewer than a dozen homes. A small bridge below leads to the town of Zoldo Alto, which has more homes and a few businesses.

Sitting on a bench in front of his home, Soramae shakes his head negatively when asked if the crash caused him any concerns.

But 30 miles to the southeast, that&#8217;s obviously not the case. Base officials aren&#8217;t saying much about the crash, citing an ongoing investigation.

Maj. Timothy Palmer, the plane&#8217;s pilot, ejected safely and is back at work after a short stay at the base hospital. He&#8217;s declining interviews, said Capt. Jennifer Ferrau, chief of public affairs for the 31st Fighter Wing.

A news release issued by the base said Palmer, assigned to the 510th Fighting Squadron, was flying a routine mission from the base when the accident occurred. An accident board is heading the investigation. Ferrau declined to identify its members.

She said training flights &#8212; which leave the base routinely almost every day &#8212; are back to normal.

Ferrau said there wouldn&#8217;t be any details released about the crash until the investigation is complete. She said the base wouldn&#8217;t be receiving a replacement for the $18.8 million aircraft because it still has enough fighter jets to complete its missions.