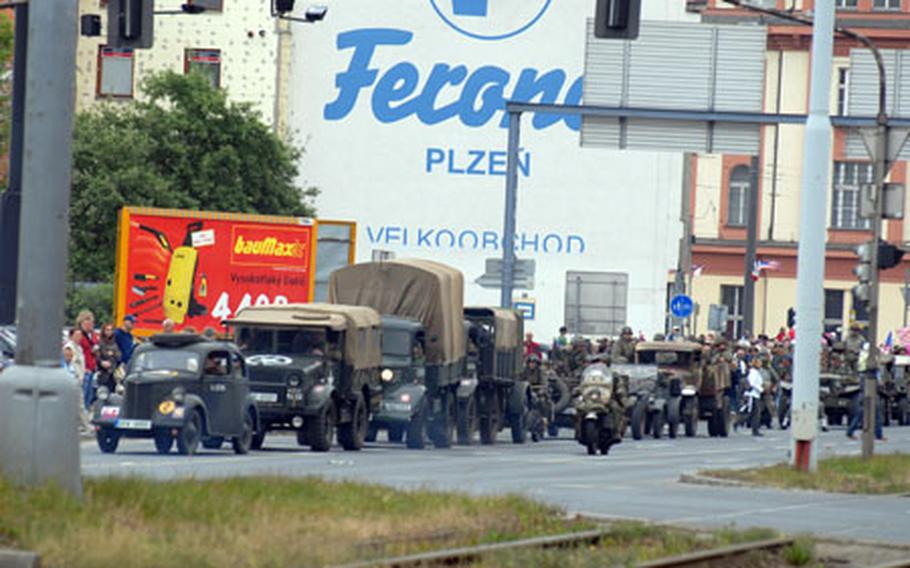 U.S. military vehicles paraded through Plzen, Czech Republic, on Sunday to commemorate the town&#39;s liberation by U.S. forces on May 6, 1945. (Seth Robson / S&S)

U.S. military vehicles paraded through Plzen, Czech Republic, on Sunday to commemorate the town&#39;s liberation by U.S. forces on May 6, 1945. (Seth Robson / S&S) 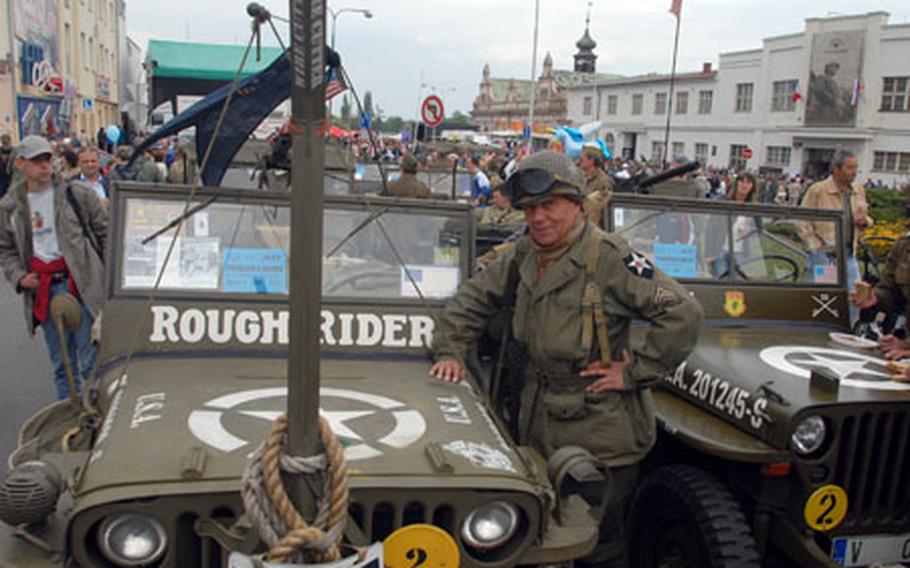 Mirko Trubka drove his 1942 Jeep in a parade through Plzen, Czech Republic, on Sunday that commemorated the town&#39;s liberation by U.S. forces on May 6, 1945. (Seth Robson / S&S) 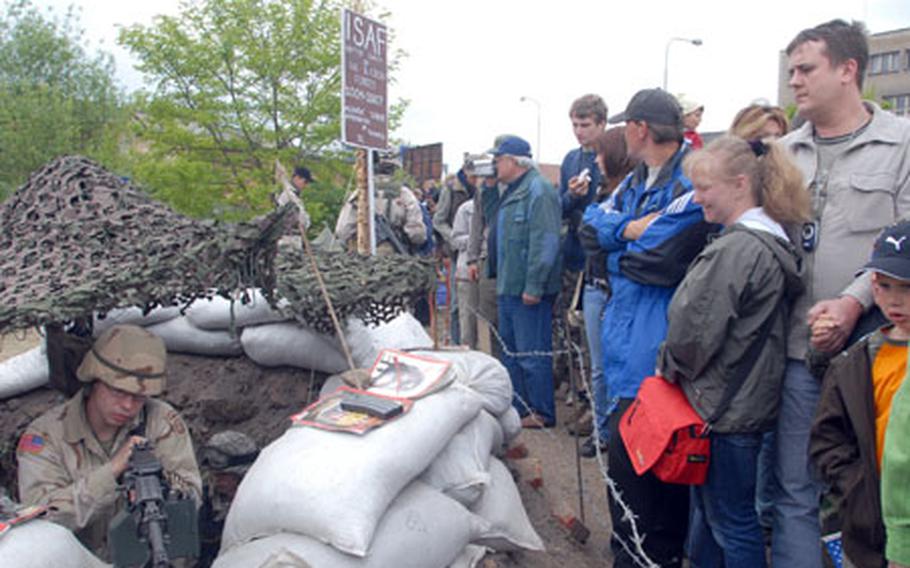 From left: Czechs check out a “Czech-U.S. base camp in Afghanistan” on Sunday at the Patton Memorial in Plzen, Czech Republic. The base camp included role-players acting as modern-day Czech and U.S. troops. (Seth Robson / S&S) 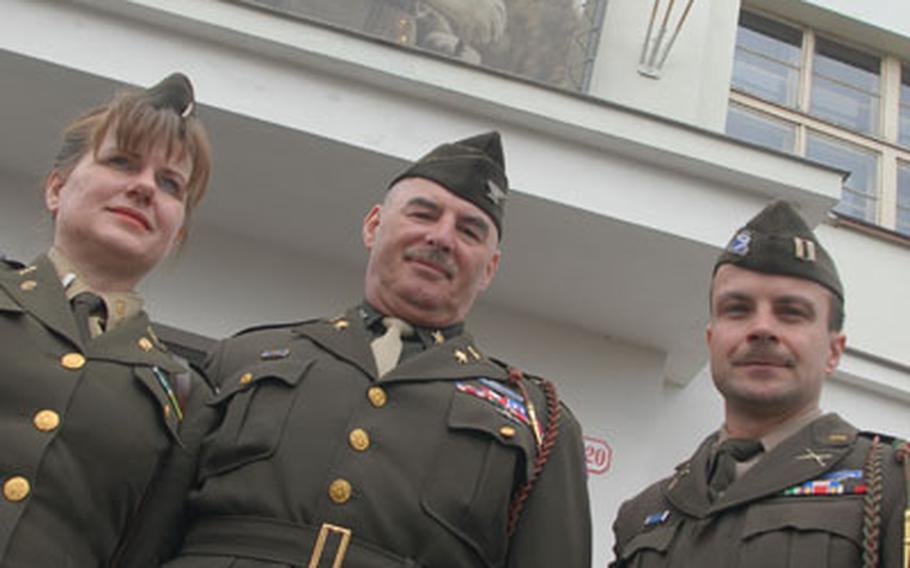 Crowds of American-flag-waving locals lined the streets here Sunday, cheering on a convoy of vintage military vehicles staged to mark the 62nd anniversary of the town&#8217;s liberation by U.S. forces during World War II.

The convoy included 120 vehicles ranging from Jeeps and half-tracks to trucks and motorcycles. It was part of a series of events in Plzen this month celebrating America&#8217;s involvement in liberating the town and the Western Bohemian region of what was then Czechoslovakia from occupying Nazis.

Local resident Mirko Trubka, who drove his 1942 Jeep in the parade, remembers when the Americans rolled into town 62 years ago on May 6, 1945.

&#8220;I was 6 years old then and I&#8217;m 68 now, three years older than my Jeep. Back then, we had our hands full of these,&#8221; he added, pulling a U.S.-made .50-caliber Browning machine-gun bullet from his pocket. Youngsters used to throw the shells on the fire and watch them explode, he recalled.

Like many in the convoy, Trubka wore a 2nd Infantry Division uniform. The first U.S troops in Plzen were from 2nd ID.

A few Americans joined with the Czechs at the parade, including Omar Bartos, a U.S. law student studying in the Czech Republic who said he was enjoying the celebration and the positive feelings from the locals.

Rosie Crimens, a German civilian worker at the Grafenw&#246;hr Training Area transportation office in Germany, got into the spirit of things dressed as a Women&#8217;s Army Corps lieutenant.

But some Germany-based U.S. personnel in the crowd adopted an attitude that would have warmed the hearts of the nation&#8217;s former Communist rulers.

Outside the museum kids checked out a &#8220;Czech-U.S. base camp in Afghanistan&#8221; that included role-players acting as modern-day Czech and U.S. troops.

Patton Memorial museum curator Milan Jisa, who also dressed as a U.S. soldier Sunday, was eager to show off his collection, which included an array of U.S. uniforms, weapons, parts of a B-17 bomber that crashed near Plzen and other items.

Jisa, who started the museum with another Czech collector, Iban Rollinger, said he collected the objects more than 40 years.

When the country was ruled by Communists the pair had to hide their collections. Before the Iron Curtain came down in 1989 anyone who suggested Americans liberated Plzen risked jail, Jisa said.

The museum includes Communist propaganda that seeks to downplay the U.S. role in freeing Western Bohemia as well as a U.S. film of 2nd ID troops entering Plzen.

The collection includes a helmet autographed by a group of U.S. soldiers, medicine, postcards, letters, pictures, Camel cigarettes, coffee, chewing gum, Hershey&#8217;s chocolate and copies of Yank, an Army magazine, and Stars and Stripes left behind by the American troops.

One display shows mannequins dressed in 2nd Infantry Division uniforms taking a German prisoner while another is devoted to the rescue of the country&#8217;s Lipizzaner horses by the 2nd Cavalry Regiment, now based in Vilseck, Germany.

The story of the U.S. role in the liberation of Czech lands during WWII is written in the book &#8220;Along Came Freedom&#8221; by Roucka Zdenek, on sale at the museum.