Allies could do more in Mideast, NATO chief says after Trump calls on members to step up 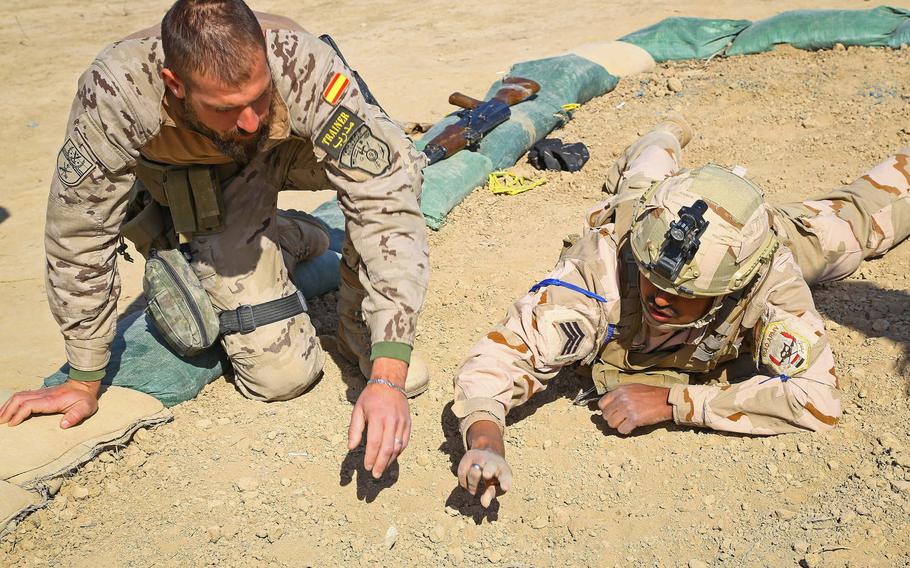 A Spanish trainer goes over techniques to detect improvised explosive devices with an Iraqi soldier at the Besmaya Range Complex, Iraq, in 2018. NATO Secretary-General Jens Stoltenberg responded to a request by President Donald Trump that European alliance members become more involved in the Middle East by saying on Jan. 9, 2020, that the alliance can do more in the volatile region. (Antonio Lewis/U.S. Army)

NATO Secretary-General Jens Stoltenberg said Thursday the alliance can do more in the Middle East but stopped short of detailing how allies might satisfy President Donald Trump’s demand that they become more involved in the region.

“NATO has the potential to contribute more to regional stability and the fight against international terrorism,” Stoltenberg told reporters at the alliance’s headquarters in Brussels.

A day earlier, Trump called on NATO to get more involved in the Middle East, where tensions have soared after the U.S. killed a top Iranian general last week.

Trump and Stoltenberg spoke by phone Wednesday after the U.S. president, in an address to Americans following Iranian retaliatory strikes for the killing of Maj. Gen. Qassem Soleimani, urged allies to step up.

NATO has about 500 troops in a training mission in Iraq, but that effort has been suspended in light of security concerns in the country. The allies have said the mission could resume in the future.

It was not immediately clear what Trump wants from NATO or what more the alliance, already heavily involved in detering Russian aggression in Europe, could do. It was too early to go into specifics, Stoltenberg said.

Trump has made increasing defense spending by NATO allies a top foreign policy priority but he also has called on the organization to focus more on terrorism threats and play a role in countering the Islamic State group.

In 2017 NATO formally joined the U.S.-led coalition to counter ISIS. Stoltenberg said the priority for NATO in general is training local forces to fight against terrorism.

“What president Trump called for yesterday was more NATO involvement and we are looking into what more we can do,” he said. “I will not speculate about the outcome.”