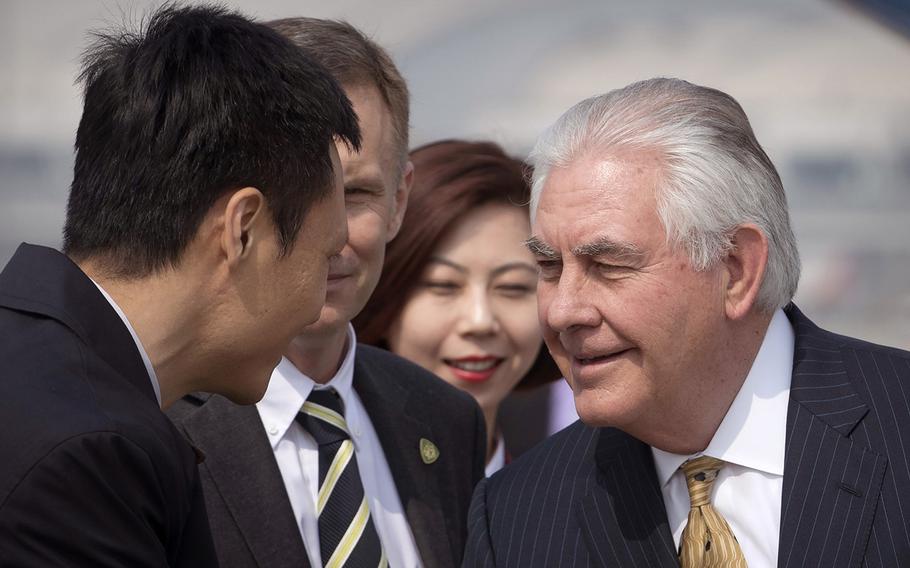 Tillerson, who initially planned to skip the meeting over a scheduling conflict, will arrive at NATO’s headquarters with a demand that members develop a clear roadmap for reaching a target that calls for dedicating 2 percent of gross domestic product to defense.

“The goal here is real capabilities, not just defense spending for the sake of defense spending,’ said a senior State Department official in a Tuesday briefing with reporters.

The issue of insufficient spending among NATO members on defense has dominated discussions between Washington and leaders in the 28-nation alliance. Top U.S. officials have warned President Donald Trump will not tolerate an alliance in which the U.S. carries a disproportionate share of the security burden.

Past administrations have made similar complaints, but Defense Secretary James Mattis in February issued a new ultimatum that the U.S. could “moderate” its support for NATO. The vague threat raised concerns across Europe about the level of commitment to a military pact that dates to the early days of the Cold War. Washington has not clarified what steps it could take if allies fall short on spending.

“The president has made very clear, and the secretary will reinforce this on Friday, that it’s no longer sustainable for the United States to maintain a disproportionate share of NATO’s deterrence and defense spending,” the State Department official said, speaking under the customary condition of anonymity.

“Absolutely no apology for that,” the State Department official said.

Some members have already indicated they plan to comply. The Baltic countries, Poland and Romania are already at or near the 2 percent mark.

Germany, which spends only about 1.2 percent of GDP on defense, has come under intense scrutiny from Trump. The country has long been reluctant to build a military that matches its economic heft, a consequence of the its crushing defeat in World War II.

But in recent years, Berlin has gradually taken on a larger role in military matters, such as sending troops on counterterrorism missions in Mali and training of Iraqi forces.

German Chancellor Angela Merkel has said the country must focus more on defense, but Berlin appears inclined to go at its own pace toward the 2 percent goal.

German Foreign Minister Sigmar Gabriel, who will be in Brussels Friday for talks with Tillerson, has said he opposes the idea of increasing spending at a faster rate to appease Washington, particularly if it comes at the cost of domestic social welfare programs. “That is not how we are going to do this,” he said.

Gabriel has complained about a U.S. fixation on defense spending, saying Washington should consider Germany’s efforts in development and other nonmilitary measures that are linked to security challenges, such as the migrant crisis.

The diverging points of view are likely to emerge as a flashpoint on Friday and again in late May, when NATO heads of state, including Trump, meet in Brussels.

“We’re going to push — continue to push Germany and watch them honor that commitment,” the State Department officials said.

A day ahead of Tillerson’s talks with defense ministers, on Thursday, the alliance will convene a meeting of its NATO-Russia Council at the ambassador level. Such sessions with Russian diplomats were once routine at NATO but have become less frequent as tensions with Moscow have increased.