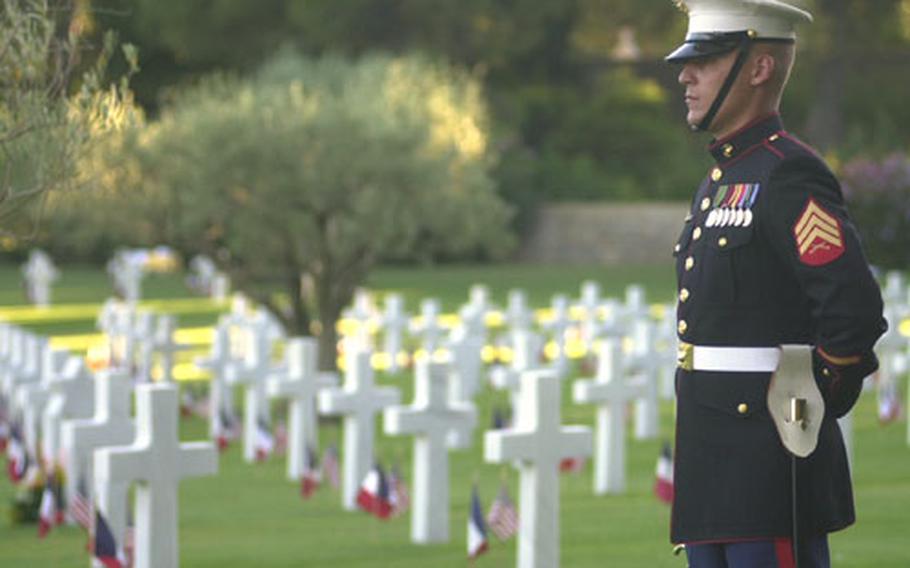 A U.S. Marine stands besides rows of graves at Rhone American Cemetery in Draguignan, France. About 1,500 Americans and French on Saturday evening commemorated the 60th anniversary of the Allied landing in southern France. (enw# 61p pp) (Scott Schonauer / S&S)

A U.S. Marine stands besides rows of graves at Rhone American Cemetery in Draguignan, France. About 1,500 Americans and French on Saturday evening commemorated the 60th anniversary of the Allied landing in southern France. (enw# 61p pp) (Scott Schonauer / S&S) 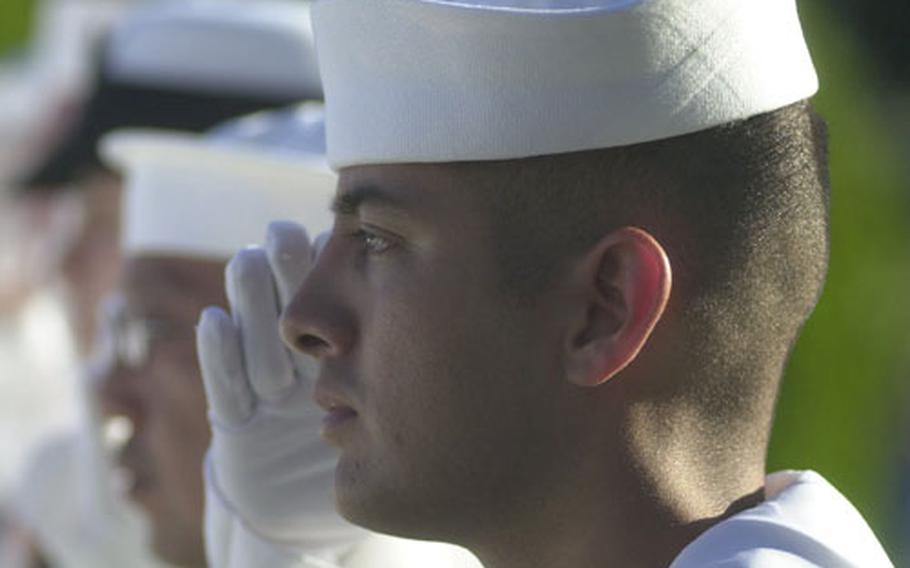 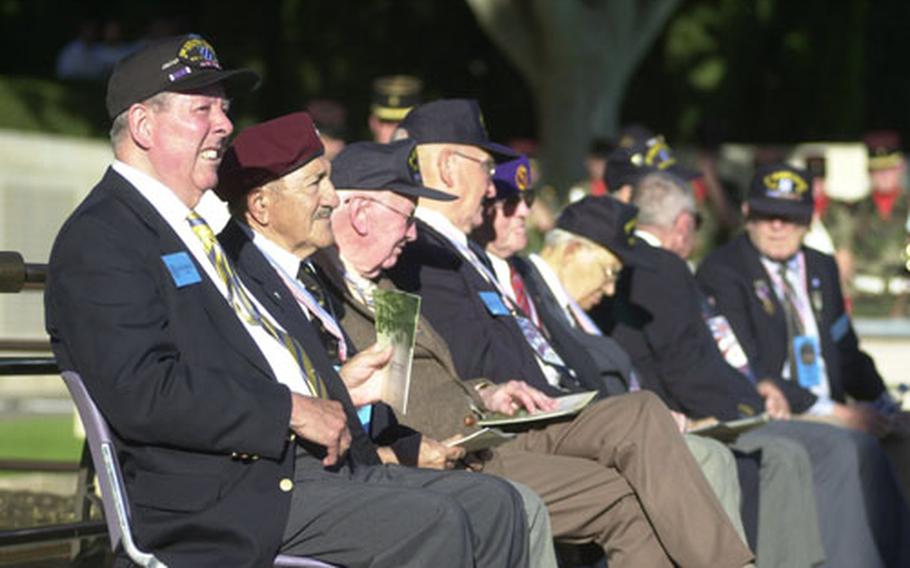 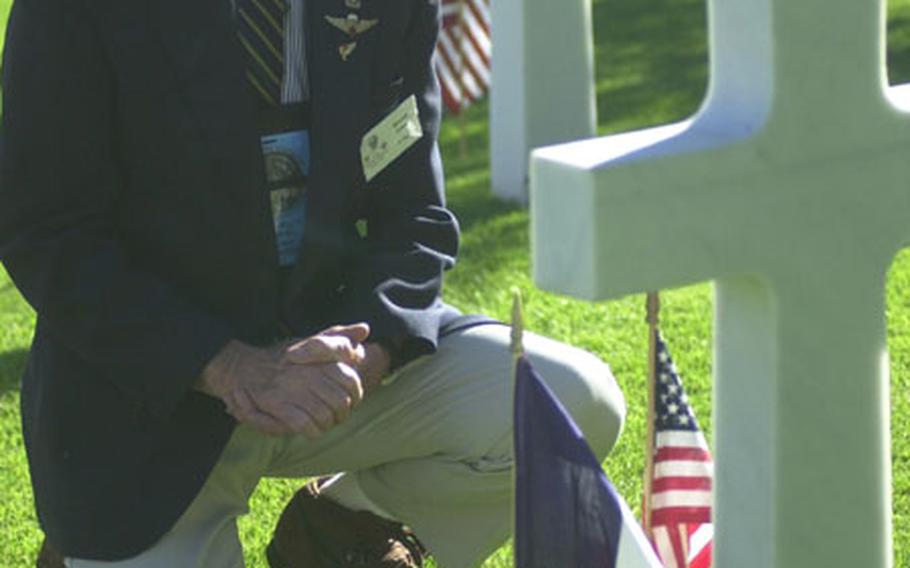 DRAGUIGNAN, France &#8212; Wave after wave of Allied troops had stormed the shores of southern France by the time then-U.S. Army Capt. Francis Even arrived that hot August afternoon.

During World War II, Even was in charge of getting some 200 tanks and vehicles off the assault cargo ship USS Oberon for a mission called Operation Dragoon. He helped prepare his men to unload the equipment and watched them leave the ship to face an entrenched German army in much the same way Allied forces invaded Normandy on D-Day.

Sixty years to the day he stepped foot on the beach, he hasn&#8217;t forgotten the horror that greeted him: the mangled body of a young infantry soldier who had been carrying a .45-caliber submachine gun and a weapons belt full of extra magazines.

Hundreds of U.S. and Allied troops died trying to drive the Nazis out of southern France during the Battle of Provence. Many of the casualties were killed the first couple of days of the assault.

On the 60th anniversary of the landing, French and American war veterans and active-duty servicemembers Saturday evening commemorated the beginning of the historic invasion, which some people call the &#8220;forgotten Normandy.&#8221; They also honored the fallen during a formal ceremony at Rhone American Cemetery and Memorial, where 861 Americans are buried.

The invasion and ensuing battle up the Rhone Valley has always been overshadowed in history books and war documentaries by the Normandy assault, but the landing proved crucial to the liberation of France from the Germans.

Adm. Gregory Johnson, commander of U.S. naval forces in Europe, reminded veterans during the ceremony of the significance of their achievement, quoting Gen. Dwight D. Eisenhower, the supreme allied commander at the time.

&#8220;There was no development of that period which added more decisively to our advantages or aided us more in accomplishing the final and complete defeat of the [German] forces than this secondary attack coming up the Rhone Valley,&#8221; Eisenhower said.

Allied war planners began thinking about taking southern France in August 1943. They had originally wanted to launch attacks at Normandy and southern France simultaneously, but American factories couldn&#8217;t build enough landing craft and they had to scrap the idea.

After the Normandy invasion in June, Navy ships transported the D-Day landing craft to the Mediterranean Sea in preparation for the southern invasion.

On the eve of the attack, assault units landed to protect the flanks of the invasion areas on the beach. As an Allied armada of 500 warships bombed German forces, the U.S. 3rd, 36th and 45th divisions of the U.S. VI Corps attacked areas from St. Tropaz to St. Raphael.

Gene Frice, a paratrooper with the 517th Parachute Regiment, was one of them. He landed in the hills with the British, far away from his unit. Many of the soldiers in his unit had not seen much combat and they were nervous.

The toughest part wasn&#8217;t the landing, but the drive up north as they chased the fleeing German army, he said. Troops went weeks with only limited equipment and food. As they pushed forward, new soldiers joined the unit to replace the casualties. The replacements often died before they got to know their new squad.

The fighting got tougher as they got into the mountains. When Frice heard one of his best friends was killed, he said his youthful invincibility vanished. He worried he could meet the same fate.

Patrick Heagerty, a sergeant at the time, arrived on the beach with the second wave and didn&#8217;t meet much resistance.

Heagerty said what he remembers most about the landing is the scattered gas masks on the shore. Soldiers had to bring the masks in case of a gas attack, but infantrymen found them cumbersome and ditched them as soon as they landed. His squad landed at St. Tropaz.

Between 40,000 and 60,000 U.S. soldiers stormed the beaches in addition to French and British troops. Some 450,000 men took part in the invasion, and soldiers often got separated from their units in the chaotic landing.

Soon after hitting the beach, Heagerty&#8217;s unit thought it spotted a group of German soldiers. But they turned out to be American paratroops. &#8220;We almost shot the hell out of them,&#8221; he said.

As the days went by and his unit moved farther north up the Rhone Valley, the weather got colder and the fighting got more intense. &#8220;My own personal attitude is after a while, jeez, I wanted to get out of there. But you can&#8217;t run away, obviously,&#8221; he said.

The U.S. VI Corps continued to push north. On Sept. 11, the U.S. 7th Army met up with the 3rd Army from Normandy. In less than a month, U.S. troops that stormed southern France had traveled 400 miles and had isolated the remaining German troops in southwest France.

After the war, Even would go to law school and become a lawyer. He is semi-retired now. Although it has been six decades since he landed in southern France as an Army officer, the lifeless body of the young infantryman on the beach is what he remembers most about that day.

He and a group of veterans traveled from the United States to take part in the Draguignan ceremony and tour several of the old battlegrounds around southern France.

Many of the veterans are in their late 70s and early 80s. His trip to France might be his last time to pay his respects to the friends who died and those like the unknown soldier he saw on the shore.

Fewer veterans are attending annual commemoration ceremonies at overseas cemeteries because of old age. As a special tribute to a fading group of former warriors, France awarded 10 U.S. veterans the Legion of Honor.