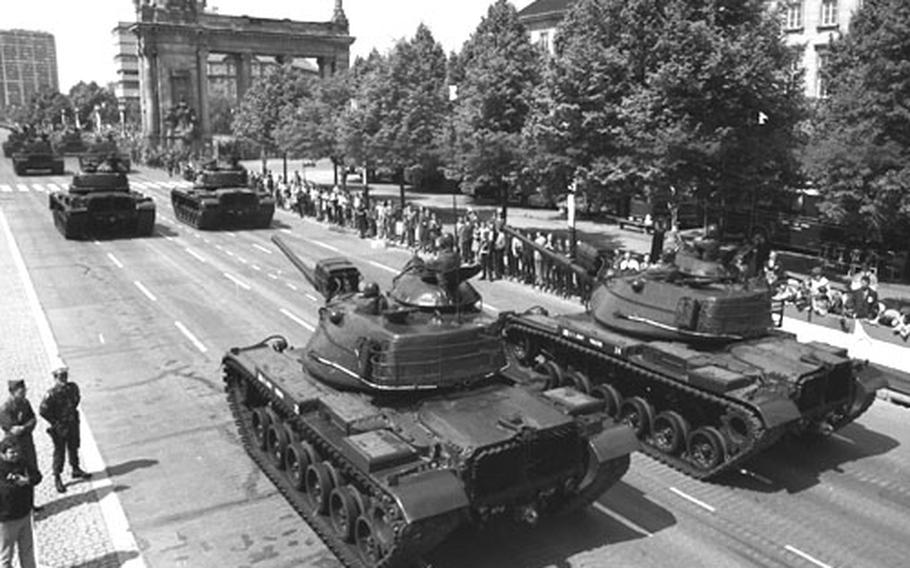 Tanks roll through the streets of West Berlin on Allied Forces Day, 1969. (Red Grandy/Stars and Stripes)

Tanks roll through the streets of West Berlin on Allied Forces Day, 1969. (Red Grandy/Stars and Stripes) 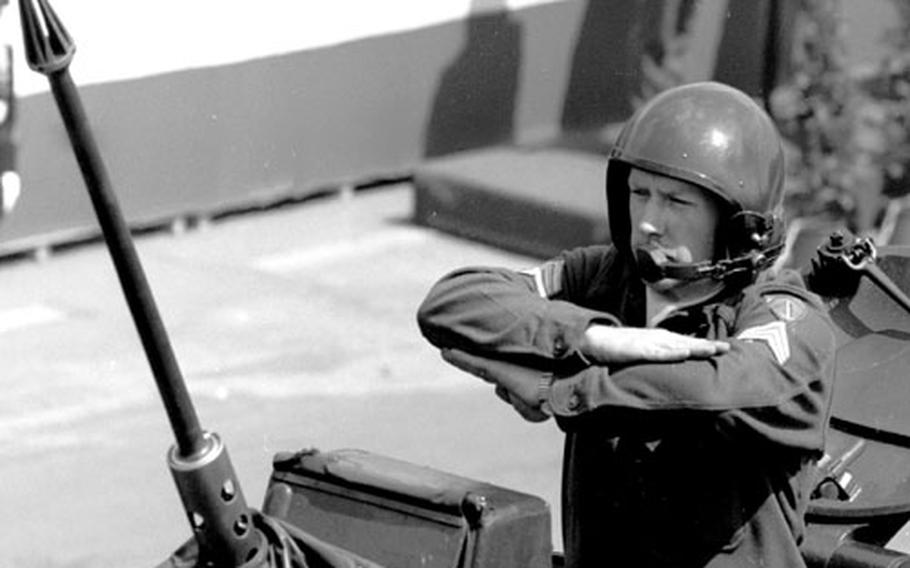 A soldier sits stiffly with his arms folded as his vehicle passes te reviewing stand. (Red Grandy/Stars and Stripes) Scotland's Argyll and Sutherland Highlanders made their first appearance at the annual parade, and followed their mascot, a Shetland pony. (Red Grandy/Stars and Stripes) 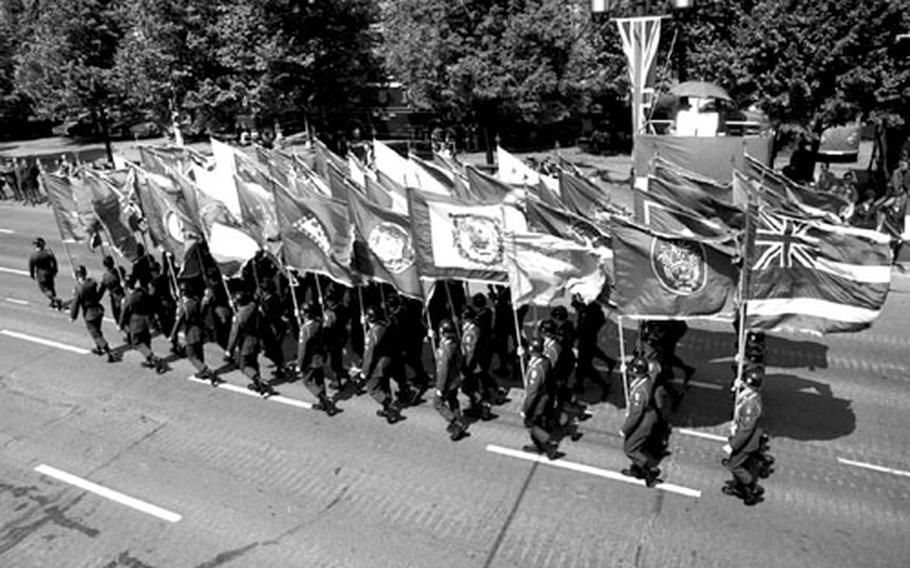 State flags on display at the parade. (Red Grandy/Stars and Stripes) U.S. personnel carriers bore the names of states — Montana, Kansas, Mississippi and others — and U.S. self-propelled artillery pieces were named for Berlin districts — Kreuzberg, Tempelhof, Zehlendorf and so on. The British disdained to parade favorite names in public at all, and the French showed names of districts like Beaujolais, Loire, and Alsace, and that of their favorite hero, Bonaparte, and some of the battles he won, Austerlitz and Moskawa.

The sun beamed from a blue sky decorated with cotton clouds as troops, bands and equipment marched and rolled between the Berlin Victory Monument and Ernst Reuter Platz for 1 hour and 10 minutes. The spectators were generally quiet, but they broke into applause for men of 1st Bn, The Argyll & Sutherland Highlanders with their pipes and drums, their dark green kilts swinging in rhythm behind their mascot, a Shetland pony. The colorful Scots are new in Berlin and it was their first parade here.

It was the year for the French to be in charge of staging the big march, and they labeled chairs for dignitaries of all the nations involved with "Monsieur" and "Madame."

A French band took position opposite the reviewing stand and played the national anthems of France, the United Kingdom and the United States.

A bystander noticed that division Gen. B. Huchet de Quenetain, the French commandant, was riding in a French car; Maj. Gen. F. J. C. Bowes-Lyon, commandant of the British sector, was in an English car, and Maj. Gen. Robert George Fergusson, U.S. commander, Berlin, was brought in a German auto.

The U.S. self-propelled 105s fired a 13-gun salute in honor of the ranking officers, the major generals. The colors of the three nations were hoisted into jeeps and ridden over the parade route.

Then came the motorized elements with their named vehicles and with members of each crew sitting stiffly with lower arms folded in front of them like yogis in contemplation.

The flags of the 50 states headed the American foot troops. The 2nd Bn and 3rd Bn, 6th Inf Div, and the 7350th Support Group from Tempelhof Airport marched to the music of the 298th U.S. Army Band, the USAREUR Band and the USAFE Band.