Allen may withdraw from consideration for top NATO post in Europe 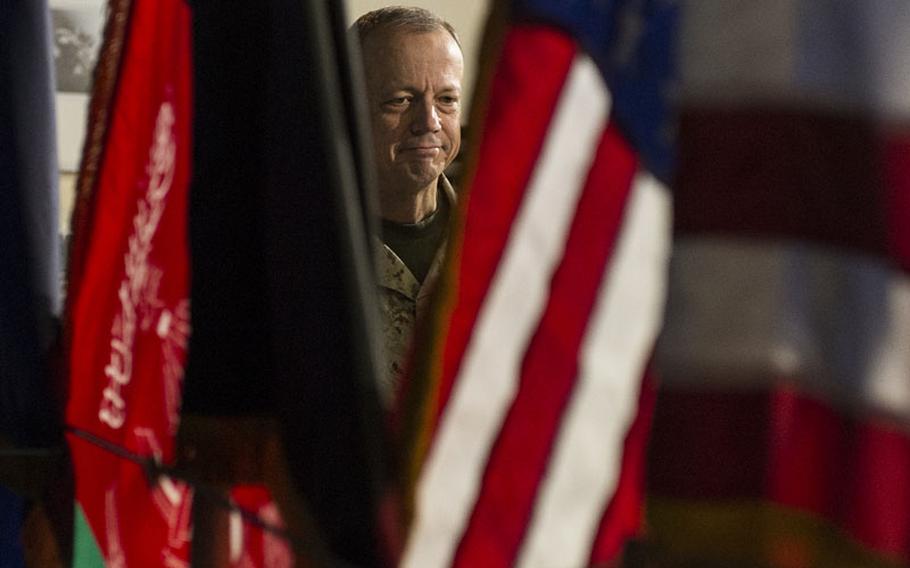 Defense Department investigators last month cleared Allen of suspicions that he carried on what was characterized as an “inappropriate” email exchange with a Tampa socialite linked to the adultery scandal that prompted the resignation of retired Gen. David Petraeus from his job running the CIA. Defense Secretary Leon Panetta placed the nomination on hold after the emails surfaced.

While the Obama administration considers Allen fit for the job, Allen has not decided whether he still wants it, a defense official told Stars and Stripes.

“After 19 months in command in Afghanistan, and many before that spent away from home, Gen. Allen has been offered time to rest and reunite with his family before he turns his attention to his next assignment,” the official said in a written statement.

According to a report by NBC News, unnamed officials said Allen does not want to subject his family to the nomination process, which would likely result in the email controversy being hashed out in the open.

Panetta ordered the Allen investigation in November after the FBI delivered what were described as more than 20,000 pages of emails and documents related to Allen and Jill Kelley, a Tampa socialite with close ties to high-ranking officers at U.S. Central Command headquarters at MacDill Air Force Base, Fla.

Kelley helped set in motion the exposure of Petraeus’ affair when she showed an FBI agent harassing emails anonymously sent to her by Petraeus’ mistress, Paula Broadwell. The investigation uncovered her exchanges with Allen.

Defense officials at the Pentagon last year said some of the emails could be interpreted as “flirtatious and inappropriate.”

The Inspector General’s office later zeroed in on fewer than 100 emails for close scrutiny, assigning an unusually large team of 15 investigators to comb through them in an investigation that was concluded with unusual speed.