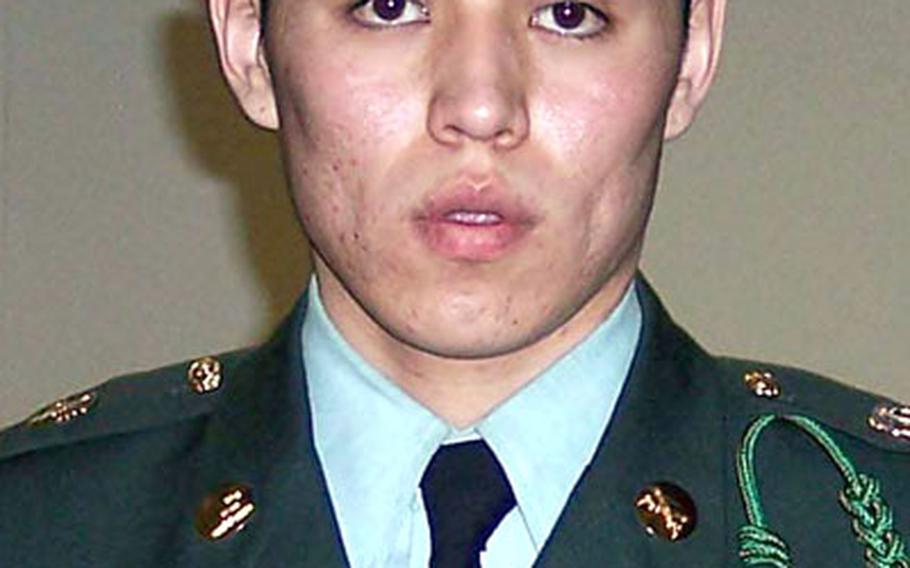 Pvt. Brandon I. Miller leaves the courtroom at Camp Casey Tuesday, the first day of his court-martial. (Erik Slavin / S&S)

CAMP CASEY, South Korea &#8212; Pvt. Brandon I. Miller threatened to kill two soldiers, pushed a sergeant on duty against a wall locker and strung together a pattern of unauthorized absences, prosecutors said at Miller&#8217;s court-martial Tuesday.

Miller, of the 2nd Infantry Division&#8217;s 4th Battalion, 7th Cavalry, was charged with four counts of unauthorized absence, failure to obey an order, resisting apprehension, insubordinate conduct toward a non-commissioned officer by assault and two counts of communicating a threat.

Citing lack of evidence, Judge Col. Patrick J. Parrish threw out two Article 92 counts of underage drinking and one count of violating curfew. A verdict was not expected until Wednesday.

Some of the lesser charges occurred in March 2005, when Miller was facing potential charges in the South Korean justice system.

According to testimony from witnesses at Miller&#8217;s court-martial, after further unauthorized absences in October and November, he was restricted to the Camp Casey/Hovey area and required to have an NCO escort at all times &#8212; something his sergeants nicknamed &#8220;Miller watch.&#8221; At one point, the sergeants were required to watch Miller while he slept.

Rodriguez said he was not seriously injured and reported for duty the next day.

Defense attorney Capt. Ryan Dodd attributed some of Miller&#8217;s transgressions to what he characterized as failings by Miller&#8217;s chain of command.

By not filing unauthorized-absence charges after they occurred on several occasions, commanders tacitly were authorizing them, Dodd argued.

Miller was accused of being on unauthorized leave in Seoul on Jan. 28 when he ran into his troop commander, Capt. Mark Tomlinson, the commander said.

Tomlinson testified that he ordered Miller to return to Camp Hovey. Miller was taken into pre-trial custody on Feb. 3.

Dodd also asked during jury selection whether a command is responsible for seeking help for an alcoholic soldier before the problem festers. His question received a mixed response from potential jurors.

Mansfield said he then handed the phone to Spc. Eric Shepard. Saying that Miller sounded drunk at the time, Shepard testified that he &#8220;threatened to cut my throat two or three times.&#8221;