Allegations of fraud investigated at U.S. base in Germany 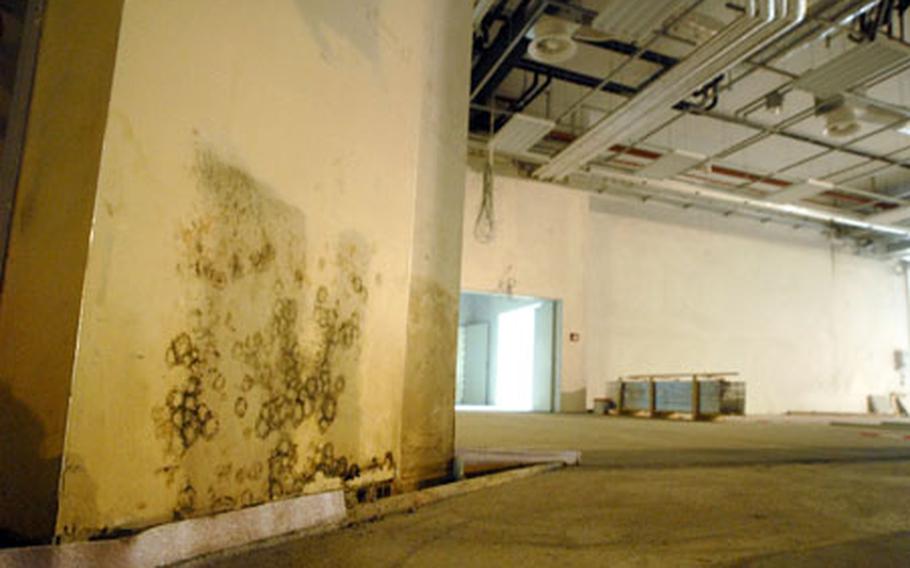 A faulty roof is to blame for mold in the newly constructed Power Zone section of the Kaiserslautern Military Community Center seen June 28 at Ramstein Air Base. (Ben Bloker / S&S)

A special team of six German investigators &#8212; one attorney and five police officers &#8212; is looking into the activities of the top officials in civilian construction and engineering firms involved in work on the base&#8217;s mall/hotel, runway and passenger terminal/ramp projects, Kaiserslautern&#8217;s leading senior public prosecutor Helmut Bleh, said Friday.

Multiple raids by German police have netted more than 2,000 documents since the investigation began in 2005. The investigation&#8217;s 20 suspects &#8212; including two U.S. civilian engineers &#8212; allegedly have bilked the U.S. and German governments of millions of dollars.

The alleged fraud centers on charging for work never done and providing trips instead of payment, Bleh said through a translator.

Those under investigation have denied any wrongdoing, Bleh said. So far, no one has been arrested for fraud, which carries a maximum sentence of five years in jail and hefty fines, he said.

On the military side, the Air Force Office of Special Investigations has confiscated computers and documents from the U.S. Air Forces in Europe&#8217;s office of installations and mission support.

&#8220;Once we have a full investigation completed, we will hand it over to the proper authority to make the proper charges, if that&#8217;s warranted,&#8221; she said.

At the center of the German investigation is the Kaiserslautern branch of German construction management agency of Rheinland-Pfalz, Landesbetrieb LBB.

The agency implements, manages and plans construction projects for foreign armed forces, including the U.S. military, according to its Web site. It does not, however, have its own construction equipment or construction crews, so work is contracted out, the LBB Web site said.

The top official at LBB-Kaiserslautern is under investigation, as are five other LBB employees, Bleh said. Twelve employees from German construction and engineering companies that worked under LBB are being investigated as are two U.S. civilian engineers, he said.

The fraud investigation of the Ramstein passenger terminal/ramp was expanded this year to include construction on the mall/hotel complex and a Ramstein runway. It could take at least another year to complete, Bleh said.

The U.S. House Committee on Oversight and Government Reform also is looking into the reason for delays and cost overruns in the construction of the 844,000-square-foot Kaiserslautern complex. The project, originally scheduled to cost $150 million and open April 2006, is being referred to as a $200 million &#8220;white elephant&#8221; by critics, including Rep. Henry Waxman, D-Calif., chairman of the House oversight committee.

Marcus Kl&#246;ckner contributed to this article.