All this and a foreign country, too? 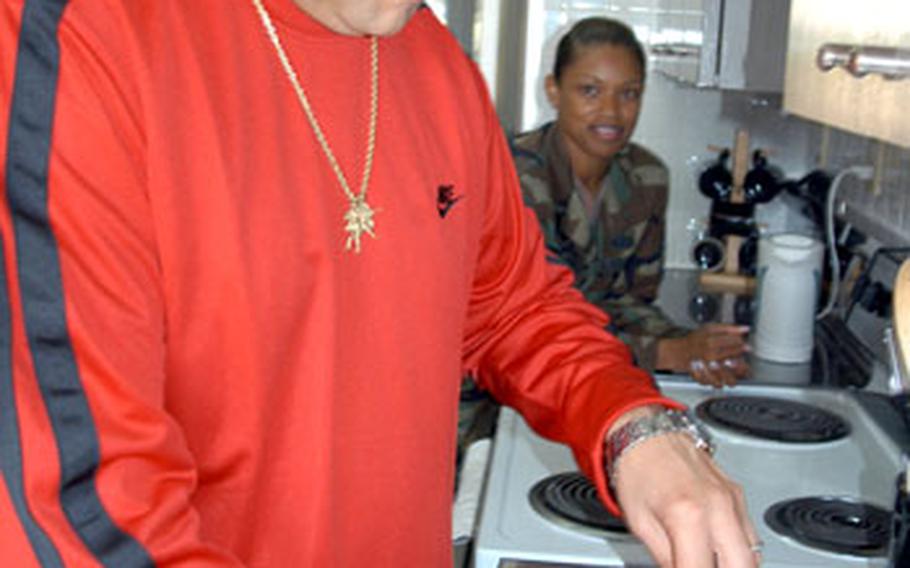 Senior Master Sgt. Duaine Trotman slices a grapefruit for his wife, Tech. Sgt. Suzanne Trotman, at their home at Misawa Air Base, Japan. Duaine recently returned from a four-month deployment to Iraq. Suzanne said the separation was difficult. "We&#39;re like best friends. I couldn&#39;t go to him for advice," she said. "I didn&#39;t want to burden him with my issues." If she needed support, she felt like the base would have provided it. (Jennifer H. Svan / S&S)

Getting military orders overseas can be a thrill &#8212; or a terror.

It can be an once-in-a-lifetime opportunity in an exotic culture.

But it&#8217;s also far away from the safety net of family and home-grown friends.

For married couples, especially young ones, the isolation, limited resources and unfamiliarity of life in a foreign country can be stressful, military officials say.

Frequent or long deployments can add to the strain.

&#8220;You don&#8217;t have the outlets that are available in the States,&#8221; said Adrienne Williams, with the Counseling and Advocacy Program on Camp Foster, Okinawa.

&#8220;You get tired of the limited routine here and start to engage in emotional disengagment,&#8221; she said. &#8220;You start feeling the distance [from the States] and the financial burdens and the lack of connection with support systems: family and friends.&#8221;

Back in the States, &#8220;if you want to take time off, you can drive across the country to see your family,&#8221; said Tech. Sgt. Suzanne Trotman, a financial analyst with the 35th Comptroller Squadron at Misawa Air Base in northern Japan, whose challenge of an overseas assignment was compounded by her husband&#8217;s recent deployment to Iraq.

And then there&#8217;s the language barrier.

&#8220;Some come here and just learn that they&#8217;re not compatible and coming to Okinawa is the breaking point,&#8221; she said. &#8220;Others learn that the military lifestyle is just not for them. They have to make sacrifices and so they sacrifice the marriage.&#8221;

In Asia, counselors, mental health workers and chaplains on U.S. bases may be the only resources for professional help, as the language barrier eliminates the recourse of therapy outside the gate.

Camp Foster&#8217;s counseling program is supposed to provide only brief, short-term support, but &#8220;we are constantly making exceptions,&#8221; Goldberg said.

Misawa couples seeking marital counseling also can be referred to a chaplain or the Military Family Life Consultant, a free, short-term counseling service the Air Force began a few years ago.

Military counselors and spouses both say that a good attitude and getting involved can make all the difference on an overseas tour.

And if you need marriage counseling, get it.