‘All it takes is one bad shot’ 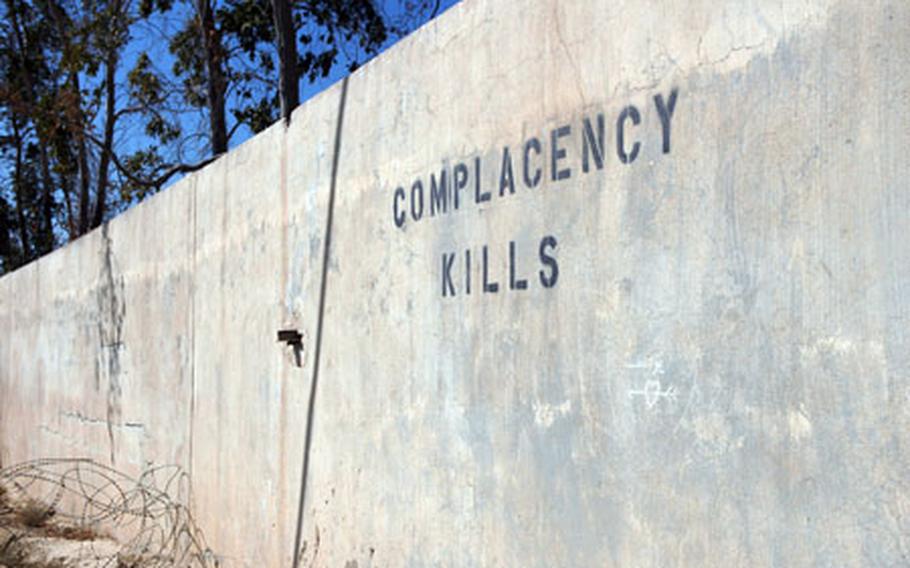 A sign at Camp Baharia in Anbar province warns troops against being lulled into a false sense of security. (Allison Batdorff / S&S)

RAMADI, Iraq &#8212; Platoon leader Lt. Nick Furloni usually says a few words about complacency before every mission. He may not use the &#8220;c&#8221; word exactly, but the sentiment is there.

Complacency is dangerous in a war zone.

And in Ramadi &#8212; where officials say the insurgency threat has diminished dramatically in recent months &#8212; leaders warn soldiers against being lulled into a false sense of security. Reminders that &#8220;Complacency Kills&#8221; are scattered around the base.

The roughly 6,000 American and Iraqi troops in Ramadi have gone 125 days with no attacks, officials said, down from a high of 30 attacks a day earlier this year.

No car bombs have been used against the troops since March and roadside bomb attacks dropped 99 percent since the brigade arrived in January, according to statistics from the 1st Brigade Combat Team, 3rd Infantry Division.

Many troops in Johnson&#8217;s command also have been in country over a year as the Army extended the tours from 12 to 15 months midtour.

Time and repetition of task also increases complacency potential, said Col. John Charlton, commander of U.S. forces in Ramadi. He cautions his leaders to remind soldiers to treat every patrol like it&#8217;s their first.