All in a day’s work: Vets deal with bites, spitting in Djibouti A Djiboutian herder pries open the mouth of a reluctant patient as Capt. Catherine Williams, an army reservist and veterinarian, applies a treatment. (Zeke Minaya / S&S)

A Djiboutian herder pries open the mouth of a reluctant patient as Capt. Catherine Williams, an army reservist and veterinarian, applies a treatment. (Zeke Minaya / S&S) An Issa herder tends his flock. With no arable land, many Djiboutians depend on goats, sheep and camels for milk, meat and trade. (Zeke Minaya / S&S) A pen full of goats waiting to be treated for parasites and given vitamin boosters by an American veterinarian team in Gabla Galan, Djibouti. (Zeke Minaya / S&S) 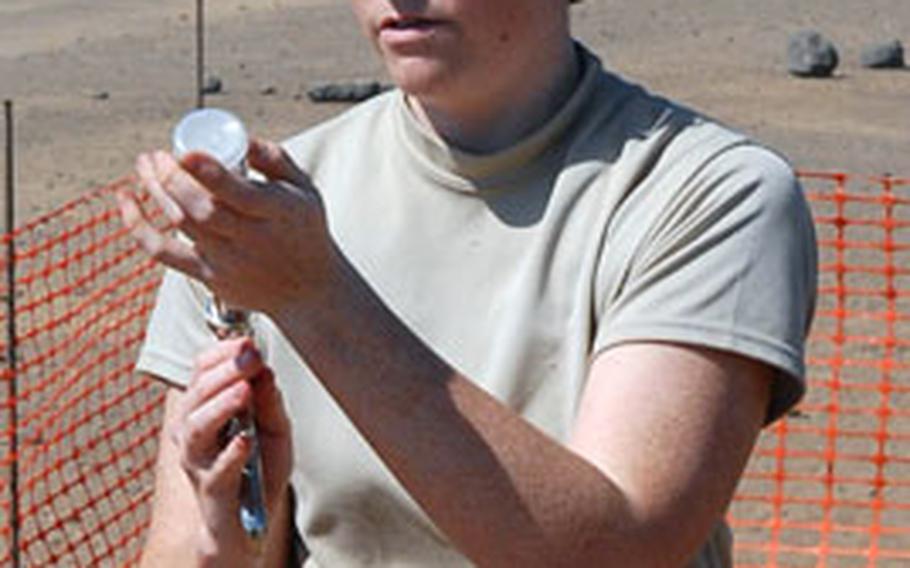 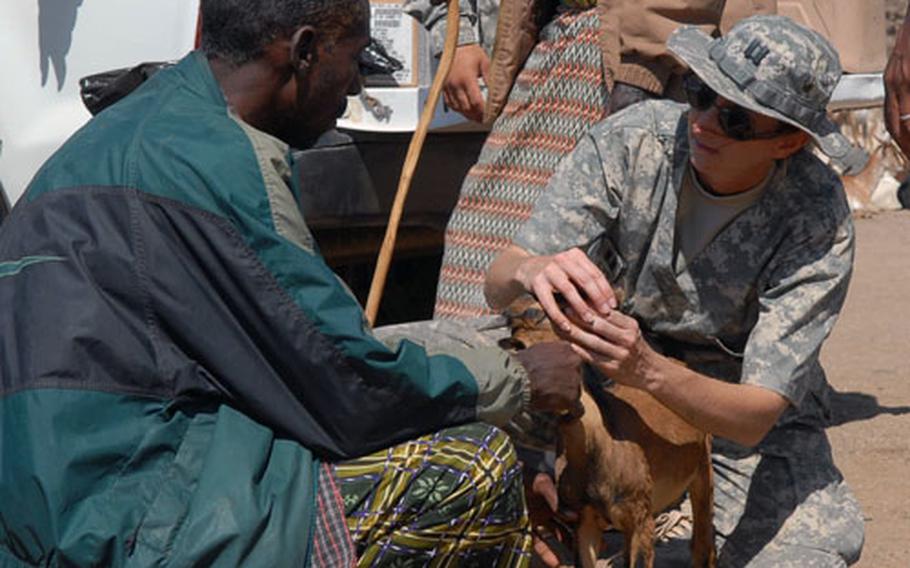 With no arable land to speak of, much of the population outside of the capital city and its busy port eke out a meager living from animals, mainly goats, sheep and camels.

The health of a herders&#8217; flock is not merely a matter of prosperity or paucity for the families dependent on the pastoral economy. It can be a matter of life and death.

The U.S. military mission in the Horn of Africa calls for the promotion of stability in the region. In Djibouti, that translates in part to providing medical care for the livestock that are depended upon for meat and milk. Since January, the 350th Civil Affairs Command, Functional Specialty Team has provided veterinarian service to more than 35,000 animals.

The Army reservists, out of Pensacola, Fla., have trekked deep into the remote corners of Djibouti &#8212; often taking jarring car drives over pitted, rutted roads in service of their mission. And many Djiboutians have eagerly taken them up on their offer of assistance.

But the willingness of the patients is another matter.

Bites and kicks from riled goats and donkeys are a hazard of the job, as well as flying spit from the occasional ornery camel.

On Sunday, Hamilton and other members of the veterinarian mission traveled 36 miles south of Camp Lemonier, home to the Combined Joint Task Force &#8212; Horn of Africa, to Gabla Galan, a region of scattered stone huts and rocky hills. The unit drove over a parched and cracked riverbed to a watering hole where herders had begun to gather with their flocks. It was the unit&#8217;s third trip to the location.

Herders and their flocks appeared on the horizon walking through the undulating waves of rising heat.

&#8220;Some of these guys travel a day and a half to get to these water sites,&#8221; said Air Force Maj. Duane Webster. The 44-year-old native of Billings, Mont., has been working with the 350th. In assessing the importance of livestock in Djibouti, Webster repeats an often cited comparison and said &#8220;goats and sheep are the pocket money and camels are the 401(k) plans.&#8221;

Said Miguil, a 35-year-old Issa herder, said he has brought his goats to the Americans on several occasions.

When asked how long he had made his living tending goats, Miguil smiled and said 35 years. His way of life, he said, was handed down to him from his father as, he expects, his son would follow in his footsteps. &#8220;This is a normal life for us,&#8221; he said.

Several herders huddled around translator Aden Ismael Hersi, who listened intently. &#8220;They are saying that they are having trouble with hyenas (attacking their animals),&#8221; Hersi said.

The stress on the animals from the predatory attacks and lack of water may have touched off health problems among some of the herds, the Americans said. There has been a rash of early births, some resulting in the death of both parent and offspring.

&#8220;If the herd is continuously under a lot of stress, this can happen,&#8221; explained Capt. Catherine Williams, an Army reservist and veterinarian out of Rockville, Md.

The unit comes equipped with treatments for parasites and a vitamin booster. They are clearly experienced hands at their job. The veterinarians and their assistants climb into a makeshift corral and quickly apply injections and topical medicines to flock after flock. After several hours and more than 500 patients, they are done for the day.