All hands on deck: Sailors off to Middle East in growing numbers 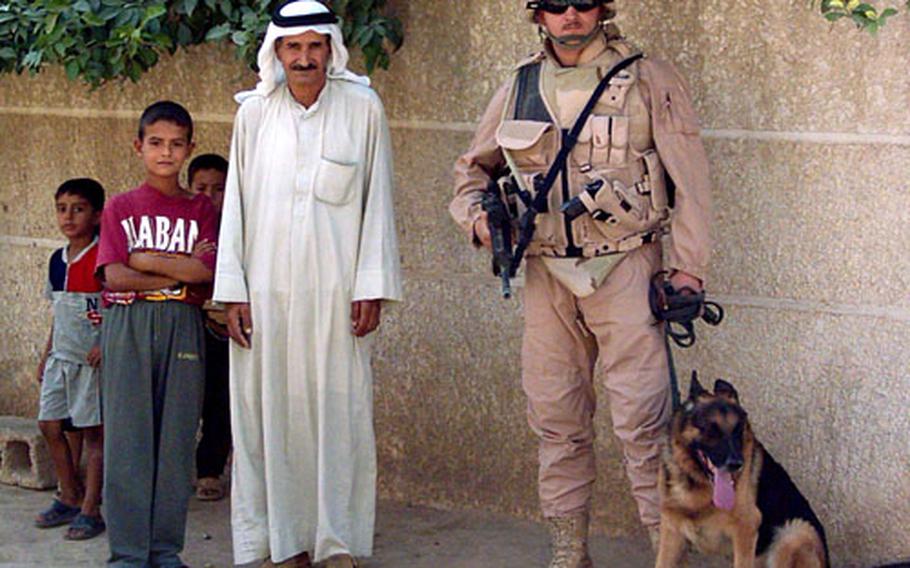 Petty Officer 2nd Class Robert Farlow, a dog handler and master-at-arms, and his dog Art, both with the Yokosuka security department, deployed during 2005 to Iraq with two Army combat units under the Navy’s Individual Augmentee program. (Courtesy of Robert Farlow)

The Navy&#8217;s hospital at Yokosuka is missing 20 staff members.

Another 16 have departed other commands at Navy bases across Japan.

The 41 sailors are deployed to the Middle East and Africa as Navy Individual Augmentees under a Pentagon program to spread the burden of supporting operations there.

The number &#8220;has doubled in the last two months, and it&#8217;s only going to get worse,&#8221; said Lt. j.g. Michael McPhearson, Commander, Naval Forces Japan regional force protection officer. He fills requests for augmentees in Japan.

Navywide, 2,695 sailors were made augmentees at the start of fiscal 2006 compared to 637 the prior fiscal year, according to the Augmentation Division of the Bureau of Personnel.

The command expects that number to quadruple in the near future, to 10,000 sailors, according to a report from the director of the Navy&#8217;s Augmentation Division. And as the Navy runs short of sailors in the States, it will continue to look overseas to fill those positions, McPhearson said.

Augmentees deploy for either six months or a year, plus travel time and five weeks of training.

The absence can be a burden on home commands, which not only lose people but pay for much of augmentee sailors&#8217; deployment costs.

At the hospital, half the preventive-medicine staff received deployment orders within a week&#8217;s notice last year, said Capt. Greg Hoeksema, executive officer. The remaining half, three sailors, took over their responsibilities, including a senior chief who added junior sailors&#8217; duties to his leadership ones.

To compensate, the hospital has had to change the process for leave requests.

&#8220;We kind of reworked how we do business,&#8221; Hoeksema said. For the summer vacation season, just two practitioners in the family practice department will be able to take leave &#8212; one because he&#8217;s getting married, Hoeksema said.

The losses have been manageable so far but if they increase, the hospital might be forced to cut services or hire contractors to fill in, Hoeksema said.

But despite the burden, the hospital is managing.

But deployments also affect those who are leaving and their families. Individual sailors deploy alone, often lacking both experience in hostile environments and some of the support infrastructure that Army and Marine combat units receive.

Their families also must cope with a relative lack of support, some say. Petty Officer 2nd Class Robert Farlow, a master-at-arms and dog handler, said his 2005 deployment to Baghdad &#8220;was very difficult&#8221; for his wife.

Navy spouses have plenty of help for when sailors are at sea, but Farlow said his wife knew no others with a husband at war.

Farlow said he couldn&#8217;t resist the opportunity to help in Iraq, as he watched explosives continue to claim lives &#8212; explosives his dog is trained to detect.

He volunteered before a job even opened up and credits the augmentee program with giving him special opportunities &#8212; including working with soldiers who often called him &#8220;sarge&#8221; &#8212; an equivalent rank to his second-class petty officer status. He even earned an Army Commendation Medal.

Several weeks of training in the States helped ready him for Iraq, but Farlow said being a sailor definitely was a disadvantage: &#8220;Soldiers and Marines, their core training is going into the field.&#8221;

Farlow said feedback from augmentees is helping to shape the program to better prepare sailors.