All dogs have their day, it's Lassie's turn now 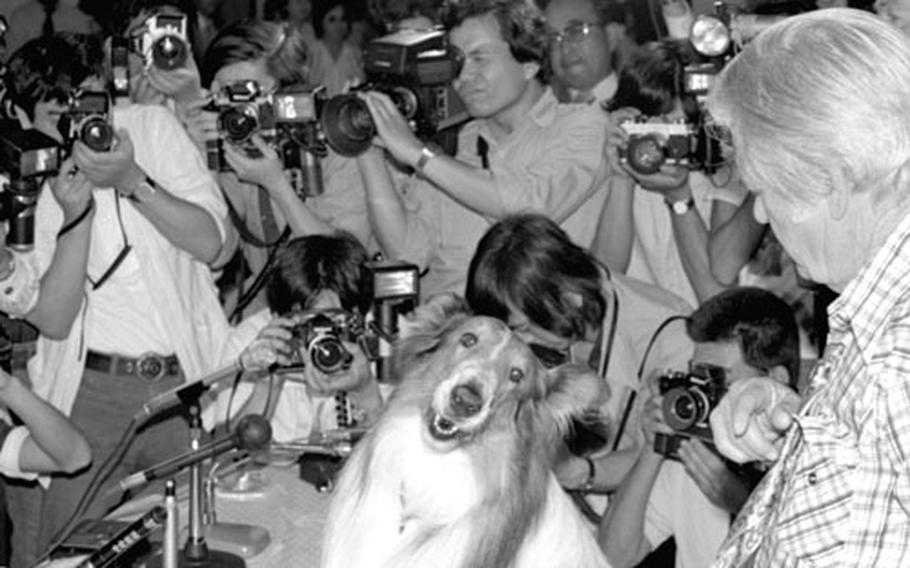 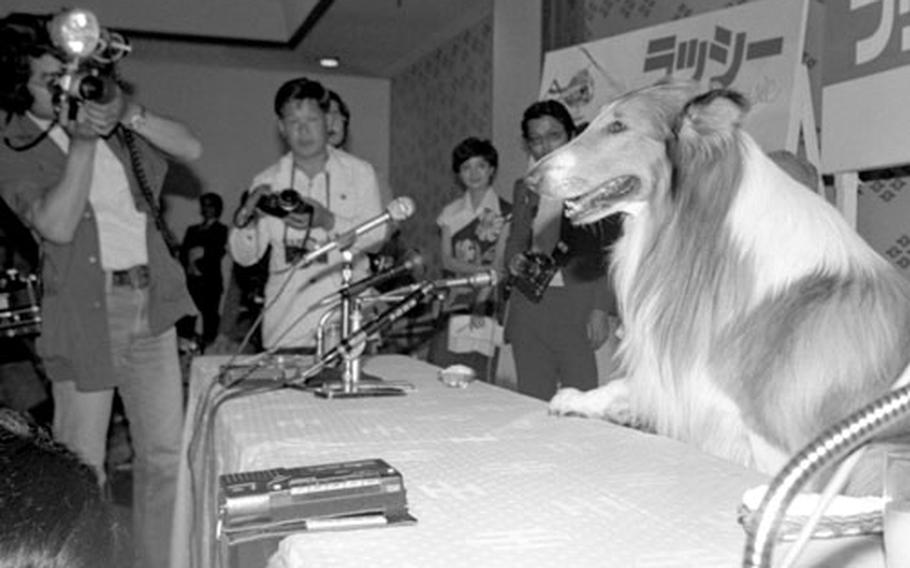 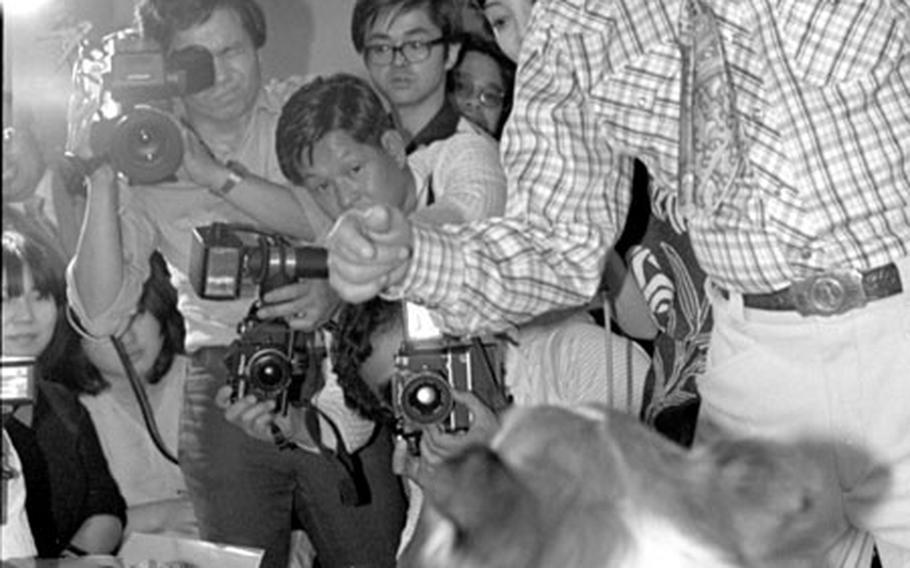 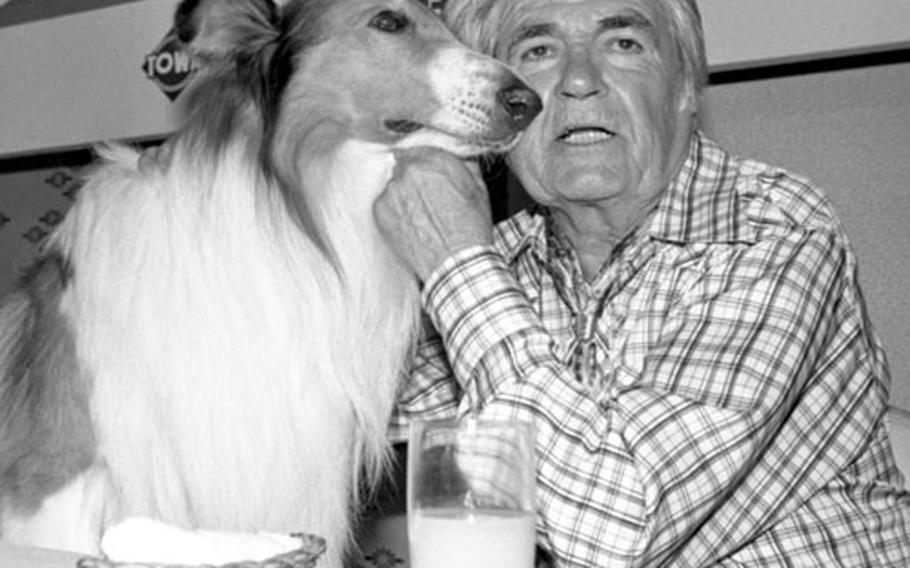 TOKYO &mdash; Don't tell Rod Stewart or Sophia Loren, but they have been one-upped by a dog.

Not just any dog, of course, but perhaps the most famous dog in the world &mdash; Lassie.

Lassie held a press conference in Tokyo's Imperial Hotel, similar to conferences recently held by Sophia Loren and Rod Stewart. Both stars would have been proud to have had the turnout Lassie did. Several reporters and photographers remarked that such a crowd was indeed rare.

The purpose of Lassie's visit &mdash; his first trip abroad outside of, Canada &mdash; is to promote his new film. The film, due for release in July, is titled "The Magic of Lassie." It stars James Stewart, Mickey Rooney, Michael Sharrett and Stephanie Zimbalist.

Music for the film is by Richard and Robert Sherman and sung by Pat Boone and his daughter Debby. It is produced by Bonita Granville Wrather, who also produced the television series.

The movie's storyline is very similar to that of "Lassie Come Home," the book by Eric Knight in which Lassie made his debut. The book, translated into more than 20 languages, is required reading in Polish schools.

Unfortunately, Knight died before Lassie became an international star. He was killed in 1943 in Dutch Guinea while serving. with the Army Air Corps.

In Knight's book, Lassie is a female but the modern lassie is male. According to trainer Rudd Weatherwax, all the Lassies have been male. He should know, he's trained all six Lassies since the first ore appeared on the screen in 1943.

"In most species of animal," notes Weatherwax, "the male is the most beautiful and that's why we use males. Females are smarter, but males are prettier."

Weatherwax says all the Lassies are descendants of the original dog. "They are father-son, father-son," he says.

The current Lassie, now 3&frac12; years old, is the grandson of the Lassie most people remember from the television series which starred Tommy Rettig as Jeff.

Weatherwax says Lassie's father and grandfather are both alive and all three dogs share 7&frac12; acres in Malibu. He says the grandfather is now about 17 years old and the father is about 15.

Weatherwax says the dogs have made him a millionaire and that he couldn't imagine a more pleasing way to earn it. He's an animal fanatic. He says he has several dogs and cats and even lets five sleep with him.

In all the years he's worked with the collies, he says he's never had a dog refuse to do a stunt or was unable to teach a dog a trick. He notes that several times the dogs have had to work with fire and, for that stunt, camera tricks are used to make the fire appear closer to the dog than it really is.

Now and then, Weatherwax has to dream up a trick of his own to get the dog to do his stuff on cue. "James Stewart and Lassie got along great," he says. "Lassie loved him and he loved Lassie. But, for some reason, Lassie wouldn't kiss Jimmy. We solved that by putting gravy on Jimmy's face."

Weatherwax says that none of the many stars who have worked with Lassie minded sharing the spotlight with a dog. Elizabeth Taylor and Mary Pickford especially got along well with Lassie, he says.

Lassie; too, gets along well with the other stars. Like them, he's a pro and knows what he has to do. That is Weatherwax knows what Lassie is supposed to do and he knows how to get him to perform. "All it takes is love, love and praise. A lot of praise," he says. Weatherwax uses signals from off-camera to direct Lassie and he talks to him with "baby talk"

But he says Lassie is not babied or pampered despite his first-class airline seat and his suite at one of Tokyo's most expensive hotels. "He gets fed only once a day," he notes.

Lassie's groom, Kathy Webb, says she doesn't even put egg in Lassie's food or do anything else special for his coat. "The most important thing in grooming a dog," says Webb, "is to brush the coat regularly &mdash; with a high-quality brush." She emphasizes the "high-quality." Cheap brushes don't work, she says.

While in: Japan, Lassie will also be making some television commercials, just like other big-time stars, such as Paul Anka, Kirk Douglas and ... you guessed it ... Sophia Loren.